A Parable of Male Entitlement, As Told Through The DC Extended Universe 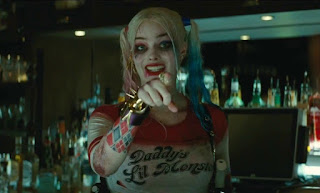 With the release of AVENGERS: INFINITY WAR in a little less than a month, loads of people are undertaking a deep dive through the Marvel Cinematic Universe to prime themselves for the self-styled "biggest crossover event of all time."

Being the contrarian that I am, I rented JUSTICE LEAGUE a few weeks ago off Google Play - perhaps the saddest crossover event of all time.

Whereas INFINITY WAR will be the culmination of a decade of solo-movie germination and smaller crossovers, JUSTICE LEAGUE was the culmination of... uh... one solo movie, one cross-over movie (one character of which hadn't had a solo movie, and another appeared in a mostly silent cameo largely relegated to the finale), and a prequel origin movie set a century before both former films retrofitted into continuity.

And hell, I'm leaving out another DCEU (why is it extended? Extended from what? The bafflement starts at the damn title of the thing!) building block: SUICIDE SQUAD.

SQUAD and LEAGUE don't just have in common that they're team movies, they're also two of the most visibly studio-tampered blockbusters of the last half-decade at least. An awkward mix of David Ayer's regular toxic macho crime movie squeezed into a comic book movie straightjacket (no Harley-pun intended) and a GUARDIANS OF THE GALAXY style "weirdo outcasts form a makeshift family to Your Dad's Favorite Radio Hits" SQUAD felt as fractured as the mental state of its clownish leading lady.

I... rather enjoyed both, with the caveat that I realize they are literally the death of cinema as an art form incarnate (Ben Affleck's smile when Superman shows up to the final fight is one of the greatest cinematic Batman moments, I swear to Highfather). But I am not actually here to discuss these films, friends! Nay, I am here to talk about how these two trainwrecks ended up being a fantastic showcase of male entitlement in my personal life.

A few months ago, a (male) social media acquaintance claimed that SQUAD was actually a great movie, and that people/critics/whoever just didn't... THINK about things. About the TRUE MEANING of a seemingly silly film... For you see, during a lull in the action just before the climax, the team is sitting around in a bar regrouping, and wondering why they're bothering to save a world which treats them as monsters. Harley Quinn urges them to "own that shit," that a normal life was never in the cards for any of them, and they should just live it to the fullest to whichever extent they can. Harley's statement resonated highly with this acquaintance who had suffered with depression on and off, and cemented SQUAD as a Maligned Misunderstood Good Film in his eyes.

And, you know, that's perfectly valid. I enjoyed it because it made me laugh, it was over-the-top and kind of pathetic in its try-hardness; he enjoyed it because he felt it spoke to him as someone with depression. Hell, if anything, his reasons for enjoying it are far purer than mine!

Fast forward to my wife and I watching JUSTICE LEAGUE.

In one of the film's many, many subplots Lois Lane and Superman are reunited after the latter returns from the grave (lol that whole sequence oh my god). As the iconic lovers embrace, Lois Lane tearfully admits that she "hasn't been brave," and how she's embarrassed at having let things go, and fearful he'd be disappointed in her. And indeed, in her introductory scene earlier in the film we were shown that, since Superman's "death," she hadn't been undertaking the hard-hitting journalism so closely associated to Lois Lane.

As Lois and Clark snuggled in that cornfield, I suddenly noticed my wife was sobbing. Somewhat flabbergasted considering we had been giggling and talking throughout this entertaining disaster, I asked her if she was alright. Turns out, Lois' breakdown over her "inability to be brave" in the absence of Superman struck a nerve. Thanks to the clarity of the "Lois is slummin' it" subplot (even if it was just one scene), and Adams' performance (as with Robbie in SQUAD, far above the level required for the film they were appearing in), the movie briefly managed to connect emotionally as it showed a woman professional at the top of her game breaking down over her self-perceived weakness; the death of her partner caused her to show a crack in the façade many an activist on social issues feel they must project - that the cause is what keeps that inner flame burning. That, while they intellectually know it is valid to give up once personal tragedy hits, they secretly hope they could continue the struggle, even as they would forgive anyone else for quitting.

Once the Lois and Clark scene was over, however, my wife and I went back to giggling at the silliness. The only manner in which she expressed herself about the film afterwards was to indicate how amazing Affleck's Superman-lovin'-Bat-Smile was and how terrible the CGI on Cyborg.

SQUAD guy had his moment of connection and made an expansive statement on social media that SUICIDE SQUAD Is Good, Actually -- and people don't realize that because they "don't think about what they consume." He's kind of a big shot in the Low Countries tabletop RPG and LARP world, so you'd think he has a grasp of the concept of theme as one of the basic elements of story, and that anyone who works with stories on a professional or even dilettantesque level knows this as well. But no, apparently none of the people who disparaged SQUAD were aware of its secret bounty of thematic richness.

A woman saw a soulless golem of a movie that features a scene that honestly works for her - she reacts sincerely, processes it with a loved one and moves on.

A man saw a soulless golem of a movie that features a scene that honestly works for him - he goes on the internet to proclaim Everyone Is Wrong And Dumb for not liking this movie The Correct Way.

Now honestly, while I do believe there is a glimmer of hope here - in that there's emotional truth in the most artistically barren of places - I can't help but be wryly amused about that there dichotomy.

... cuz if that ain't a perfect encapsulation of geekdom, you can boom tube me straight to Belle Reve.