Trans Merlin: Legend of the Headcanon 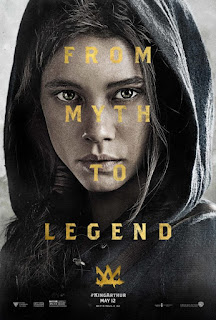 The character referred to only as "the Mage" in Guy Ritchie's 2016 film KING ARTHUR: LEGEND OF THE SWORD, portrayed by Astrid Bergès-Frisbey, is in all likelihood neither trans nor Merlin. I know this full well.

The text of the film is ambiguous about her backstory: she claims to have been sent by Merlin to help the exiled Arthur (Charlie Hunnam, of course) to reclaim his throne from his uncle Vortigern (Jude Law). Said uncle had, at the start of the film, entered a secret alliance with evil mage Mordred (Rob Knighton) to overthrow Arthur's daddy Uther Pendragon (Eric lollin' Bana).

This is told to the audience in a montage (Ritchie gonna Ritchie) with a VO split between the Mage and Sir Bedivere (Djimon Hounsou), one of the late Uther's knights turned resistance leader. The montage details the origins of Excalibur, Arthur's magic sword forged by Merlin from the KING OF THE MAGES' staff after Mordred's hostile take-over.

This is an ADR'd-up montage that FOLLOWS another montage of Arthur proving himself in THU DARKLANDS, after Arthur had an exceedingly long section of "I ain't no King, mate..." call-refusing. In short, it absolutely reeks of re-shoots.

In this montage wherein Merlin forges Excalibur (which in no way resembles the creation of the One Ring), his face is obscured. The only visible feature we see is long, brown hair.

Considering the movie hadn't been terribly concerned with the tenets of fluid-at-best Arthurian myth (Vortigern as the big bad, Mordred relegated to a prologue, cutesy 'ard lad names for everyone), I was starting to get my hopes up for a proper mix-up in the reveal that one of the most famous greybeard wizards of all time was a girl in this one, kind of like the Liam-Neesons-isn't-just-working-for-Ra's-Al-Ghul twist in BATMAN BEGINS.

No such reveal came. We never learn her identity, even after a scene where the cutesy nickname 'ard lads are revealed to be such-and-such recognizable Knights of the Round Table. The movie follows this with a swooshin' helicopter shot to a mounted Mage mysteriously looking down upon Camelot from a nearby hilltop.

No "And I am MERLIN!" reveal here? After like five "btw this guy is this guy" reveals? Nope! Just a mysterious/ominous gaze upon newly liberated Camelot and credits.

No doubt this would-be franchise launcher would have delved deeper into the Mage's identity* and perhaps gotten a Big Name for Merlin (Size of Name dependent on box office performance of the first one). But yeah, that didn't happen and this is the only one of Guy Ritchie's King Arthur movies we're likely to be getting.

Given all the above information, the Mage being Merlin herself is not a reading that contradicts anything the movie presents. Why trans? Well shit, Merlin is a long-lived magic-usin' motherfucker, and since the movie posits that times are dangerous for mages in general and Merlin in particular, so in a pre-HRT world a cool person like Merlin would be like "time to present femme for a few centuries!"

I don't even particularly think that the Mage is a super cool character -- she's a pretty standard mysterious powerful mage. She does some cool shit, but she's "stoic and silent" mostly.

Why do I choose to read the movie like this then?

Think of all the trans characters you've seen in recent popular media. Chances are:

You will probably not see them as powerful wizards like my personal reading of this movie.

Nor as special forces operatives, brilliant scientists, scumbag CEO villains, ... any old stereotype that our genre movies are full of.

Remember when the lead characters in Star Wars for decades were:


And then they COMPLETELY flipped the script on THE FORCE AWAKENS by having a lead that was:

Holy shit, what a complete inversion of expectations of what a Star Wars lead looks like! I sympathize with all who felt discombobulated about everything they thought they knew about this saga... and I applaud the incredible risk Disney took when they relaunched one of the most succesful (critic-proof) sagas of all time with a lead that was SO DIFFERENT from the standard.

All jokes aside, I thought Daisy Ridley did a great job as Rey and I cried a little the first time I saw a girl fire up the lightsaber in the climactic duel of a Star Wars.

I didn't particularly care for the 2016 GHOSTBUSTERS, but I acknowledge that it is rare to see movies that feature four women in action/adventure situations, two of which are fat, one of which is fat AND black. As sure as I cried when that girl fired up that lightsaber and started flailing against that gut-shot goth, I'm pretty sure many big gals (of color) had that same feeling of empowerment when they saw the new Ghostbusters cleanin' up the town.

I don't believe in my lifetime I will see a canonically identified trans wizard summon and telepathically control a giant snake*** to attack an evil king's castle. So I read that into it, and it made an alright movie a little more special to me.


*early reports on the movie listed Bergès-Frisbey being cast as Guinevere, but nothing in the film states that, and she isn't credited as such

***that's what happens in the movie, forgive the subtext