Sherlock Holmes and the Emotional Apocalypse

This post will contain spoilers for Sherlock s4e01, The Six Thatchers, straight out the gate. Read on at your own peril. 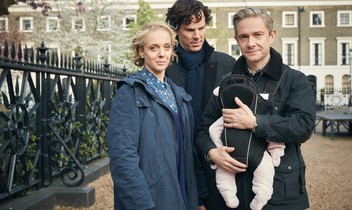 At this point, I'm inured to the fact that a Moffat show killed/depowered/threw aside a female character as gristle on the angst-mill of a cishet white male lead. I might as well be waving placards at a Michael Bay premiere, rallying against glistening bronzed butts. I knew what I was in for, after half a decade of Moffat shit.

Well no, that's not entirely true. After five years of fans critiquing these very tendencies, the Doctor Who and Sherlock showrunner still pulling that old shit does grate.

But if you insist on revisiting such backward patriarchal bullshit, you better do your job properly to make me forgive it. Shane Black reminding me his ex-wife's a bittcchhhhh is at least countermanded by Ryan Gosling and Russell Crowe doing funny pratfalls.

What is death for a mystery?

The mystery tale dangles clues in front of you, shows you paths through a maze that the attentive viewer/reader/listener might choose, hoping to get at the center of it at the same time as the characters do.

Personally, I don't even mind solving a mystery before the characters do (although, even here, there are limits, of course). No, what a mystery can truly never recover from is the viewer coming up with a path through the maze that leads to the center and is more interesting than the path it actually turns out to be.

Episode writer Mark Gatiss -- a lovely actor, competent writer -- spends the start of Sherlock's return retconning Sherlock's exile and murder of a lecherous blackmailing media magnate at the end of last season. This is stuff that honestly could have been done at the end of that particular season, and a good example of stuff not as cool as something the viewer came up with.

Instead of sending Sherlock into exile for 5 minutes, then immediately retrieving him because Poorly Photoshopped Moriarty Frames were threatening London, Mycroft could have just collected Sherlock and John, expressed disappointment at his little brother, and made the bad press go away in a few lines.

Dark ending? Sherlock knew that he had been outfoxed by a sweaty pervert and forced to resort to common, plebeian murder he knew he could get away with being Mycroft Holmes' younger brother; invoking privilege he tried going through life never having to call upon. Now he had, and Mycroft and John both knew it.

That's all stuff that could have happened last season, freeing up some time for this season's case.

What drew me to Sherlock in the first place were the twists on old tales, where they started with a concept vaguely similar to the old short stories concept, but soon twisted it into modern updates with wholly different outcomes, with the occasional amusing easter egg for Doyle fans (my favorite being the spooky flashlight signals on the moors in the Baskerville episode actually being used by enthusiastic doggers rather than shadowy conspirators).

Last season, however, the focus strongly shifted from detective stories to melodrama and family comedy. At first, I found this rather amusing. From its inception, the show had more than its fair share of fans who didn't much care about the mystery side of things, as much as the possibility of Sherlock and Watson (or Sherlock and Moriarty, or Mycroft and Lestrade, ...) hooking up and being catty gay roomies. It was the emotional interplay that was finding strong fan resonance, with Sherlock's emotionally distant "high-functioning sociopath" gently opened up (haha) by gentle everyman John Watson.

This fan-imagined relationship took place in a non-canonical alternate universe and was dubbed "Johnlock". Moffat even acknowledged the shipping fandom in the first episode of season 3, with a shaking fangirl expressing what she thought happened on that roof between Sherlock and Moriarty during the season 2 finale, culminating in a near-kiss.

The fact that it was a near-kiss is important.

Proving beyond a doubt that the creative team was aware of what the Sherlock fandom craved then, were these two things:

1) moving away from a case-based narrative towards one where main character emotional catharsis was crucial;

2) the "crazy fangirl" gag, seeing homosexual relationships where none existed.

Sure, Moffat and co said. We'll start chasing the feelz if that's what they respond to. But hahaha come now chaps... none of that homo shit... this IS a high profile BBC show...

The introduction of Mary Morstan, Watson's wife from the books, and the updating of her character as a special forces operative didn't especially bother me. Nor did the devotion of an entire episode to "Sherlock being cute and awkward at John and Mary's wedding" -- especially rich since a season is only three episodes.

The characters and melodrama coming to the forefront were essentially fair game in my eyes, since Sherlock, like Batman or Zorro or Dracula, is such a cultural archetype at this point that if your particular spin is "silly sitcom Sherlock", so be it.

The Six Thatchers depleted all my patience reserves.

Constant dramatic declarations, preposterously self-involved speechifying, grimly determined walking away from the camera as symbolic effects are overlaid around a character's face... Unlike Doctor Who, that other Moffat show, however, the fate of the universe is never in the balance. Because it works for Who, though, Moffat & co seem to want to employ it here. What such grandiosity turns a show about two characters into, is self-importance. And it would be hilarious... if it weren't in service of a show that has time and again shown its contempt for an acknowledged queer and female fandom.

We will turn it into a soap opera, as that's what you like, but let us remind you that these two men are what's truly important in it.

Sherlock's characterization as an aspie Mary Sue who may not understand all these human emotions but gosh dangit he will protect his loved ones at all costs... would be ridiculously entertaining if it weren't in the service of such heteronormative pap.

John Watson suffers most of all, as at one point during the episode I wondered "Wait, has Watson actually done anything likeable or funny at all so far?" Mind you, this was before we get to know he has a totally non-suspicious affair. Watson cheating on his wife! Because she lied to him about being a hard ops woman! The affair is not with a man, obviously.

Again, melodrama over detective work doesn't phase me in the least. In fact, it could make for a highly amusing show with the right anything-goes attitude. Unfortunately, only one thing goes: the emotional lives of the two cishet white boyz at the center, and anything else must go.

My most cynical self looks at the status quo at the end of The Six Thatchers and sees another middle finger at the fandom: single parent John and guardian Sherlock in an antagonistic, emotionally fraught relationship, calling to mind the more angsty parts of "Parentlock", an alternate universe conjured by fans in which Sherlock and Watson are, indeed, parents. The son, Hamish, is even sort-of canonically agreed upon to be played by actor Asa Butterfield.

You got all that now, sorta! But none of that homo shit tho. Be reasonable.
Geplaatst door Luca op 8:44 AM