A Case of the Not Gays: Hollywood's Subtle Othering 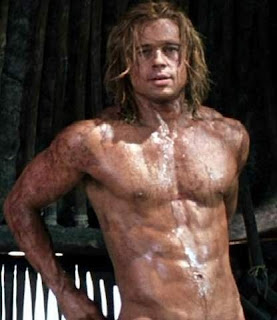 On a rainy Sunday afternoon, my partner, idly browsing Netflix, chose to rewatch TROY. It had been over a decade for her, and nearly as long for me. After a few minutes, I decided to stay put and follow along: the broad acting, telegraphing all emotions for the peanut gallery by (mostly) expert thesps proved too tempting a pide bread to lie uneaten.

Any Hollywood movie set in Ancient Greece (or featuring Greeks) always comes with a bit of a disclaimer: it would be a long shot to ask modern audiences to empathize with characters who engage in educational (!) pederasty, or to face the disconnect that the FOUNDERS OF DEMOCRACY were guys who locked their wives up in the house never to be allowed out.

It's not just the Greeks this happens to: any culture from the past sufficiently alien to ours will experience a moral adaptation. Consider the inspiring Aragorn speech Elizabeth Swann gave to an assembled army of pirates regarding FREEDOM in the third PIRATES OF THE CARIBBEAN film. Mel Gibson in THE PATRIOT and his salary-receivin' black employees. KINGDOM OF HEAVEN features a 12th century Christian proclaiming on his deathbed that he repented all his sins but one... his illegitimate son who is also the film's protagonist. My friends, I hope you also howl at the idea of a 12th century man saying "I don't regret all my sins" on his deathbed!

On the one hand, I understand. Hollywood blockbusters aren't history lessons, and people just show up to be entertained. Asking someone to experience a -- to our modern eyes -- morally abhorrent culture and empathize with its people is perhaps a mental exercise too great for a relaxing date night.

However, what shouldn't be too out there for a modern day movie is to reflect the diversity of modern day society. It's hard, it's hard, we know. You gotta sell your movie to the fly-over states, to Russia, to China, to India, ... not exactly the most progressive territories. So ya gotta play it safe!

One of the most insidiously abhorrent ways modern movies "play it safe" is establishing a Case of the Not Gays for its male leads. "A Case of the Not Gays" is a term coined by Red Letter Media in their video review of JJ Abrams' Star Trek reboot. In it, they claim the romance between Spock and Uhura is shoehorned into this new continuity so as to dispel any notions that the logical, soft-spoken, page-boy sportin' Spock could possibly be a homosexual. With Kirk, they simply showed him mackin' on a green lady et voilà. Bones? Introduced complaining about his ex-wife! Do not worry my Iowan/Russian/Chinese central government friends... no debauchery here...

JACK REACHER introduces its Reddit fedora hero waking up next to a thong lady. She is an unnamed character who does not appear in the movie further. Reacher is kind of an asexual throughout the rest of it, even refusing sex at some point. But don't worry, he's not, you know...

TROY has Achilles waking up covered in wenches, to reassure everyone that although he's one of them Old Greeks and we're going to lovingly film his semi-naked waxed and oiled torso. But don't worry...

Establishing a Case of the Not Gays is especially evil in my opinion, as it manages the double whammy of objectification of women to serve the purpose of gay erasure. This movie may not feature this character in any sex or romance but believe us buddy he is nothing but straight! Look! A hot chick he just banged that will have no further bearing on the plot!

DR. STRANGE did it masterfully, as all relationships with any story-weight the main character has, are with men. Whoops, better toss in a chick cuz this guy already sorta looks like Liberace!

Like all things patriarchal, Establishing Notgays doesn't just hurt women and queer people, it's bad for cishet young lads as well. By making absolutely sure that every male protagonist in every mainstream movie is not only straight, but also a ladies man, but also monogamous when it "counts" aka when they are with the female lead, perpetuating the bullshit myth that there are "good" women and disposable ones.

Rare is the case where a female character is introduced having sex with an unimportant male character to establish her seduction/libido bonafides (one that comes to mind is Anya Amasova in THE SPY WHO LOVED ME -- that's right, James Bond, of all franchises) without having her be demonized somehow.

The solution? As ever, more women and queer people in decisions of creative power, producing stories where such folk have agency in the plot. But ayyy y'all probably already knew that.

Establishing Notgays: not just funny, actively evil! Please keep this in mind next time you see a movie. Bring it up in conversation. Be obnoxious about it when someone jokes that you're "overanalyzing" things, or you're being politically correct.

Don't back down, my friends.

Email ThisBlogThis!Share to TwitterShare to FacebookShare to Pinterest
Labels: jack reacher, James Bond, LGBTQA, netflix, pirates of the caribbean, queer, the patriot, the spy who loved me, troy