Ursus aka Hercules aka Maciste aka Strong Guy: My First Brush with Peplum 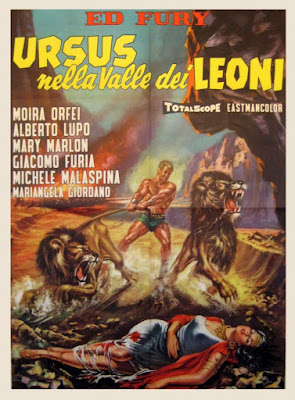 A few months ago, I happened to watch the biblical epic QUO VADIS for the first time. Nothing really jumped out as noteworthy from it, with me ultimately dismissing it as a well-crafted Hollywood blockbuster from an era where audience tastes (not to mention production methods) were quite different from today's. If anything stuck with me from my viewing experience, it was the odd experience of watching something that was meant to be an audience pleaser and a bit of awards bait simultaneously; AVENGERS meets THE KING'S SPEECH, if you will.

One of the elements meant to no doubt placate Sunday school kiddies dragged to a four hour movie was boxer Buddy Baer in a supporting role as the strongman Ursus, a well-oiled bearded barbarian who is... uncomfortable with the peaceful tenets of this Chris Channity. But by Woda-- uh, by Jesus, my lady, I will defend you from these cowardly skirt-wearing Romans! Intermittent rasslin' happens, cue another happy demographic.

Flash forward to a few weeks ago and, holidaying on Sicily, I catch the start of an old-timey epic on the tube. Fascinated by the sound of trumpets and the ever-so-charming use of an ancient tome opening as the movie's intro, I stuck with it. Imagine my surprise when it turned out this wasn't a Roman epic, or even a Medieval adventure -- this was that most shaky of cinematic propositions: a fantasy film.

Its name? URSUS NELLA VALLE DEI LEONI (or, "Ursus in the Valley of Lions").

The 1962 film recounts the origins of Ursus, a foundling raised by lions after the evil King Ajak killed his royal parents and took over the kingdom rightfully his.

Wait, what? Ursus is a KING? Of what country? When did the Romans invade, turn him into a slave and employ him as bodyguard to Deborah Kerr?

Licensing being a fickle thing in those days, and even moreso across continents, the character of Ursus kind of took off, and not exactly in a spin-off the way we understand the term nowadays, either. You see, Ursus in QUO VADIS was an inhabitant of the Roman Empire, and lived through Nero's burning of Rome and the mad emperor's suicide. There's not even a mention of Rome in LEONI. Why? Haha, welcome to Italian filmmaking, my friend!

After the success of the Steve Reeves starrer HERCULES in 1958, crafty Italian producers were on the lookout for any other strongmen from antiquity they could turn into low-risk hi-yield investments: soon the son of Zeus was joined in Italian theaters by biblical tough guys like Samson and Goliath; the alt-version of Hercules, Maciste (an Italicization of Makistios, a Greek sanctum that worshipped Hercules, and one of his pseudonyms); and finally Ursus. These cinematic comic books in antiquity are today known as the "swords 'n sandals" genre, or "peplum films" named after the simple tunics worn by many characters in them.

Ursus is the funniest of these guys to build a franchise around (9 movies!) because the deepest source material you can find for him is the Polish historical adventure novel QUO VADIS was based on. Was this big enough in terms of name recognition? I mean, even if you've never seen the Steve Reeves movie, odds are you know who Hercules is, and in a Catholic country like Italy Samson and Goliath were safe bets as well. Ursus, not so much -- many of his films were exported stateside with names like URSUS, SON OF HERCULES or sometimes even fully converting the character into Hercules when dubbing the feature into English.

But still, nine movies! For a character people were quite iffy on! Gotta admire that. Oh, those nine movies? All made in FOUR YEARS. But don't worry, they weren't straining themselves TOO much, there were about as many production companies and crews involved in this. It truly was a muscleman free-for-all in "Mad Men" times!

LEONI is about as good an introduction to the character you'll get anywhere, I'd say, since it's pretty much an origin story for our ursine-named strongman (how serendipitous he was first portrayed by a man named Baer). The writers of LEONI don't give a shit though, and regale us with the tale of how this beefcake was raised by... lions? Okay!

Ursus is portrayed here by American bodybuilder Ed Fury, in his second turn as the character, the first one being URSUS from 1960. Second turn from Fury, fourth Ursus film in two years overall -- you still following?

The young Ursus is shown cavorting with lions and uttering hearty laughs whenever one does something that amuses him, like rolling around or putting an "aww man" paw over its face. There's also a dog named Argo who cuddles with the lions in a surprisingly modern internet-savvy touch. You won't BELIEVE these two became friends... The main lion friend is called Simba, another amusing quirk for modern-day viewers.

Hilariously, whenever Ursus is on-screen with the lions, his face is never shown, so the close family bond we're supposed to buy is undercut somewhat because it's obviously a trainer (quite a bit less ripped than Ed Fury, even!) play-wrestling with the big cats.

The animals are, in fact, the star of the show here, since there is no real nudity or intense violence to speak of. The animals came courtesy of Circo Orfei, run by Moira Orfei, who also plays the ambitious slave girl Diar. Other animals her circus provided include hyenas who get hilariously mistreated as the handler twirls these obviously frightened barking beasts about and flings them into a dark hole, holding them by one front and one back leg (1:21:06 onward in the enclosed YouTube vid), and elephants who move about in the finale dragging the poor citizens over the hot coals until mighty Ursus beats them back and makes them lie down in a relaxed fashion while making straining noises as he pushes their sides (1:25:09).

Besides the obvious cheapness of the production and the simplistic mainstream 60s worldview presented, I have to say I had a fun enough time with LEONI. Certainly moreso than QUO VADIS -- oh, what an 80 minute runtime can accomplish! Would I delve deeper into this near-forgotten subgenre? Sure, okay, whatever!

For all y'all Italian exploitation lovers of the 70s: LEONI also features one of the earliest ever Riz Ortolani scores, the composer who would become world famous in the minds of creepazoids for his music for MONDO CANE, ADDIO ZIO TOM, ADDIO AFRICA and CANNIBAL HOLOCAUST.

A funny side-note: Italian unlicensed hucksterism continues well into the 21st century, even off-screen. While in Sicily, I saw many posters advertising the "Circo Sandra Orfei," an outfit capitalizing on Moira Orfei's name while being entirely unrelated to her.