Mist-borne figures emerge upon a rock strewn plateau. Drums resound across the eerie landscape. A column of soldiers carrying rifles and transporting a mortar edge quietly over this deathly still vista. Among them is a white clad gentleman, wholly out of step with the rest of his filthy, mud-stained entourage. A great and terrible deity carved from the ancient obsidian arises. The soldiers clutch their weapons with sweat-slick hands, muttering and praying.

Unlike his soldiers, Leon Rom (Christoph Waltz) is not afraid.

My ears perked up. OPAR, fabled city of Queen La, and location of countless Tarzan adventure stories. Would we finally be getting a Tarzan movie that went beyond a "Tarzan vs poachers" or "Tarzan and Jane are from two different worlds" plot?

A spear flies from the mists. Harmlessly, almost comically, it lands on the rocks between Rom and the military commander accompanying him, sending a clattering echo across the valley. The order to fire is given, and the men cut loose with a deadly barrage of bullets and cannonades into the fog.

It is here where our movie-trained brain would suggest that the soldiers walked into an ambush. Frightened men? A single, poorly executed attack from an unseen assailant? Indiscriminate firing into the void?

Director David Yates disagrees. He cuts to a bloodless field of dead Opar warriors in proper Christopher Nolan "never show any impacts" style. Oh, so it's actually the Oparians that are just as frightened of these outsiders as they are of them? Okay, shame about the distractingly bloodless and impact-free cut we made there, but fine.

War chief Mbonga (Djimon Hounsou) and his elite warriors had actually quietly amassed upon the edges of the cliffs surrounding the unfortunate Europeans, and proceed to utterly riddle everyone with spears and arrows. Only Rom manages to survive the onslaught, and slowly stands up from the two shields he'd been using as cover. The warriors have by now descended upon the plateau, and are surrounding him. One man is wearing Rom's hat. This is a joke maybe? He does not seem to be mocking Rom, and simply forms a part of the silent wall of humanity that imposingly stares the European down. It's a bit awkward, really.

Rom tells Mbonga he is here to trade. His king, Leopold II of Belgium, has run up innumerable debts building a railway infrastructure through the Congo, and is now all slaved up with nowhere to go. Rom has been sent to find out if the fabled city of Opar and its untold riches are a myth or cold, hard fact.

Mbonga says he will deliver all the diamonds Rom desires, if he delivers him one man. Who is this man?

What seems like fifteen awkward seconds of silence later, we cut to the title: THE LEGEND OF TARZAN.

Awkward. This is the word I can best use to describe Edgar Rice Burroughs' latest cinematic outing. I respect a lot of things that are there on paper, ideas that are well-conceived updates to the frankly insanely racist original material.

For one, Tarzan isn't really "king of the jungle" as much as he is "socially maladjusted cousin of the jungle." Skarsgard brings us a deeply conflicted Lord Clayton, living in London but suffering from a sort of "continental dysphoria." Although initially conflicted about returning to the Congo because he believes to be in his societally mandated place now, he nonetheless blossoms once he reaches the continent again, culminating in one of the few scenes that fully work: a random encounter with three lionesses he grew up with.

The apes, however, are a mixed bag. Tarzan is constantly getting his ass kicked by them in flashbacks and in the current timeline. Again, on paper that's pretty cool: which superpowerless human could beat a gorilla*? It keeps Tarzan part of a tapestry, rather than the white ruler standing above all the savagery. In practice, it combines with Yates' poor sense of build-up and scene flow to deliver a really soggy middle. In fact, once the third act kicks into gear, I had been so devoid of any emotional connection to what was happening on screen, I was actively surprised that we were so close to the end. Oh dear!

The addition of George Washington Williams (Samuel L. Jackson) and his (authentic!) exposing of King Leopold's enslavement of the Congolese into the narrative is another welcome one, keeping the horrors of colonialism at the forefront at all times. Jackson is pretty engaged here, making Waltz the slummin' thesp of choice.

Shame too, because (again in theory), Rom is a pretty interesting villain. Highly dismissive of superstition and apparently personally offended at Tarzan being a figure of legend (the title!), the entrepreneur confides to Jane (a totally wasted Margot Robbie doing the best with what little she has). Wait, I think he was supposed to be an OCD guy as well? None of these quirks and interesting little tics are fleshed out properly. In fact, my friends and I only put these possible character traits together when walking back home after the movie. "I guess they were trying to tell us this...?"

THE LEGEND OF TARZAN was the most frustrating cinematic experience for me since THE WINTER SOLDIER. Unlike TWS, where a competently shot movie couldn't hide the dreadfully dull script, TARZAN has a script with proper ideas and an obvious knowledge of and love of the lore that is completely botched by a director who seemingly couldn't wait to get back on the Harry Potter gravy train where he knew he could just point the camera at charming British actors saying "fluffaluppugamus!!" in dusty rooms and let the CGI guys fill in the blanks. Seriously, just switch up HP directors (Cuaron or even Newell) and this probably would have been a solid movie.

As it is, the most entertaining part of the film was the uncomfortable silences in my theater whenever the characters would lay into those evil dang Belgians. We've had it coming for centuries, buddy! I just wish a better movie called us out. 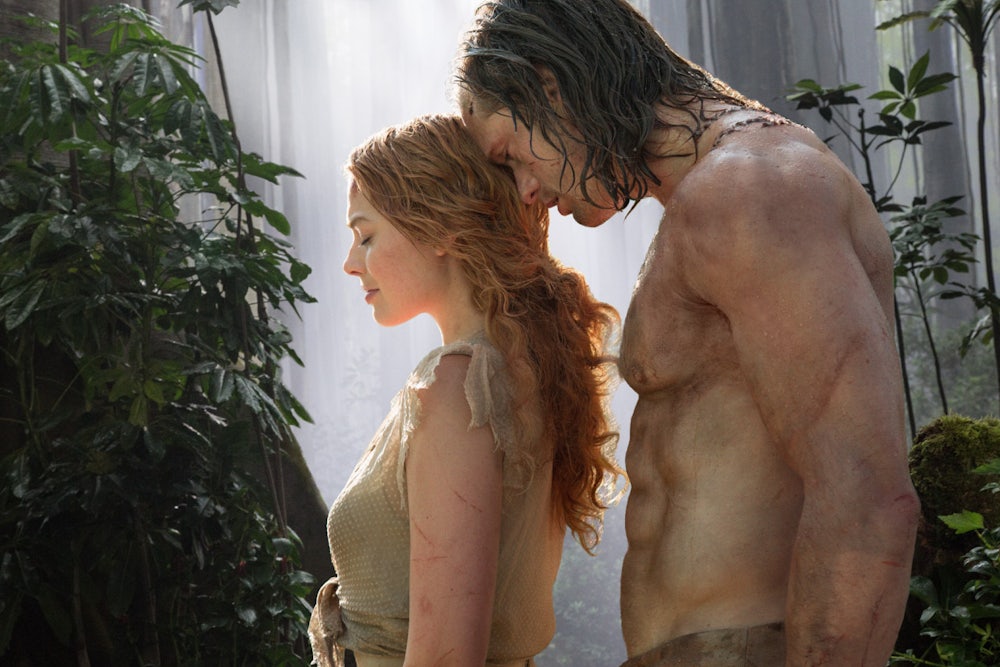 *Technically, a MANGANI, not a gorilla. Funnily enough, these "Great Apes" were the good guys that raised Tarzan in Burroughs' original books. Gorillas were bloodthirsty monsters akin to orcs who could be killed for laughs and profit without guilt. The film amusingly twists this lore by saying "No, they're Mangani. Gorillas are kind. Mangani are bastards."
Geplaatst door Luca op 8:27 AM

Email ThisBlogThis!Share to TwitterShare to FacebookShare to Pinterest
Labels: David Yates, I Live Near A Cinema, Tarzan, The Legend of Tarzan