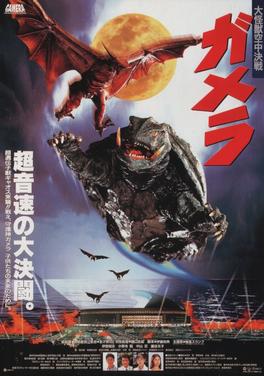 Ah, that dreadful moment when you step from a Showa kaiju series into a Heisei kaiju series and production values have gone up so substantially that you almost feel the need to drop the kaiju-reviewin’ kurve and judge these movies like you would any other. The Devil’s Envoy is back for a new generation, and he brought some of his classic foes with ‘im! Well, technically just one, but they are legion now! Allow us to explain, gentle reader… Like Godzilla’s darker, harder-edged Heisei reboot, GAMERA: GUARDIAN OF THE UNIVERSE starts with a ship in peril. A plutonium-carrying tanker crashes against an atoll. Drama abounds, as breathing one molecule of this shit is enough to cause cancer. But… nothing is spilled? A true mystery! The mystery gets even more mysterious when the atoll simply vanishes. A research team is sent to the moving rock formation as it approaches Japan, consisting of leader Naoya Kusanagi (Akira Onodera) and first mate of the ship from the opening scene Yoshinari Yonemori (Tsuyoshi Ihara). The island quickly seems to be more than meets the eye: littered with comma-shaped orichalcum amulets and strange etchings, the team comes to the conclusion that something is afoot here. Ya don’t think? While investigating a monolith engraved with Etrurian runes, something goes wrong. A quake – and the atoll takes off once more! The scientists are thrown off, but Yoshi sees a giant (not entirely un-JURASSIC PARK-like) eye… what could this be in this film called GAMERA: GUARDIAN OF THE UNIVERSE?

Meanwhile, in the other plot, ornithologist Mayumi Nagamine (Shinobu Nakayama) is summoned to a distant island where her mentor professor Hirata (nobody) seems to have vanished. The last thing he was able to say in a storm-disturbed phone call was “bird.” If you still have any doubt as to what’s happening here – ornithologist protagonist introduced, the fact that you’re watching a big monster movie, disappeared side character hinting at “bird” – the movie really makes it clear by having Mayumi find a big pile of bird shit containing professor Hirata’s glasses. What a delightfully crude and cruel way to show that we are indeed dealing with a giant, and – fairly rare for the kaiju eiga genre – man-eating bird. That’s right, Gyaos is back from the Showa era to combat our favorite jet-propelled turtle. If this makes you weary since Gyaos was one of the worst looking creatures of that time, fret not! The updated version actually kind of looks amazing, a dark copper-colored creature of malevolent instinct. Its big triangular head with the V-like plate covering its eyes now occasionally bobs up and down quickly as it chews on meat, giving the fantasy-version of a Pterosaur an almost Gremlin-like air of mischief. Heee hee hee we’re gonna eat ya and shit ya out! That’s wonderful!

That element of crude transgression no doubt came from director Shusuke Kaneko, a man Godzilla fans may already know from no doubt the best action and second best horror movie of that franchise, GODZILLA, MOTHRA, KING GHIDORAH: GIANT MONSTERS ALL-OUT ATTACK. His run of GAMERA films got him the job working on the original big G, and if this first Heisei Gamera is any indication, you can see why Toho approached him! The creatures’ physicality is at an all-time high, and the decision to make the Gyaos birds actually eat people (and, in one scene sure to distress animal lovers like myself, a poor chained-up dog) is a great one. Seeing the Gyaos chomp down on carcasses, pick off humans, shit them out (!), bleeding their own slime-like blood… well, this is an intense movie, as Kaneko is seemingly wont to make! Have you recovered yet, Travis? 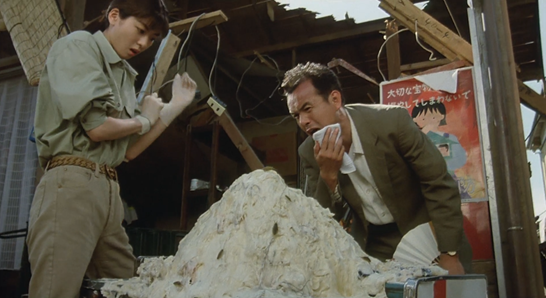 I'm more than recovered, Luca. In fact, this era of Gamera re-vitalizes my kaiju-lovin' spirit! I mentioned in the beginning of this series that I was no fan of him as a child and dismissed his Showa adventures as trifle compared to my beloved Godzilla flicks. It wasn't until my teen years that I could access more Japanese monster movies beyond what I could catch on TV, and the Heisei Gamera films were quite highly regarded among fan communities. With a little hesitation, I finally rented a copy of GUARDIAN OF THE UNIVERSE and was blown away. Though the big turtle is the hero of this trilogy, Kaneko truly is the star. The kinetic energy he brings is a breath of fresh air, and it's not just the action sequences that are livened up. The human scenes where people talk on and on about the monsters' origins and how to defeat them and yada yada are peppered with pull-in close ups, Dutch angles, and even sweeping pan shots. Okay, it doesn't sound that exciting, but when your typical kaiju flicks cut from boring medium shot to boring medium shot when showing folks in lab coats and military uniforms, a little movement is appreciated! It shows that Kaneko cares about the filler stuff and wants to give it enough energetic flow as we go between the monster action.

I would happily welcome him back to the monster wrestling world though! One thing I love about his kaiju stuff is the sense of history he gives to the monsters. They're not simply creatures that suddenly appear and wreck shit up, but they have ties to ancient history and civilizations. Just as Godzilla and company were old Japanese spirits of the past in GMK, Gamera's Heisei backstory ties itself to the lost island of Atlantis. In this narrative, the technologically advanced Atlanteans apparently created Gyaos through genetic engineering, but their creation ultimately lead to their extinction when it became too dangerous and wiped them all out. However, in a last ditch effort to protect future civilizations from Gyaos, they also created another hybrid animal to be the guardian of the universe... Gamera! Yep, instead of having these monsters fire laser beams and blast off with rocket boosters for no reason, we're told that the kaiju in this universe are the result of scientific tampering. Which is... kind of a neat idea! I like it because it's an amalgamation of fantastic elements (Atlantis) and plausible science (genetic modification of species). I think it also works because although we've known that Gamera has existed since Atlantean times in his 1965 debut film, there hasn't been a concrete origin for him. Illustrating the minor details we were given in the first GAMERA feature is a fun way of both revamping him while keeping him tied to his Showa past. Anything else strike you in this bold Heisei direction, Luca? 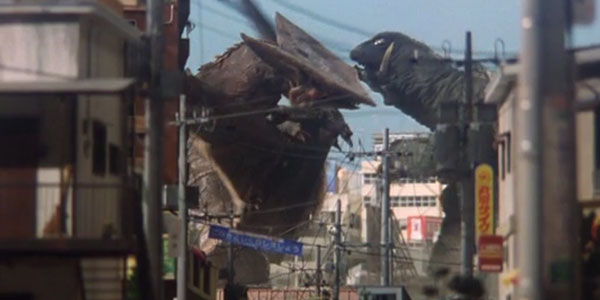 So in our little talk about a new era of Gamera with a new director in which I praise the newly acquired physicality of the monsters, and the grounding of them as real creatures by focusing on all manner of bodily fluids, you inform me that the new director used to do porno? Should I even waste time coming up with a joke here? In all seriousness though, that’s kind of fantastic. In this series and the Godzilla one, I’ve often compared kaiju eiga to both wrestling and porn. The fact that some of its most celebrated entries are from the mind of a man who in fact cut his teeth working on a genre that is basically defined by bodies in motion and interacting with each other should tell you something. While Kaneko’s iconoclastic treatment of some of Toho’s monsters in GMK left me with a slightly bad taste in my mouth (despite it being an excellent kaiju action movie), his extreme reimaginings of classic Showa creatures were essentially perfect. Oh, 60s Gyaos was a big troll? Let’s make him an extreme dog-killer and human-munching troll for our hardcore 90s version. Gamera was an Atlantean monster who was also a friend to all children? Well maybe he was an Atlantean creation that can be communicated with via magical rock! And mayhaps a teenage girl will get a hold of such a rock! It almost feels like what happened in the 80s with the British Invasion of American superhero comics, and the likes of Swamp Thing and Animal Man were not just re-imagined, but actually rebuilt starting from a fresh interpretation of their original concepts.

While those particular runs of the comics are known for their dark and gritty departures from their kid-friendly roots, GUARDIAN OF THE UNIVERSE doesn’t so much bring us a “dark” version of ol’ shellhead as a “more visually realistic” one. The gore and slime and physical viscerality of the action don’t really preclude kids from watching this movie, but I would definitely recommend that maybe kids 8 and up watch it, whereas the Showas are totally 6 and up. The shift in audience kid-identification character from boy scout and toddler-age moppets in the Showa movies to this movie’s assertive teen (and monster-controller) Asagi (Ayago Fujitani – the actual daughter of Steven Seagal) certainly indicates this. It’s a bit of a shame that she’s saddled with a run-of-the-mill “why is dad never home” motivation, but it seems par for the course in this more grounded new direction. I’m sure the wackiness in the human scenes will come forth as we proceed in the Heisei era, as it did with the Godzilla movies. I’m not contradicting you in Kaneko’s attempts at bringing some verve in the necessary human scenes, Travis, it’s just that Kazunori Ito’s screenplay brings things back to basics when it comes to these characters, which does not work exceedingly well when binge-watching these movies as we have. Of course, I also acknowledge that this should not really be a concern for any screenwriter ever. Unless you’re commissioned to do a Netflix/Amazon/Hulu show, I suppose!

Any final thoughts on this slimy new porno-take on the friend of all children (but not in that way), Travis? 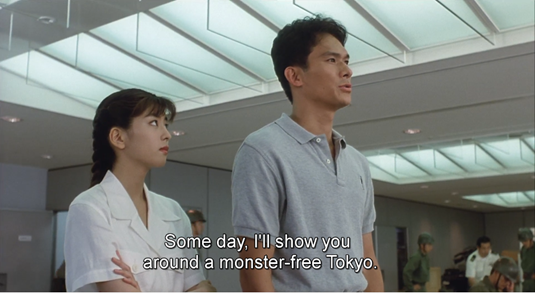 I think the character of Asagi epitomizes for me the strength of this movie. How long has Gamera been known as “the friend to all children”? Such a label is cute, but it has also been sort of a negative mark, indicating how blatantly kid-friendly the series is. In GUARDIAN, we never hear anyone say the famous moniker, and yet we still understand the strong connection between our monster hero and Asagi. It's this refreshment of cheesy clichés that works incredibly well for me. Of course, let's not forget that this movie's all about a big turtle fighting a big bird, but giving just a little maturation to the broad details of the Gamera series keeps the Heisei entries on a nice balance of grounded reality and kaiju whack-a-doo.

In fact, GUARDIAN won over famous critic Roger Ebert! He was never a fan of silly kaiju stuff, and a glance at his negative reviews for Godzilla movies (GOJIRA only got received one and a half stars!) showed that he had little patience for rubber creatures knocking over buildings. Yet in his printed review for GUARDIAN, he not only gave it three stars, but he also kept praising it over the Hollywood blockbuster AIR FORCE ONE (which had opened a month before GUARDIAN's limited US run in 1997). In his comparison, AIR FORCE ONE was another dour, realistic action film while GUARDIAN was just a fun, goofy time. He writes, “'Gamera' is not a good movie but it is a good moviegoing experience.” He even talks about the possibility that Gamera's rocket powers might actually be supplied by the turtle's own flatulence! Hey, sometimes it's nice to see the co-writer of BEYOND THE VALLEY OF THE DOLLS still recognize the trashy pleasures of cinema. Japanese audiences shared in that joy too, as GUARDIAN was a box office hit and signaled the triumphant return of our hero. The Gyaos might have been legion, but a threat from outer space was soon going to be more... uh, legion. And you'll see why in... well, GAMERA: ATTACK OF LEGION!