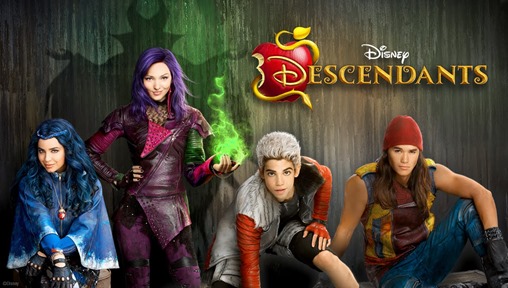 It is with some trepidation that I present my experiences with Disney’s DESCENDANTS under the banner of my barely existent LOLLEST COMMON DENOMINATOR series. The only other films to be covered as LCDs (hehh) were those of Paul W.S. Anderson’s seminal RESIDENT EVIL saga. Now, you can snigger and eye-roll all you want, but RESIDENT EVIL is a deeply personal auteur’s vision of a dadaist zombie apocalypse. Every one of them is written by the man himself – no committee-written, ever-cheaper cash-in sequels here! It’s just that… well, Paul W.S. Anderson’s vision often coincides with the tastes of ICP-lovin’ teenage multiplex goers.

DESCENDANTS, on the other hand, is definitely a good candidate for the title’s intended purpose. If you have not heard of it, do not worry! A Galadriel-esque voice-over will get you up to speed on this genre mélange within seconds!

Haha you see, this magical storybook is actually a I TABLET COMPUTER and the Galadriel voice? Forget about it! A snarky teen is at the mic!

Within the space of a few swipes and pinches, she has informed the audience that after Belle and the Beast got married, Beast united all the kingdoms of the land and was elected SUPERKING. The movie does not use the term superking. But all the villains, they were exiled to the dark island of lost souls or whatever.

Now, young prince Ben (son of Belle and Adam/Beast) is doing a thing where… I don’t think I fully understood this. He’s gonna be the new king because…? Neither Adam nor Belle seem to be in ill health. It also doesn’t seem to coincide with his high school graduation or any other milestone. This teen is just gonna be the new king, okay? I guess being elected superking means you can also do away with that stupid “electing superkings” rule. Ya walked right into that one, regular kings!

Before he is king, however, Ben gets to make one Royal Decree for reasons! I mean, I’m pretty sure the action-packed finale is set at his coronation*, so he’s definitely not king yet. Baby’s First Decree is as follows: the children of the exiled villains will be given the chance to attend Auradon High School because they should not be held accountable for the evil deeds of their parents. But is this such a good idea? Let us flash to Darkness Island and see what these kids are up to!

MISCHIEF, I say! Mischief so fucking bad that they declare themselves ROTTEN TO THE CORE in an introductory dance segment. What exactly they do, I’m not sure of. Jay, the son of Jafar, does some rowdy PARKOUR moves. Mal, the daughter of Maleficent, I vaguely remember tagging a shack’s wall? Anyway, they all dance to what my old ears sounded like a dubsteppy pop song that really cracked me up. I had no idea this was a musical and them just barging in with this SAINTS ROW music really had me slappin’ thighs!

Kristin Chenoweth is Maleficent, and she is a proper musical actress. She’s also the source of a couple of the intentional laughs of this movie and the one musical number that actually works unironically – although this particular form of vaudevillian musical theater she was doing is so camp that I don’t know if irony is ever really absent. In all honesty, I’m not really well-versed in musicals, so maybe this was a really bad and OBVIOUS and PANDERING song, but eh, worked for me!

Yeah, there are a couple of intentional laughs in the film, and even a couple of moments that I thought were kinda sweet (these mostly consist of Mal telling Evie – the ditzy daughter of the Evil Queen** from Snow White – that she’s a great person and her sister in spirit, if not blood). I can’t really fault it for not making me laugh, as this is a thing aimed at five year olds in the Midwest. I’ll give ‘em credit for at least doing that “Luca checks in on a network sitcom and the law of averages makes sure he sensibly chuckles a couple times” thing.

While I don’t feel entirely comfortable shitting on the jokesmithery of DESCENDANTS because it is so far from anything remotely aimed at me, I will gladly get on my soapbox about its lazy world-building. Fine, you’re throwing together an assembly of all the Disney characters and tell a tale of their children. Nothing inherently bad with this. But you’re really gonna do nothing more than put ‘em in a high school movie? And I’m talking about a fancy modern day prep school here – this isn’t Disney Channel Hogwarts. The kids are picked up in a regular ass limo, for fuck’s sake!

One of my favorite things in this movie were the “make sure the cheap seats get ‘em” references to Disney characters. A geeky poindexter guy in chemistry class introduces himself to Evie as “Doug… Dopey’s son”. First of all, who the hell did Dopey fuck to get a full human kid? Second, why would Evie be in any way more positively disposed towards him once she found out he was the son of one of the eight bastards who plotted her mom’s downfall? Third, dude, don’t go around telling people you’re Dopey’s kid.

A bit later, a girl called “Lonnie… Mulan’s daughter” introduces herself in Mal and Evie’s dorm room. Whoa whoa whoa, so Mulan also was real in this universe? Superking Adam must be fucking amazing to have a Tang dynasty emperor say “Whoa… guys, I dunno about you but I am quitting this game while I’m ahead. ALL HAIL SUPERKING ADAM”

Speaking of Hogwarts, there also seems to be a brokeass Quidditch approximation happening there. The rules are never explained and the matches take place in montages of under thirty seconds. Well, handsome boys are athletes, so we need a sport, right? But why even bother making up a fairy tale sport that you’re not gonna explain, and like 90% of this school is just a regular ass school anyway. It coulda been football just as easily!

I’m not even inherently opposed to taking famous characters and turning them into kids/teens for a high school romance, but I think what is necessary here is that the characters you’re teenifying have a modicum of gravitas to them. Disney Princesses, and by extension their villains, have already been so commodified into smiling, friendly lunch box covers that there’s nothing to subvert here. Yes, I am basically arguing that WATCHMEN BABIES: V FOR VACATION would have been a better idea than this. Why would a ten year old girl tune in for DESCENDANTS? She could just as easily watch, well, ALADDIN or BEAUTY AND THE BEAST. But hey, gotta keep dat content mill churning.

I’ve never been to a Disney theme park or ever really watched Disney Channel, but I was most struck by how relentlessly artificial everything was. For decades, filmed fantasy fiction has traded in the “used universe” aesthetic, where everything is supposed to look lived in, for a greater and easier sense of immersion on the viewer’s behalf. This is not absolutely necessary, of course, since a heightened world can be equally effective in delivering either visual thrills or bringing a satirical bent to the proceedings.

Unfortunately, DESCENDANTS doesn’t look particularly interesting, nor does it have anything especially biting to say. The heights of its imagination are fancy prep schools, limos, sort-of Catholic looking cathedrals with all the religious imagery scrubbed out and… slums? Yes, the evil villains live on an island that literally just looks like a poor neighborhood. And it’s not just the four evil parents that live there, there seems to be a thriving community with babies and all (Mal steals candy from one in the opening number). Keep in mind that the four villain kids are invited to attend high school as a special mercy from the prince. What does that mean for the other kids on the island?

Damn, Superking… you cold as fuck.

This won’t have you rolling as much as it did me since you now know it’s a musical, but enjoy anyway!

*Did not nap during this film, nor did I partake in any mind-altering substances.

**Evil Queen only ever referred to as Evil Queen.