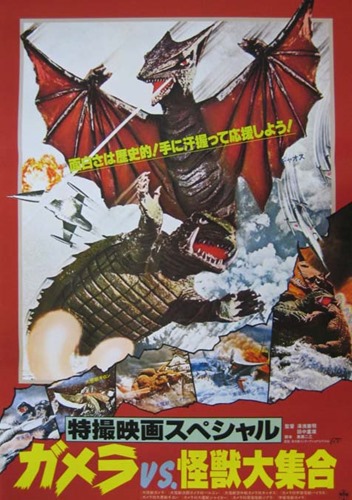 By virtue of not having access to any licenses to the most famous monsters of (American) filmland, Gamera’s career in monster rasslin took a slight detour from the standard Godzilla trajectory. After a black and white solo debut and a first match against a quadruped reptile, GAMERA VS. GYAOS takes us straight to the match against a flying monster, foregoing a clash of icons such as KING KONG VS. GODZILLA. Gyaos is no kind and gentle Earth guardian like Mothra, though. He’s not even a rowdy jock like Rodan, even though his design is obviously lifted from the (by that time) decade-old Toho pterodactyl. Gyaos is, for want of a better expression, a big fuckin’ asshole. Now, the meanness in this film doesn’t actually exceed what we saw in BARUGON, but there’s definitely some added weirdness to go along with the cruelty. But let us start at the beginning, friends…

GAMERA VS. GYAOS starts as many a kaiju movie does, with news reports about increased seismological and volcanic activities around the country. What could be the cause and/or result of these? Surely a look at the film’s title and/or poster could not tip us off here! Against the backdrop of this threat of ecological disaster, we meet our little protagonist Eichii Kanemaru (Naoyuki Abe), grandson of village elder Tatsuemon Kanemaru (Kichijiro Ueda), as he lives an idyllic life at the foot of Mt. Fuji. That idyll is disturbed, however, as the dastardly (or is it…?) Express Engineering Corp plans to build a highway through the forest, and wants to buy out all the villagers’ land. Grandfather Tatsuemon is the main spokesperson for the rights of the civilians, and tries to come to a beneficial solution for both parties. However, things take a turn for the bizarre when a laser beam slices a UN survey helicopter clean in half and causes at least one old man surveyor to fall to his death in a hilarious fashion. What could the source of this danger be? What is the mysterious green light emanating from the cave that the laser originated from? Newshound Okabe (Shin Minatsu) convinces lil’ Eichii to be his guide into the mountain. What they uncover might spell stiff-necked doom for all of Japan!

This is all extremely textbook stuff for your average kaiju movie, and as such it took a while for it to really capture my attention. The bisected helicopter with subsequent casualty was my first laugh-out-loud moment, and Okabe and Eichii’s ill-fated expedition into Mt. Fuji was probably the second time it managed to muster some interest. Now, I don’t want to undersell the movie, as it does wind up doing some crazy and entertaining stuff, but I’d hate to cover all the fun stuff before you can have a go, Travis. I’ll instead take the less fun route and enumerate the two biggest failings of the movie: the bland set-up I’ve already gone over. This stuff is what sank the original RODAN! Second, and one might say quite fatal for a movie whose entire purpose rests on it: Gyaos frankly looks like shit. He’s stiff as hell, his eyes are too big and motionless, and his teeth are the purest ivory, indicative of a rushed paint job. Rather amusingly, there’s actually an in-universe explanation given for why Gyaos can’t move his head sideways. You see he has two throats, in order to… create… the laserbeam? And they can’t… touch? Aw hell, Travis, what did you think of the third Gamera film?

Yeah, I'll admit too that Gyaos looks pretty cheap. Luca, the description you gave of motionless eyes and a rushed paint job sums up the look of most of the Gamera kaiju. Though we're already dealing with sci-fi monsters, this aesthetic gives the creatures a more cartoony appearance than the ruff & tumble stars of the Godzilla series. Whether you find this as more cheesy goodness or proof of Daiei's shoddiness is up to you. While Gyaos' believability certainly won't fool anyone, he is an interesting kaiju among his peers. I like that his beam acts more as a cutting torch than a standard laser that simply makes things go kablooey. Giving him a vampiric personality with his hunger for blood and vulnerability to sunlight also make him quite unique among Gamera's rogue gallery. In fact, Gyaos would end up as the only recurring opponent in the entire franchise. He racked up two more Showa appearances before becoming the primary antagonist of the Heisei trilogy, and he'd also square off against the big turtle in the opening scene of the Millennium era GAMERA: THE BRAVE. Good on ya, ya tight-necked bloodsucker!

Count Gyaos-cula is also responsible for my favorite guffaw inducing scene of the movie. The military eventually devises a plan to lure the monster out of his cave with gaseous clouds of synthetic blood just before dawn so that the sunrise may destroy him. But how will they keep Gyaos from flying away as soon he sees the sun? Why, by placing the plasma geyser on top of a rotating platform that will spin so fast that he'll become too dizzy and delirious to escape! If you thought the humans' plan to trap Gamera in a rocket and blast him off to Mars in the first film was ridiculous, this one certainly tops it! And so we're treated to a fun two minute sequence of Gyaos keeping high off of blood fumes while he twirls around and around and around and around and around... Basically, if you're looking to find kaiju clips to turn into LOL-worthy GIF files, you've struck gold.

But enough about our monster villain! What about our human villains? In these kaiju flicks, it's typical to paint land developers and businessmen as fools who don't respect the sacred territories and myths of the native people. GYAOS however turns this on its head in a fun way. While the villagers are protesting the construction of the new road, it's not because they care about their homes or the preservation of their history. They're simply being difficult until Express Engineering gives them a high enough price for their land so that they can become rich. What cads! To even further the role reversal, Express Engineering dedicates much of their manpower and time to aid the military in defeating Gyaos while the villagers continue to squabble and argue about their greed. Of course, it also helps that Express has the dashing, heroically handsome Shiro (Kojiro Hongo) as the foreman to lead the attacks on Gyaos. A true nobleman for urbanization, he is! What did you think about this twist, Luca?

I think GAMERA VS. GYAOS must be one of the most morally offensive children’s movies ever made if you have a single environmentalist or leftie bone in your body. Not only do the poor townsfolk mean to milk that gentle billion dollar corporation for all it’s worth – shades of the Simpsons episode “Radioactive Man” where Mickey Rooney scolds the Springfieldians for taking advantage of those kind, naïve Hollywood souls who just wanted to tell a story about a man… a radioactive man. Only in GAMERA VS. GYAOS, there’s no joke! The villagers really are slick hustlers who hold a billion yen enterprise by the balls for personal gain. Not only are the company men hailed as heroic, square-jawed heroes as opposed to the sniveling small-town hucksters, the plans to defeat our winged villain monster range from merely burning down a forest to spraying it with blood. Adding insult to injury doesn’t cover it: that’s some Aslan-shaving shit right there!

Thing is, I honestly have no idea if screenwriter Nisan Takahashi was consciously trying to make “civic minded” children’s entertainment, or if it was just a product of living through years of a post-war reconstructionist Japan where progress, progress, progress was the highest good. If you compare this movie to Toho’s ALL MONSTERS ATTACK, another monster flick specifically aimed at children released around roughly the same time, it’s quite jarring to see that in AMA unchecked industrialization is kind of a background evil, a dehumanizing, distancing force. In GAMERA VS. GYAOS, Express Engineering Corp is pretty much the Justice League! If nothing else, it really makes me appreciate Ishiro Honda’s anthropocentrism, even if it’s buried under layers and layers of re-used footage and shrill children’s songs.

Now, don’t get me wrong. The fact that GAMERA VS. GYAOS (unintentionally?) espouses some politics that I am super not-down with doesn’t mean it’s not a good time. It totally is! In fact, it’s a pretty solid entry for Showa monster movie watching, with a couple of real outlandish gags, a cute kid protag and a short runtime. I won’t even say the movie is fun “despite” its horrible ideology – I’d even say it’s an added bonus. Nothing surer to strike up a conversation with friends than a movie just starting to say/do evil shit like it’s normal, I say! It’s actually interesting that this kind of filmmaking has returned with the rise of China as a global economic power (and movie market). The best recent example would be TRANSFORMERS: AGE OF EXTINCTION, where the movie inexplicably moves to China for two hours, and the Chinese government is an expert at killing Decepticons, evacuating civilians and saving American asses and being all around good guy badasses. Hey, at least they didn’t have to burn down forests to beat the bad guy!

Oh man, I love that the movie's so pro-business that burning down the entire forest will not only help defeat Gyaos but also give those petty villagers their due comeuppance! Even elder Tatsuemon justifies the action by saying that Gyaos is punishment from their ancient ancestors for their present day greed and that only destroying their land will cleanse them from sin. Remember, kids, don't allow your selfish needs to block the way of progress lest a vampire monster force you to lose your possessions!

Speaking of kids, while Gamera's soft spot for youngsters has occasionally crept up in these first few movies, it's in GYAOS that we see the turtle fully settle in as the friend to all children. Not only do we see him selflessly protect lil’ Eiichi from being gobbled up by Gyaos, but he also flies the child to safety and drops him off at a Ferris wheel to be picked up by rescuers. Wow! Imagine being a kid getting a trip on Gamera's back and having your flight end at an amusement park. What a great day! It helps that Eiichi himself is a charming young lad, a little guy who adores Gamera while luckily not reaching the heights of psychotic idolatry that Toshio from the first GAMERA portrayed. He adores the big turtle while not becoming annoyingly precocious. It's also very amusing to see the military consult Eiichi a couple of times on strategies for defeating Gyaos since the boy's a fan of kaiju and studies their habits for most of his time. This must be the ultimate wish fulfillment fantasy for geeks: having the government rely on you and your expert knowledge on your nerdy obsession to save the world.