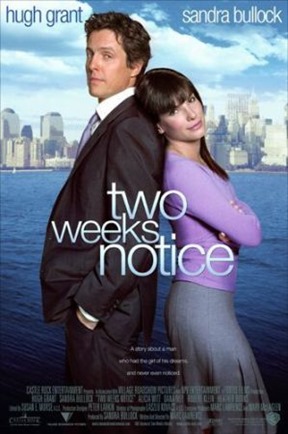 There is no better way to encapsulate the experience of watching TWO WEEKS NOTICE than to describe its addition to that most hallowed wing of the romcom pantheon, the mad-dash-for-the-lover-you-almost-lost at the end of the film. Billionaire playboy George Wade (Hugh Grant, playing a character I really wish was called Bruce) has just declared his love to his former attorney Lucy Kelson (Sandra Bullock) in the guise of practicing a speech. The disillusioned, fed-up Lucy brushes him off with a muttered “I have work to do”, and George, heart-broken, shuffles off. He isn’t out the door for a minute when Lucy sits down next to two colleagues and asks, “That was actually a pretty perfect speech, wasn’t it?” One of the co-workers (fat, black) responds with “Yup. Hell, I hate the guy and I’m wondering what you’re still doing here!” This of course prompts Lucy to storm out of the office and engage in that age-old ritual of overcoming sudden physical obstructions and a ticking clock to profess her love to the one and only Co-Lead And Thus Perfect Partner Forever.

Only… she kinda bumps into two guys who are moving stuff for a second and then meets up with George about 20 yards down the street. WHATTA CLIMAX! Time for credits!

This low-energy hijinks is not just the movie’s ending fizzling out, it’s the diligent application of an “ehhhh” style of filmmaking prevalent through the entirety of TWO WEEKS TO NOTICE. Grant and Bullock are fine actors, and actually manage to be funny a handful of times, but neither the script nor the direction aid them in any way.

Sandra waltzes into Hugh’s office demanding more appreciation? “R-E-S-P-E-C-T! Find out what it means to me!”

Hugh takes Sandra on an impromptu helicopter ride? “Fly me to the mooooonnnn…”

The two weeks’ notice of the title happens in the middle of the second act, as Sandra decides she’s done with Hugh’s overly needy employer and manages to convince him to search for a replacement during these two weeks.

Now, the movie didn’t actually start out with Sandra as Hugh’s beleagured lawyer/nanny. She’s introduced as an idealistic “shackle yourself to bulldozers” activist who gets hired by Hugh as she’s that rare type… someone who dares to talk back to me… in a classic moment of Hollywood fairy tale bullshit. But that’s fine! That’s why we go to the movies.

Over the course of a montage of months we see Sandra become increasingly exasperated with BIG BABY Hugh’s delirious demands. The final straw? Getting a text about an “emergency” as she stands a bridesmaid at the altar of a friend’s wedding. She of course rushes out of the church in a tight pink dress, getting comments from construction workers and taxi drivers alike, until she finally meets Hugh only to find that… he wants her advice on which jacket and pants to combine. When she angrily says she was at her best friend’s wedding (haha), Hugh seems nonplussed and just says “Well you didn’t have to rush out immediately!”

This is the worst that happens to a social justice activist whose job perks include “giving millions and millions to your favorite charities”. What hell! What torment!

When they’ve found a suitable replacement for Sandra (the aforementioned big black lady in her first appearance of the movie), the scene starts at the end of her interview with everything seemingly in the bag. But OH! Hugh screws up by asking “Oh, and when’s the baby due?” This PROUD black woman don’t need to take any guff like that, so of course she storms out.

This six figure paycheck vacancy with a super undemanding boss is having some serious trouble getting filled! You know a movie is set in coo coo bananas land when a woman of color with a conventionally unpopular body shape leaves a job like that over one ignorant comment.

The position is ultimately filled by a certain June Carver (Alicia Witt) who immediately starts flirting with Hugh and is sort of the TOTAL BITCH antagonist. Only… she’s not? It’s unprofessional that she starts flirting with her boss, true, but Hugh and Sandra do not have a relationship. In fact, Sandra desperately wants to get AWAY from this capitalist monster when the two women first meet. She’s not angling for her job either, since she’s a perfectly legitimate candidate that was chosen to replace Sandra.

If I can give the movie any credit, I suppose I can say that Sandra’s character doesn’t have a man-shaped hole in her life at the beginning of the movie. In fact, she has an off-screen boyfriend who is even more politically active than she is. Obviously, this relationship goes south so she can hook up with Hugh, etc, but at least they attempted to make her character have other longings than romantic ones.

The movie also appears to be actually shot in NY, which was probably a huge boost in late 2001/early 2002 when this was being filmed. Good on you, Sandra (I’m assuming this was all Sandra and otherwise it woulda shot in Toronto or something).

Oh, and Hugh’s character’s brother Howard (played by that awful wax museum owner from Penny Dreadful’s second season) tells Hugh “I don’t know if you’ve noticed but the economy isn’t what it once was!” Later, at a party, Donald Trump threatens to steal Alicia Witt from Hugh. HA HA 2002

TWO WEEKS NOTICE is a movie that aims for the middle and easily reaches it, only to find that the middle is a vast grey expanse of nothingness, with at its noisome heart a dilapidated community center hosting senior citizen synchronized swimming courses for none.