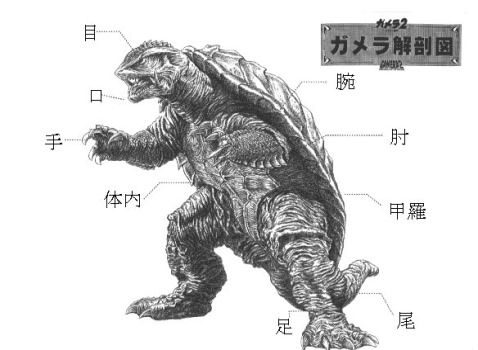 It was late 2013 when the inimitable Travis Kirkland and myself set off on a path of destruction through half a century of pop culture that started with a certain grim little monster movie from 1954 called GOJIRA. Over the better part of a year, we discussed every movie featuring the titular monster – and some ancillary crap besides (such as the short-lived 1999 animated series and the only album ever that featured both Diddy and Jakob Dylan). If you enjoyed our Kaiju Kavalcade blog series – or even bought the collection “Memories from Monster Island” off Amazon – we hope that our latest endeavor will bring you as much fun. You see, TURTLE TALK will delve into that other great purveyor of city-smashing: the friend to all children – GAMERA himself! Now, our angle on the Godzilla series was that I was the noob going in cold, whereas Travis was the old pro, coming to the movies from a place of rediscovery, ready to face the cold light of an atomic dawn if they didn’t quite hold up. For TURTLE TALK, this contrast has been sanded off a bit, as Travis isn’t quite so well-versed in Gamera lore as he is in Godzilla. Equals, finally? Almost! But I will let him elaborate a bit in a second.

What is my relationship to Gamera? Well, it’s fairly minimal. Even more minimal than my knowledge of Godzilla was when we started with Kaiju Kavalcade, in fact! From my general pop culture osmosis, I had gathered over the years that Gamera was

After the life-transforming/affirming experience that was compiling Memories from Monster Island, I can add another fact to this very short list: he never met Godzilla in any official capacity. With the thoroughness we applied to our Zilla-journey, it would be inconceivable we could have missed such a clash of titans. And isn’t that weird, if you think about it? Even eternal rivals DC and Marvel Comics set their differences aside to produce stuff like Amalgam Comics or that fan favorite one where the Joker teams up with Carnage. But Godzilla and Gamera? No dice! For fifty years, the two iconic monsters stayed completely separate. Just strict business practices, or an irreconcilable stylistic difference in tone and target audience? We hope TURTLE TALK may shed some light on this issue that is no doubt keeping the lot of you awake at night. Travis?

Here's a shocking revelation from this lifelong kaiju fan: I hated Gamera.

Yep, this dye-in-the-wool fanatic of giant creatures crushing buildings was definitely not a friend to the big turtle during my formative years. Godzilla, Rodan, Anguirus... all of the Toho monsters became beloved characters to me as I grew up. And yet... Gamera could not impress me at all, no matter how many gravity-defying somersaults he could pull off. This... this fraud... this hack... this RC Cola of a reptile compared to the classic Coke formula of Godzilla. Looking back, it's very odd to me how much I actively rejected Gamera. Sure, he was created by Daiei Film Company as competition for Toho's main G, but I was perfectly happy embracing dueling icons of pop culture. Mickey Mouse and Bugs Bunny, Super Mario and Sonic the Hedgehog, Superman and Spider-Man... they all had a welcome place in my fantasy world. But Gamera... if I had my way, I would've left his ass frozen in the Arctic while I enjoyed watching more reputable kaiju like Varan the Unbelievable.

But why? Why was I so prejudiced against the poor monster? Perhaps I wasn't introduced to Gamera in the right context. Instead of a magical late night marathon that transformed me into a Godzilla fan, my first glimpse of Gamera was via the television show MYSTERY SCIENCE THEATER 3000. Five of his movies were roasted by Joel Robinson and his robot pals during the third season, and I happily laughed along as they ripped apart the films' goofy, innocent tone. Stupid turtle. In all fairness though, MST3K also riffed on GODZILLA VS. MEGALON and GODZILLA VS. THE SEA MONSTER, so the big man of Monster Island wasn't safe either. My blind hatred was also probably due to it being my first brush with geek brand loyalty. How could any monster dare stand up to the rightful popularity of Godzilla?! Heck, if you recall our review of KING KONG VS. GODZILLA, I wrote about how outraged I was as a child to see some dumb ol' ape be victorious over my King of the Monsters. An outrage I say!

Many years passed however, and my unwavering allegiance to Godzilla became more relaxed. I eventually came around to watch a few Gamera Showa era movies and was amused the monster's antics. They didn't make me a convert, but I could now see his appeal. He's a flying, fire-breathing turtle who has a soft spot for protecting children. Of course kids would love him! Later on based on strong recommendations, I also checked out the incredibly awesome Gamera Heisei trilogy, headed up by director Shusuke Kaneko (who brought that same kinetic energy to GODZILLA, MOTHRA & KING GHIDORAH: GIANT MONSTERS ALL-OUT ATTACK). So where does that leave me before I dive headfirst into the entire Gamera filmography? For me, MEMORIES FROM MONSTER ISLAND was my way of reconnecting with my childhood friend Godzilla to examine our long relationship and how it remains strong to this day. In this sense, TURTLE TALK will be me trying to make peace with an old acquaintance I've unfairly treated all these years. And Gamera, I wouldn't mind calling you my friend at the end of this. So sit tight, readers, because next week we're kicking off our coverage by blasting back to 1955 with (what else?) GAMERA!