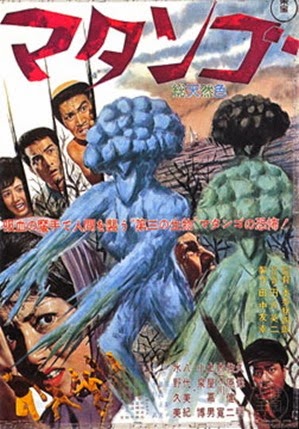 For a movie called ATTACK OF THE MUSHROOM PEOPLE stateside, MATANGO doesn’t feature a whole lot of said fungal persons on the attack. And it’s all the better for it! But let’s take it back a bit and talk about what this movie IS about. After GOJIRA’s Lovecraftian, unstoppable, unknowable beast from the depths, MATANGO provides us with that other classic trope of weird fiction: the doomed narrator who will recount to the reader/viewer their story from the bowels of a hellish institution for the mentally unstable. A fun way to break the tokusatsu mold, and who better to usher us into this bleak tale of humanity lost than Akira Kubo, that Toho stalwart Godzilla fans know from INVASTION OF ASTRO-MONSTER, SON OF GODZILLA and DESTROY ALL MONSTERS. Kubo plays university professor Kenji Murai who, along with six others, undertook a doomed pleasure cruise deep into the Pacific. Murai’s ominous narration is actually quite intriguing, as it doesn’t promise viewers the tale of how EVERYONE DIED, but rather tells us that “they are all alive… and I am the one who is dead.” Okay, I’m down for this!

In a hilarious bit of classic Toho tonal shifting, this portentous statement is followed up by swingin’ 1963 big band music as we flash back to the ill-fated voyage. On board are other Toho mainstays Kumi Mizuno as Mami, famous actress, Hiroshi Koizumi as the skipper Naoyuki, Kenji Sahara as the first mate Senzo and Yoshio Tsuchiya as Kasai, the industrialist owner of the ship. Rounding out the maritime miscreants are novelist Yoshida and student Akiko. There’s a lot of faux-jolliness in the initial scenes, as it’s quite clear quite quickly that some of these people can’t really stand each other. A storm strands this ragtag crew of (mostly) 1%ers on an abandoned island, strangely bereft of all animal life and even edible plants. Tensions rise as the skipper warns everyone not to eat the ubiquitous fungi, as they may be poisonous. After some exploring, the group comes upon another stranded ship, overcome with rot and mold. Amazingly enough, this seemingly ancient vessel has only been here for a year, according to a recovered log book. With relations being strained ever thinner due to lack of food and no way to communicate with the mainland, along with the strange lure of the mushrooms, the group finds itself under great duress. But what will happen to them?

Well, Travis, I must say I rather enjoyed MATANGO as a hell of a detour from our usual Toho kid stuff! MATANGO is bleak. True, we weren’t very far from GOJIRA, which was no walk in a sun-drenched park, but we were also post-KING KONG VS GODZILLA, the definitive veering into comedy adventure. What I’m trying to say is, it’s refreshing to see director Ishiro Honda get to make a genre movie for adults again, and I have the feeling he must have enjoyed the experience as well. No Akira Ifukube this time, but music duties are most ably and atmospherically handled by Sadao Bekku, a fellow whose work I’ve not had the pleasure of hearing before this. What did you think of this tense island thriller, Travis?

This is truly great filmmaking here, Luca. MATANGO is not only one of Toho's best tokusatsu movies, but it's also one of Honda's finest films. Though his career would be caught up and defined by the Godzilla machine, I suspect that MATANGO and GOJIRA were prime examples of the type of science fiction he was most invested in: human drama at the forefront while the supernatural threat looms ominously in the background. For G fans, MATANGO's also a great discovery to see Honda and some familiar Toho cast talent put on a tense, psychological thriller instead of the usual rompy kaiju fests. It reminds me of Joss Whedon's adaptation of MUCH ADO ABOUT NOTHING, which is certainly a break from his action flicks yet retains many Whedon players like Amy Acker, Nathan Fillion, and Clark Gregg.

To go back to the MATANGO/GOJIRA comparison, a sense of fatalism permeates both films and each one ends on a bittersweet note. In GOJIRA, Godzilla is finally obliterated by the Oxygen Destroyer, yet Takashi Shimura's character still bemoans that the monster could arise again if mankind continues to tamper with nuclear weaponry. It's only a small victory in the fast growing atomic age. Similarly in MATANGO (SPOILER ALERT!), despite Kubo keeping a level head and resisting the temptations of the mushrooms during the entire ordeal, he reaches the mainland as the sole survivor with the fungus infecting his face. Was the struggle worth it if the disease was inevitable? MATANGO's even darker as a streak of nihilism runs through the film with the survivors constantly at each others' throats. Issues of class warfare and sex between the members of the shipwrecked crew drive most of the drama in the movie even before the mushrooms become a legitimate threat. Though Kubo is rescued at the end, he wonders if coming back to so-called civilized society is any better. “They're becoming inhuman,” he muses as he gestures to the Tokyo cityscape.

The fighting amongst the group drives so much of the story that the appearance of the mushroom people almost feels like a secondary threat. And yet in spite of the goofiness of kaiju performers in fungal makeup or over-sized toadstool costumes terrorizing people, the tension and reality of the situation never feels broken when such an odd, cosmic entity infiltrates the plot. It's to Honda's credit that he first establishes the survivors' predicament in such a serious, dire fashion that any silly Showa tropes would feel improper. Secondly, as the groups slowly descends into their own isolated madness, the walking Matango are introduced and shot in a very hallucinogenic way with a warped out soundtrack filled with child-like laughter. Ivan Reitman once explained that why GHOSTBUSTERS ultimately worked was because he started the characters in a familiar setting (the schlubs thrown out by the academic snobs) then slowly used it introduce very fantastic elements until the film climaxed with a monolithic marshmallow man. In the case of MATANGO, Honda used the old potboiler of stranded survivors to tell a monster tale, ratcheting up the human drama until the monstrous horror is unveiled. It's refreshing to find a kaiju flick that builds towards the kaiju scenes in a disturbing manner rather than ticking down the clock till the wrestling match set piece. Did you find anything else striking in MATANGO, Luca?

I'm of two minds towards the mushroom people themselves, because I honestly think they look kinda gross, and the children's laughter and psychedelic sound effects do a superb job of creating an atmosphere of madness. The muted, earthy colors Honda uses for the island (no surreal splotches of color to indicate the radioactive life form) stand in stark contrast to the swingin' sixties garb the human cast is attired in, making them look like little islands in an unending sea of decay, almost pathetically attempting to stand out and affirm their individuality. Such decadence is not good for anything, as the film's final thesis statements lets us know! "Perhaps they are alive and I am dead" indeed...

Here's the problem with the mushroom people, however! The fungus is supposed to be alluring because of the castaway's hunger (and maybe on a more supercerebral level as well). The horror is in the loss of self, and the discovery of what happened with the crew of the research vessel that was stranded here before our jolly 1%ers . When we finally see the mushroom people, the shit should basically be pretty much lost for everyone: this is your new reality, the movie should be saying at this point. It's a real short story ending. MATANGO is, in fact, based on William Hope Hodgson's "The Voice in the Night", making it one of the few movies we've covered (along with the original MOTHRA) to be based on outside material. Being a 1960s monster movie, however, we need some physical threat -- lumbering monsters in dark hallways, people in physical peril. Credit to Honda for keeping the mushroom people MOSTLY out of frame and in the distance for a majority of the movie, but there are some key moments where I was more confused than unsettled because of this necessity of the times. I think there's at least two moments where people are cornered by a (admittedly well built-up and shot) mushroom man but... don't seem to suffer any consequences? They just scream and we cut to other survivors, but later they're okay? Was there something I missed here, Travis? Maybe the mushroom men dissolved into spores to be breathed by their new victims/hosts to spread the infection, but the budget/technology wouldn't allow for such intricate visuals?

Despite my sluggish human brain's incapacity to process complex mushroom motivations, I was a big fan of this movie as well, Travis! It has even slightly nudged me to check out some Hodgson short stories. It also makes me kinda sad Honda wasn't allowed to branch out a bit more -- I'm sure Fukuda would have gladly picked up some slack! It's funny how a completely bleak movie becomes a breath of fresh air after many, many jolly ones. And with Toho returning to Zilla soon (2016), why not give other types of movies a shot? Can you imagine the internet hype machine for something like TOHO STUDIOS PRESENTS THE CALL OF CTHULHU?

Oh man, a Toho take on some proper Lovecraft sounds tantalizing! Since we've tied Godzilla to the Old Ones earlier, we could also connect the mysterious Matango to the amphibious creatures known as the Deep Ones from H.P.'s famous short story “The Shadow over Innsmouth”. Both are species of upright walking monstrosities from the sea that promise eternal life through assimilation (though for the Deep Ones it's through mating and reproducing with humans instead of consumption for the Matango). Quite a scary prospect, Luca, but I also understand the confusion you had over the nature of the mushroom people. I think having them suddenly disappear into thin air during their attacks on the ship is supposed to make the audience question the sanity of the group. Is there an actual threat or are they just hallucinating? It kinda works until we finally see for sure that, yes, the Matango are truly strutting around the island. Then it just makes those past incidents even more confusing! It's a substantial criticism, but it's only a small smear on an otherwise fine film.

And MATANGO truly is a fine film and a testament to the talents of Ishiro Honda. Though he couldn't escape the giant monster capers that defined his filmography, he could still infuse them with the humanity and fine craftmanship that one might not expect in such low caliber fluff. By the year 1963 when MATANGO was released, he was already swept up in the kaiju factory, and in fact that same year also saw the release of Honda's sci-fi adventure ATRAGON (which introduced sea serpent Manda). The small personal films he directed early in his career alongside his tokusatsu movies would eventually fade away, and he would only make only more monster-free film (the romantic comedy COME MARRY ME in 1966) before retiring from feature directing with 1974's TERROR OF MECHAGODZILLA. In this historical context, MANTANGO is almost a bridge between the humanist stories he was personally invested in and the creature flicks that brought in the audiences. If you're a Godzilla fan that would like a break from the usual meat and potatoes kaiju diet, why not give in and try the mushrooms sometime?

Have a taste…
Geplaatst door Luca op 9:11 AM