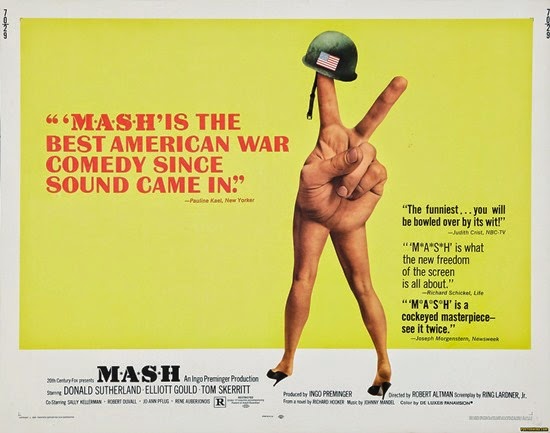 Hello friends, and welcome again to Derp Blog Into Darkness, my blog series with the most instantly dated title of all! Today I present to you my thoughts on MASH, Robert Altman’s 1970 TotesNotVietnam-set anti-war comedy starring President Snow, Monica’s Dad and Captain Dallas Without The Stache. Sorry, I was being antagonistically millennial there. Could have been worse though! Could have referred to Tom Skerritt as Sheriff Brock!*

MASH tells the tale of a Mobile Army Surgical Hospital in the Korean war, although it is perhaps wrong to say it tells a single tale. Rather, the movie shows the viewer a bunch of vignettes mostly centered around Hawkeye Pierce (Donald Sutherland), Duke Forrester (Tom Skerritt) and Trapper John McIntyre (Elliot Gould). They’re honestly so unrelated (from a trip to Japan to an inter-MASH football game) they might as well have been about a bunch of different doctors at a bunch of different army hospitals with some minor rewrites.

This is only my second Altman movie ever (check out my first – some vague memories of PRET-A-PORTER notwithstanding – right here) and I’m actually pretty interested in seeing more! I liked the ambling, improvisational nature of both PRAIRIE and MASH, and Altman does seem to have a knack for assembling really awesome casts.

The movie gets off to kind of a weird start, with an impressive aerial tracking shot scored to that evergreen hit “Suicide Is Painless” cutting to a barely audible short conversation between a colonel and his assistant. It later becomes a running gag that Blake (the colonel) and Radar (the assistant) constantly talk over each other, with the superior officer never really cottoning on to the fact that his subordinate pretty much always anticipates his needs. What a clever metaphor for military brass being far removed from the grunts in the shit!

The movie never really is in the shit, however, although it does get in the blood ‘n guts. Which I suppose probably does qualify as the shit for army surgeons! It’s an interesting artefact from a transitional age in cinema where the old Hollywood epics were starting to lose their luster (PATTON in the same year!) and we were heading towards SERPICO-land. People say fuck! There’s boobs! The operation scenes are bloody as hell!

I was pretty consistently entertained by this movie, but there’s definitely some cringe moments in there for a 2015 audience. Fred Williamson’s guy (a football player!) is called SPEARCHUCKER Jones and Trapper John at one point asks for a nurse that’s good at her job and “won’t let her tits get in the way” WHATTTTTT

For a movie that’s all about anti-authority shit, the white/male POV definitely still rules here. Understandable since we’re still not too great about it nowadays, but I just wanna warn anyone that hasn’t seen this yet that there’s definitely a couple of Michael Bay style jokes in there. But hey, I like Bay, so…

My good vibes toward MASH are probably also attributable to the depressing fact that AMERICAN SNIPER is currently the #1 movie of the year in the US right now. We could do with some type of “soldiers on the front not really diggin’ this war” movie, I think!

*Young Skerritt without a moustache looks weird as shit, and not a little bit creepy!