I Live Near A Cinema: EXODUS: GODS & KINGS

I recently moved back to my hometown, within walking distance of a cheap movie theater. While this is a great amenity for anyone who likes movies, it also presents a conundrum for the ever-entertainment-seeking First Worlder. It turns the cinema into a really big TV set. “Maaaan, there’s nothing on… ugh god, I don’t wanna get up though… ughhhh FINE, I’ll watch MONEY TALKS.” So in this situation, sometimes you’ll walk to the cinema, realize you’ve actually seen everything that’s playing that you wanted to see, and you end up seeing… 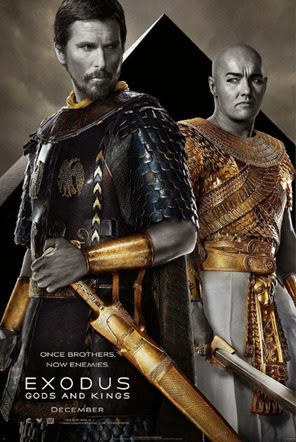 One of the delights of being with a person who was cut off from a large part of popular culture during her youth, is the ability to introduce them to movies that, in time, have perhaps gained a rose-tinted sheen borne from many a youthful, uncritical viewing. It’s wonderful to have films taken for granted by movie geekdom being examined freshly by rational adult eyes. It was during a viewing of Ridley Scott’s HANNIBAL that my lovely wife deadpanned:

This caused no end of amusement for me, and actually triggered a more thorough examination of Scott’s work. Though I am not as harsh as to say I only like ALIEN, my opinion of him had shifted from “He’s fallen off a bit in recent years…” to “Holy shit, he only does care about a pretty picture, doesn’t he?”

Ridley Scott, not that far off from Tim Burton!

The latest must-see Sir Ridley, EXODUS: GODS & KINGS, had me hurrying to the cinema only a month after release and also because my sister bought us dinner nearby. That old Scott magic…

I also figured having a lapsed Jehovah’s Witness with me surely would result in some interesting running commentary on Biblical adaptation choices, and I was not proven wrong!

First, the bad news: EGK is a piece of shit of the worst kind. It starts off genuinely int—no, wait, hold up, it doesn’t. My bad.

This was already pretty giggleworthy: Ridley playing to the cheap seats and just laying out the setting in the laziest possible way. Unfortunately, the movie gets sorta good for the next 15-20 minutes. Christian Bale, Joel Edgerton and John Turturro make a compelling triumvirate as the two sons (natural and not) of an aging pharaoh and their father. Bale is actually jesting and smirking in this part of the movie. His Moses is a cocky prince who’s pretty happy with his station in life – wow, not since AMERICAN PSYCHO!

Joel Edgerton’s Ramses meanwhile is amazing! The young(ish) pharaoh is basically a trust fund bro who wants what’s coming to him and can’t handle any situation in any fashion other than “Uhhh hang more Jews!!” At one point Moses finds him posing like a male model with a white cobra draped around his shoulders as he wistfully gazes into the flames…

An Egyptian soothsayer (Indira Varma, too good for this shit) says that in a battle to come, one guy will save another. The saved guy will go on to have a high status, but the guy who did the saving will be the true leader. You know where that’s going!

After a battle with invading (or are they?) Hittites, Ramses is pissed because that very thing happened. This is a weird thing to put in, because it kind of shows us that either the god of the Hebrews isn’t the One True God, or that he was speaking through an Egyptian soothsayer, allowing her to falsely claim his words as those of Sekhmet. That doesn’t sound like our guy to me! It’s almost as if the film’s five credited screenwriters were just tacking shit onto an ancient  to adjust it for 21st century blockbuster viewers’ expectations… I must disappoint you: Moses did not turn out to have Super Blood.

A sekhment (hehe) follows where Moses is appointed to oversee a quarry and unmasks Egyptian corruption by an unscrupulous viceroy. It’s solid stuff, showing Moses to be a wily politician as well as an able warrior. It is here that his Hebrew lineage is revealed to him by Jew #1 played by Ben Kingsley. This movie is very good at wasting great actors on nothing parts, to the point where I believe a Director’s Cut not unlike Kingdom of Heaven is surely forthcoming.

This insult ticks Moses off so badly that he kills two soldiers who beckon him as “Hey you there, Hebrew!”. Now, the soldiers WERE sent to kill him by the corrupt viceroy, but they had not yet attacked him at that point. It’s pure white hot racist denial rage by Moses. I thought it was very impressive to have a mainstream blockbuster lead character exhibit such malevolence!

The idea of Moses as a complex, maybe even bad man, is struck down when he is exiled from Egypt after Ramses learns of his heritage. He bullies some shepherds away from a well because he is more thirsty and has a sword. But these shepherd were actually bullies themselves, who bullied some hot chicks with sheep away from the water, whom Moses then gracefully invites back to the well.

The casting of Spanish actress Maria Valverde as Moses’ wife-to-be Sippora (after a mildly pleasant conversation in which he was apparently highly impressed by her weaving) is perhaps even more dubious than casting Australian/Welsh/American actors as Egyptians and Hebrews. Casting a latina as a Middle Eastern woman cuz…. Ridley scott he say “ehhh sorta brown”? Glad to see latina actresses in high profile roles but it’s a double edged sword here!

Speaking of female characters! Haha! Well, it’s always shaky ground if you’re gonna adapt Bible tales – often you can just give the character a NAME and you’ll have improved on the source material, but EGK has one scene where they hilariously rub your face in the off-screen story of a female character that maybe could have been interesting?

During the dramatic confrontation with Ramses and his mother (Sigourney Weaver, she of the five lines in the entire movie) about Moses’ heritage, Miryam (Game of Thrones’ Tara Fitzgerald), Hebrew handmaiden to Moses’ adoptive mother Bythia, reveals herself to be Moses’ real sister.

Years ago, a prophecy (another one!) was made that a great leader of Hebrews would arise and shake Egypt to its core (another CORRECT one!), so the Pharaoh had a bunch of Hebrew babies killed. Moses’ parents were clever though, and gave him to his older sister Miryam to hide. She put him on the Nile in a basket, placed cleverly so that he would end up at a spot where the barren Bythia bathed. Then, all she had to do was worm her way into the palace and become Bythia’s maid and presto! Moshe saved!

Wait, that’s some really fucking clever maneuvering from a teenage slave girl. How the hell did she do that? You’re really just gonna have her tell us this in thirty seconds?

Anyway back to the men!

Now here’s where all the god shit comes in, and I was actually still sort of on board here. Moses actually gets CONKED on the head while tending some sheep, and this is where he sees God, a whiny little English kid.

Clever, you movie you! Make it ambiguous as to whether or not Moses was a crazy man or if he was actually God’s chosen… but nope!

After some terrorist attacks on granaries, the whiny kid returns and tells Moses this shit isn’t going fast enough, so he’s gonna start doing it himself. Cue the ten plagues!

The ten plagues are actually a really fun bunch of setpieces where people are eaten by crocodiles and covered in locusts and stuff, and here’s where Ramses absolutely shines! He gets to do cartoon shit like stare angrily and scowl while frogs hop onto his head, and he gets covered in boils as he thwacks flies off his face. There’s even a running gag where he hangs advisors who have proven useless!

Now the movie AGAIN tries to have it both ways, with a scientist played by Ewen Bremner explaining away the first four or five plagues. But then God keeps coming and either you have to believe in a shit-ton of coincidence or just acknowledge that it’s God, guys.

While the ten plagues are a good bit of fun, they’re also pretty much where the movie dies like an Egyptian baby, as it resolutely takes the side of “God is real” and much more important than Moses, as Bale pretty much spends this portion of the movie going “oh no!” and “you sure, God?” if he’s on screen at all. This is where my wife’s later remark that “they took away Moses’ staff and gave him that stupid sword instead!” really hit me. Although the Biblical Moses is too firm a believer at that point to make a compelling protagonist, the staff/serpent throw down incident being completely erased from the narrative to make way for Moses just fretting and standing idly by as God takes care of shit is indicative of a boring, non-committal script.

After this CGI-and-lulz onslaught, the actual titular Exodus is an underwhelming affair. Moses is pretty much the only Hebrew we got to know a little over the course of the movie, so it’s basically a bunch of really expensive crowd shots of people walking away. There’s a final cool bit of empty spectacle a bit later, with a mass crash of chariots and the sadistic death of a weaselly Egyptian we’d been following the entire movie, but by that time any enjoyment you’re picking out of the movie is completely apart from what the filmmakers were intending.

Put it to you like this: EGK is a movie that has Moses and Ramses facing each other at the bottom of the Red Sea one on one, charging each other, but it DOESN’T end in a fist/swordfight. If you’re gonna go stupid, go all the way stupid! Not since THE PATRIOT and Emmerich’s disgusting refusal to have Jason Isaacs be impaled on the Stars ‘n Stripes have I seen such negligence…

The ten commandments also sort of happen in a half-assed way, with a hilarious shot of the golden calf far off into the distance, unacknowledged by either God or Moses who are too busy exchanging “hehe we made it bro” pleasantries on top of Mount Sinai. It comes across not as a dramatic illustration of the Hebrews’ faithlessness in the desert, but a wacky cultural tic we just hadn’t been told about, like the Egyptians and their love of Mascara.

“The Israelites have lives outside of Moses too, you know!”

E-40 once said “Imagine all the Hebrews going dumb, dancin’ on top of chariots and turnin’ tight ones”. EXODUS: GODS AND KINGS sometimes flirts with being that movie, sometimes with being a decent, religion-free retelling of the tale of Moses, but never commits to either.

Keak Da Sneak probably would have made a better Joshua!
Geplaatst door Luca op 4:33 AM