In anticipation of the upcoming Memories of Monster Island e-book, Wholly on the Level brings you a very special edition of Kaiju Kavalcade! Strap yourselves in chaps, it’s gonna be a bumpy yet strangely uneventful ride! 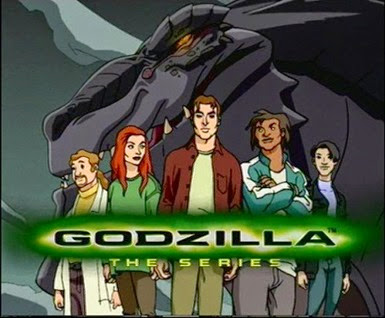 My foolish, JURASSIC PARK-loving child-self of the late 90s quite liked Roland Emmerich’s GODZILLA. It had a big T-Rex and a bunch of raptors. That’s enough for a good movie, right? Combined with having grown up on the 80s Ninja Turtles cartoon and Thundercats, my brief, half-remembered glimpses of GODZILLA: THE SERIES from its airing on the BBC had me start this (sort of) rewatch with a note of optimism. Okay, it’s probably not a good sign that my vague positive memories of this show were from a time when I liked Emmerich’s movie and had good memories of the two aforementioned cartoons. But hey, Emmerich had removed so much of what made the G-man tick in his movie, replacing it with nothing, that a whole two seasons of Godzilla fighting other huge monsters surely had to have been a step in the right direction… right? Sorta! While GODZILLA: THE SERIES brings Godzilla closer to his native element, it also retains some unfortunate failings from the ’98 movie.

Picking up right where the movie left o—no wait, that’s not entirely accurate. The first episode actually starts with a really embarrassing-looking recreation of the final moments of GODZILLA 98. Not only do we get to watch a poorly animated version of the Zilla chase with the Reno-driven taxi, the resemblance to Jean Reno is… iffy. Of course, animated sequels or adaptations of live action properties aren’t obliged to be 100% faithful to the source material – that’d be boring! Artistic license man, go right ahead! In this case, however, the quality of the show just isn’t up to snuff with the comparisons it’s inevitably going to draw. Please consider something that looks so bad it just isn’t up to the quality of GODZILLA 98. G:TS has protagonist Nick Tatopolous (voiced by an amazingly terrible Ian Ziering) convince Major Hicks (actually Kevin Dunn reprising his role from the movie) to send a team to scour the tunnels under Madison Square Garden to make sure there aren’t any babyzilla eggs left. Of course THERE ARE and the last remaining babyzilla imprints upon our boy Nick like a magic vampire baby. Also, it is sterile so the extinction level event threat that the movie Godzilla posed is completely neutralized. He’s now a really big dog basically!

Nick establishes H.E.A.T., one of those classic comic book Cool Dude organizations with acronyms that are also words. Depending on the episode, it stands for either Humanitarian Ecological or Environmental Analysis Team. Who is all SUPERHEATED? Why, more GODZILLA 98 veterans, of course! There’s Elsie, the bespectacled red-headed paleontologist, and Mendel Craven, the guy who sneezed a lot (and whose actor voices him). New team members include Randy Hernandez, a slacker hip hopper metalhead surfer dude college intern. He’s pretty much whatever any episode needs him to be to desperately connect with FOX KIDS viewers! Finally, we have Monique du Pré, a French secret service agent left behind by Jean Reno to keep an eye on zeir leetle ackseedent. You can tell she’s a spy cuz she’s in all black with dark eye shadow and lipstick. I guess the belly shirt is to fit in with Americans? Hey Travis, what did you think of this MUTATION! 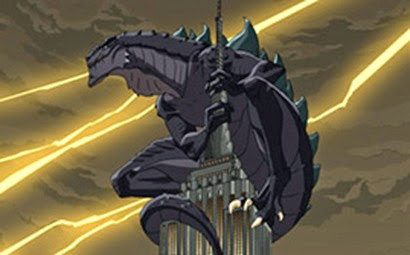 Luca, we could form our own H.E.A.T. team to hunt down these kind of mutations as children's programming was lousy with them in the late 90s/early 2000s. G:TS was one of many cartoons put out by Sony to extend the freshness dates of their franchises. We were also treated to MEN IN BLACK: THE SERIES, JUMANJI: THE SERIES, ROUGHNECKS: STARSHIP TROOPERS CHRONICLES, and even EXTREME GHOSTBUSTERS with a new group of multi-ethnic, ghostbustin' teens led by Egon Spengler. You can sense that Sony really wanted to milk these properties dry, and darn it all, they're gonna shove more Zilla in your face and Saturday morning cereal bowls, and you're gonna like it! Unfortunately, those same boring humans from the 1998 movie are coming along too. Nick is given a more youthful, athletic look but retains that black hole of charisma Matthew Broderick originally brought to the role. It's made even worse because Ziering is pretty horrible at voice acting. You how word balloons in comics have embolden words in the sentences for emphasis yet it's understood that the dialogue would flow naturally? Ziering speaks as though those embolden words have to be shout enunciated in actual speech. “We have to keep GODZILLA and that giant BUG away from the WATER.” He also does it in a tough, action-y movie voice that doesn't help him. The other characters are pretty much their one adjective descriptions: sassy Elsie, nerdy Mendel, hip Randy, french Monique.

But what about the domesticated Zilla Jr.? He's pretty personality-less too (like owner, like pet), but at least the cartoon gives him back the proper radioactive breath that was absent in the movie. He'll need it too for the scores of mutations the series throws at him. G:TS is your standard “monster of the week” show with all sorts of creatures and freaks of nature that Zilla and H.E.A.T. have to deal with. None of these new foes are as memorable as Mothra or King Ghidorah, but there's a fun variety displayed throughout the run. There are standard bugs, lizards, and mammals mutated by radioactivity, as well as a few ancient, slumbering giants now woken due to pesky people. Throw in some scientific anomalies (one episode features an electrical monster that is actually the physical manifestation of an human insomniac's repressed anger!), and you've got an eclectic mix of kaiju. Heck, even the original Zilla from G'98 is revived as a cyborg under alien control!

It's that willingness to go pulpy that puts G:TS in a peculiar spot. The vapid characterization and fairly limited animation certainly didn't help Zilla become more palpable to audience's tastes. And yet, having the cartoon include things like evil aliens or redneck monster hunters shows that the people involved seemed more eager to go into “crazy kaiju” territory than the G'98 filmmakers. I doubt anyone would find this series memorable, but for a toon that had to strip off the meat from its box office turkey, it made some passable leftovers. Salvageable, pleasant enough leftovers. Even though we were quite negative about Zilla The Movie, am I being too kind to Zilla The Cartoon? 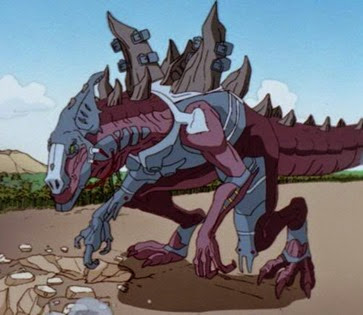 In order to answer this in the negative, Travis, we should take a step back and consider the TV of the late 90s. In our era of streaming video on demand, binge-watching, season-long arcs and the dreaded SHOW MYTHOLOGY, we can’t really fathom picking and choosing a couple of episodes from a show and then being done with it. If you want a sampling of an American creative team trying out that old Godzilla stand-by of aliens wanting to take over the world via giant monster control, try the season 1 episode “Leviathan”, followed by the “Monster Wars” three-parter, also from the first season. If those eps please you, by all means, check them all out. The entire series is on Netflix Instant (for the moment), so there’s no one to hold you back.

If I can say anything nice about the show, it’s that the opening credits theme song is pretty catchy. I can hum it off by heart, and it’s been months since I last heard it! Like the American Godzilla itself, the monsters he faces are pretty cool-looking, ranging from giant regular animals to an actual goddamned sphinx. Speaking of the pulpiness the show dares to approach: in one episode there’s even ghosts (“The Ballad of the Gens du Marais”)! I’d recommend anyone who’s still legitimately interested in the show after seeing the episodes recommended above to just browse around, check out some synopses, and see what strikes your fancy. There’s a lot more interesting stuff out there for you to be wasting time on every single episode of this series! Like, uh… reading about Godzilla… yeah, that’s a good investment!

I agree with you on the series’ good points, Travis, and they do indeed make it stand out over the Emmerich film. They just can’t counteract the rote filler stuff that this show is padded with, even at only two seasons. The Emmerich movie doesn’t have the cool stuff the show has, but it also takes up far less of your time. Use this information how you will! I hope your brain doesn’t blow up like a N.I.G.E.L., Dr. Craven’s exploration bot who dies every episode in what seemed to me like a tip of the hat to SOUTH PARK. Only Trey Parker and Matt Stone stopped doing it eventually! The only thing GtS stopped doing was being aired – hi-yoooo! 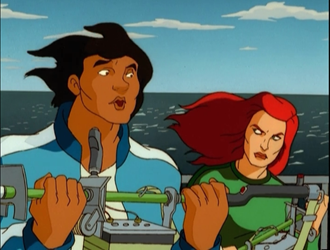 Ohhh Zilla burn! I'll add that if you were a fan of the Hanna-Barbera Godzilla cartoon from the 70s, you might wanna give GtS a try too since they pretty much share the same plot. Both shows have scientific teams that cruise around the world exploring monster phenomena, and sooner or later, they call upon G when they're getting their asses kicked. Heck, both groups also sail around on a fancy, schmancy sea vessel stacked with sciencey doohickeys and weapons (the Calico in the HB toon, the H.E.A.T. Seeker in GtS). They also share annoying sidekicks in the form of Godzooky (a smaller, goofier flying version of G) and N.I.G.E.L. respectively. GtS might have the edge over the HB series for fans since it crushes or blows up N.I.G.E.L. on a consistent basis, while many kaiju viewers would've gladly seen 'lil Jar-Jarzilla die in many, many violent deaths.

In pop culture these days, we've seen a lot of flash in the pan celebrities from yesteryear attempt comebacks by mocking (or even destroying) their public image so they can build it back up. You could say that Zilla himself as slowly crawled his way back into acceptance with G-fans too. Though his feature film bombed, he had a small moment of self deprecation as he was annihilated by Toho's Godzilla in FINAL WARS, and in IDW's current RULERS OF EARTH comic series, he's been reintroduced as a very lethal, vicious creature. All of this plus a not-too-bad cartoon might rehabilitate him in people's eyes. There are many poor, pathetic animals in this world; won't you take in Zilla today?