What a wild and thunderous ride it has been, Travis. I will not say do not weep, for not all tears are an evil. I will also say I think I’ve exhausted RETURN OF THE KING references thoroughly after having reached ending milestones for three different eras of Godzilla, so excuse me for going to that well again. I came to Godzilla with the vaguest impressions laid on me by children’s pop culture, a half-remembered late night viewing of a Heisei movie, and Emmerich’s 1998 disaster. I leave him thirty movies (for the moment) later, far wiser in my nerd knowledge and with a vast new wing added to my mind palace of useless information.

Real life circumstances conspired against us and saw our journey only halfway finished by the time Gareth Evans’ 2014 iteration of the big guy came out, so please accept our apologies, dear reader, for not sticking to our original mission statement. We hope that after our premature climax the remainder of the reviews were not tarnished by our appearing too tired or burned out on Big G. Unlike some Godzilla movies, it was a labor of love all the way!

On this journey through the archipelago of the Monster/Solgell/Birth islands, I have learned that while he may certainly resemble one to the untrained eye, Godzilla is no monolith. Whether your jam is the Lovecraftian spectre from the sea in the original GOJIRA, the ghost of Japan’s war crimes in GMK, the superhero from TERROR OF MECHAGODZILLA or Hollywood’s most recent guardian of vaguely defined natural balance, the big guy must always stand for something. Like Batman or James Bond, there are many Godzillas, all reflective of the times that they belong to.
Modern day bard of the proletariat A.P. Clarke once said that to really understand an era, you should look to its mainstream comfort food. Watching, reading, or listening to the visions of auteurs with a real message will enlighten you and broaden your vision, but there is insight at the bottom of a box of popcorn as well. Take the unexpectedly sad little moments sprinkled throughout ALL MONSTERS ATTACK, an entry derided by fans for its lack of weight and kid oriented tone. The moral of this children’s film does not state “Make time for family”, it is “Sacrifices in daily life are necessary”. That’s unthinkable on, say, an episode of any Disney XD sitcom. In an absolute kiddie panderfest like AMA, that really says something about increasingly industrialized late 60s Japanese society.

Also: monsters smashed shit up good. Let’s not grow too big for our breeches like a derp-voiced Minilla here, and pay some tribute to the real reason why we watch these things: big rawr go boom. They sure did a lot, and it made me laugh and sometimes go “whoaa!”. And that was very cool.

I know that there is very little tolerance for cheese and earnestness among a readership who likes Godzilla, but I will venture into these murky waters anyway. My favorite thing about doing this whole series was my close collaboration with Travis Kirkland. Believe it or not, dear readers, but I barely knew the man before this besides enjoying his occasional internet witticisms! This journey I probably would not have finished without the support we gave each other constantly, and with a minimum prodding. I think I can recall maybe two or three “You okay, dude?” messages over a whole year. Yes, we kept each other going! Friendship bloomed on the kaiju battlefield…

Oh, and because I am a stickler for tradition: Sayonara, Gojira-saaaan! Sayonaraaaaaaaa!

With pop culture becoming more and more instantly archived, it's easy to be insulated in a cocoon of nostalgia.  Take one look at social media, and you could surmise that this generation is made up of perpetual children, happily lost among the cartoons and toys they grew up with.  Since studios are ready to recycle any properties for the sake of sentimental box office, anyone can be “forever young” watching new adventures of their favorite heroes.  Speaking for myself, I still enjoyably guzzle down the pop of yesteryear, yet I try not to have it dominate my life for the sake of adulthood and the reassuring wisdom that comes with it.  However, the giddy adult who sat in the dark theater to watch Gareth Edwards' GODZILLA was the same impressionable kid that spent his school night captivated by his first sight of kaiju films on midnight TV.  Forever young.

What have I learned about the big guy in the intervening years?  As Luca has pointed out, Godzilla has always been a representation of any important matters (nature, science, history, heroism, etc.)  Yet what underlies all of these portrayals?  Power.  Like many monsters, he's the grotesque that upsets our balance when arrogance is left unchecked.  He cannot be defeated; mankind can only shift and adjust to his existence.  His destruction can bring about our end, or save us from horrors more unimaginable than him.  In any case, he's a force that can't be contained.  When Toho unleashed GOJIRA in 1954, they couldn't have imagined the legions of filmmakers and fans they would inspire all these years later.  Whether you're a helpless Tokyo citizen running from his disastrous path or a fanatic filling up your room with kaiju memorabilia, it's Godzilla's world.  We're just living in it.

Before we part, I must express gratitude to a few people.  Dad and Mom indulged my childhood with its constant need for Godzilla anything, and it's truly them that set off the atomic bomb that mutated a young boy into the G-writer he is today.  A huge thank you to all the readers, friends, and fans that have joined Luca and I on our journey.  Many of you came out of the woodwork as G-fans, and it was always delightfully surprising to hear one of you ask when the next review was coming.  Much thanks for your support and nice words.  Most of all, my greatest and sincerest gratefulness is to my writing partner Luca Saitta.  I've always wanted to do a long term G-retrospective, and it was Luca who had the idea to team up for this adventure.  It's been a pleasure seeing you indoctrinated into the world of kaiju, and seeing your reactions was the true highlight of this experience.  I couldn't have asked for a better ally this side of Anguirus.

I imagine Godzilla will always be a part of my life.  A foot-tall plastic toy of the big guy given to me as a childhood present still takes residence in my room, having seen many action figures and dolls of my younger days come and go.  It stays in my life because it reminds me of pleasant times.  Of buildings smashed to smithereens.  Of roaring monsters grappling and wrestling.  Of examining film by film why he's truly earned the title of the King of the Monsters.  It's these impressions and many more that are my fondest, happiest memories of Monster Island. 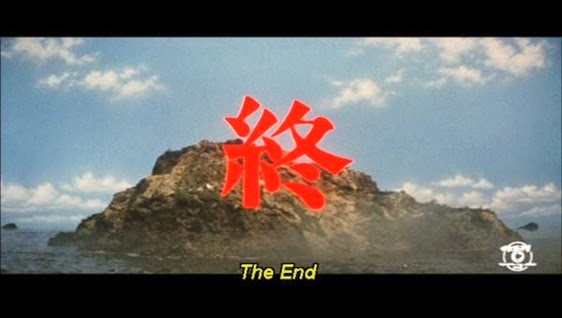