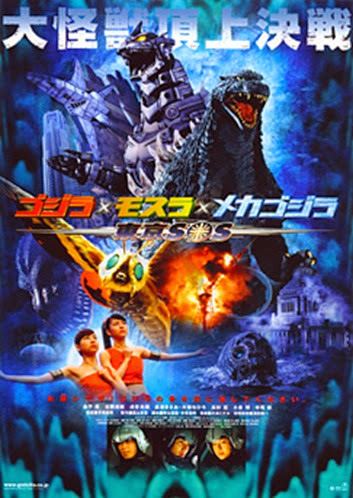 By this point in the Millennium era, you're probably used to Toho hitting the reboot button again and again. But surprise! GODZILLA: TOKYO S.O.S. directly follows the events of GODZILLA AGAINST MECHAGODZILLA, and even Yashiro from GAM makes a cameo to say farewell to Kiryu before shipping off to America. Godzilla is still at large, and the usage of Kiryu remains a controversial topic as people fear that its sentience may cause it to run amok again. Humans aren't the only ones concerned with the big robot though. Mothra and her twin fairies soon appear in Japan to deliver a warning: the original bones of Godzilla encased in Kiryu must be brought to the sea for its final resting place, or Mothra will ravage mankind for disrupting nature. You'd think the government would learn by now to fully respect the environment lest you fear the wrath of a giant moth goddess but whatever. Moral and ethical quandaries are set aside as Mothra, her two newborn larvae, Kiryu, and the military are thrust into an epic, final battle with the King of the Monsters.

Not only is SOS a sequel to GAM, but it's also a follow-up to the original MOTHRA from 1961. G-veteran Hiroshi Koizumi reprises his MOTHRA role as Dr. Shinichi Chujo, now retired and caring for his son Yoshito and grandson Shun. It's really heartwarming to watch him reunite with the twin fairies and fondly reminisce on his time on Infant Island. We've talked before about how Mothra tends to dominate the G films she stars in, and SOS is no different. Her benevolent presence is in contrast to the rest of the rough and tumble kaiju, and she always brings a glimmer of hope to the proceedings. But oh man, let's talk about the Mothra feelz in SOS! Similar to MOTHRA VS. GODZILLA, she fights to the death with Godzilla, and her caterpillar offspring hatch out of their egg to avenge their dying mother. As a final act of bravery, she sacrifices herself by shielding her babies from G's atomic breath with her body and erupts in a Phoenix-like, moth-shaped explosion of flames and twinkling sparkles. Sure, we've seen this circle of life with Mothra play out before, but you can't help but feel a little sad when the two larvae chirp mournfully over the loss of their mom.

MOTHRA isn't the only Showa thread SOS picks up. I joked in the GAM review about including SPACE AMOEBA in this a la carte continuity, and by golly, I totally forgot that SOS drops a big ol' reference to the 1970 film in the form of the dead carcass of Kamoebas (the giant rock turtle from said movie). His body is found washed ashore on the beach, and it's assumed that he was a victim of G's attacks. The characters even talk up specific plot points from AMOEBA (retitled and redubbed as YOG: MONSTER FROM SPACE in America)! I guess if you wanna drop an Easter egg, you gotta drop it hard! Of course, SOS also follows GOJIRA as the spirit of the first G still inhabits Kiryu. Though FINAL WARS would be the last Toho entry (for now...?), there's a nice, symbolic finality to SOS's ending with the original Gojira and the Millennium Godzilla plummeting together to their end leagues below the seas. So many kaiju emotions going on in this flick, Luca! 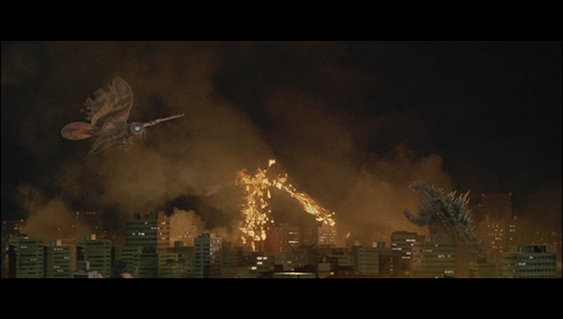 Oh man, are you kidding me with these feelz right now, Toho? TOKYO SOS really doubles down on GAM’s casual mention of MOTHRA and WAR OF THE GARGANTUAS by making the events of MOTHRA absolutely crucial to the story. I was utterly delighted to see Hiroshi Koizumi again, as he was one of my favorite Showa stars! He was also one of the very few who got to reprise a role from MOTHRA to MOTHRA VS. GODZILLA. Really glad I watched our favorite moth goddess’ original outing now so that I can fully appreciate the emotions washing over me to see this classic Toho actor come back. I’m sounding super snarky, but I’m not! Koizumi has this really warm, affable energy to him that I greatly enjoyed in a series of movies where humans are usually a sideshow or an afterthought. To see him in a 2003 movie as a grandfather is almost like his destiny as an actor fulfilled. This is what you were born to do, buddy! Thanks, Toho for going full tumblr on us with this one!

It’s not just Koizumi’s return and the pick-and-choosing of what seems like the director and writer’s favorite Showa movies for background, it’s that whole tone of sorrow and regret that permeates TOKYO SOS. Mothra is already the most melancholy kaiju of all, but now it’s bleeding through to MechaGodzilla as well! Akane tells mechanic protagonist Yoshito that Kiryu looks “sad” and that “maybe he doesn’t want to fight anymore.” This is all accompanied by sweeping strings and a sad goodbye to the giant robot dinosaur as the last movie’s protagonist goes to the States for “strategy training.” I think it’s, in fact, quite telling that this movie’s human hero is a mechanic rather than a hot shot Maverick pilot or tomb raiding Indiana Jones style scientist. TOKYO SOS is all about atonement, about fixing the errors of the past, to a far greater degree than we’ve seen in any Zilla movie so far.

It’s strange to think of this movie as a direct sequel to GAM, since it makes everything in that movie look like merely a prelude to this one. That whole “Kiryu malfunction” episode that didn’t amount to anything plot-wise there, has incredible consequences in this film. You know Travis, I’m starting to think that this twosome are near my personal top? I dunno man, that whole Japanese “must atone for my sins” shit really works on me, and Michiru Oshima’s uber-romantic music reminding me of Joe Hisaishi (veteran of many a Studio Ghibli production) probably helps.

I agree that Oshima's score is really effective, and of her three contributions to the series (GODZILLA VS. MEGAGUIRUS, GAM, SOS), this one's my favorite. I particularly enjoyed how she recalled the cosmic/tropical sound of MOTHRA'S music when the twin fairies make an appearance. Her finale accompanying the image of Kiryu and G plummeting into the depths of the ocean is also great and ranks up there with Akira Ifukube's Monsterland farewell in DESTROY ALL MONSTERS as one of the best codas in the G movies. Again, SOS would've worked as a fine last entry, but FINAL WARS decided to end it all with a bang. To compare, SOS is a dignified, slow fade for the King of the Monsters while FW is about as HYPER SMASH CUT as any Godzilla fanboy would clamor for.

Of course, fanboys always clamor for a good ol' kaiju tussle, and SOS delivers in spades. Unlike the other movies, SOS only has one monster fight, but it's quite a doozy. G and Mothra have brief skirmishes with the military before then, but it's all about the battle royale between G, Kiryu, and the Mothra clan that dominates the last two acts. The various peaks and valleys of the match are paced very well, and the sight of men in suits wrasslin' and swatting at CG things and puppets never feels interminable (to be fair though, that's something I'll never tire of myself). This is also probably the best on-screen Mothra, or at least the most fluidly animated one. Sometimes it's really hard to tell which shots are her being computer animated or puppeteered on set. Those wings are impressive too! They're not stiff as usual but instead flow and waft through the wind to give an added dimension of life.

Speaking of life, GAM and SOS spend a lot of their running time debating if Kiryu is truly alive. There's much contemplation about the ethics of weaponizing the dead '54 Gojira, and it's a pretty serious affair. However, giving Kiryu full sentience in the climax gives me a giggle worthy moment. As Kiryu and G fly to their final destination, Yoshito is trapped inside the body of robo-G. Finally an escape hatch is blown open, and Yoshito is left dangling above the ocean waiting for rescue. Before he lets go of Kiryu's body, the spirit of Gojira/Kiryu lights up the interior computer screen to deliver a final message: “SAYONARA, YOSHITO”. At long last, man and monster have an emotional understanding! It felt like the Godzilla equivalent of the T-800 giving a thumbs up as he melts away in the molten steel in TERMINATOR 2. Ya gotta chuckle at the well intentioned corniness of it all. 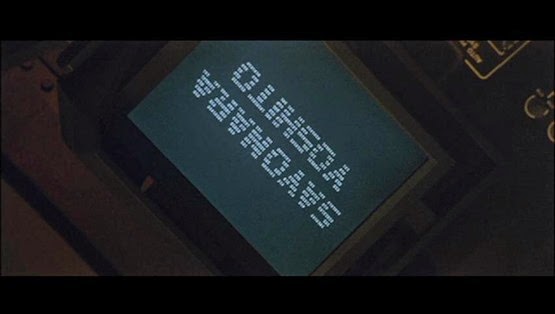 This is probably racist, but there’s something about the Japanese that just makes me buy it. It’s corny as shit, but they really, really mean it, man. They’re not winking. They’re really trying to tell you that this robot dinosaur is sorry about his actions in a past life when he was still a regular dinosaur and killed all those people. And he’d like to thank this lowly mechanic who helped him to come to that conclusion. Sayonara, Yoshito. Sayonara. I think it’s a pretty cool inversion of the Showa trope of the movie’s human heroes standing on top of a cliff or ridge or whatever, overlooking the sea, waving at Godzilla, yelling “Sayonaaraaaa Gojiraaaaaa!” This time, it’s Godzilla saying goodbye to us.

You know, I know that the M-series movies aren’t sequels to each other (well, except this one to GAM), but there’s a beautiful symmetry here with G2K ending in that hilarious “Oh well, Godzillas gonna Godzilla” rampage, and TOKYO SOS concluding with what amounts to Godzilla’s superego taking down his id. It is totally weird that this ISN’T the final Zilla movie. I certainly wouldn’t have minded to have gone out on this high note.

But you know, if you tell me that the final Toho Godzilla movie is a big dumb blast of a cartoon, who am I to disagree with that? I, for one, can’t wait. Join us next week for one last blow-out in GODZILLA: FINAL WARS!