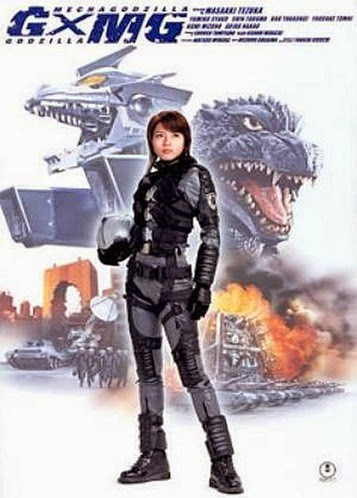 I should try to dismiss things beforehand more often. When I went to see IRON MAN 3, I went out of a certain sense of obligation, being a Marvel fanboy and all. I figured I’d already seen riffin’ RDJ in two Iron Man movies, an Avengers, and two Sherlock Holmeses – why should I shell out for that AGAIN? And then IM3 was my favorite Marvel movie to date. GODZILLA AGAINST MECHAGODZILLA’s title made me sigh. This would be the fourth movie where G fought MG – five if you’re cynical and count Moguera in GODZILLA VS. SPACEGODZILLA. I’d seen MG as an alien robot out to conquer the Earth for its masters and as a human-operated mech employed to defend Japan against Godzilla, so I figured I’d pretty much seen it all when it came to the chrome kaiju. But GAM had a curveball to throw me: this MechaGodzilla was built around the bones of the original Godzilla. Let that Cronenberg shit sink in. This makes me curious if Toho was keeping an eye on Fox Kids’ Godzilla cartoon show, which ran in 1998 and ’99, a few years before the release of GAM. In this sequel show, aliens revive the Godzilla from Emmerich’s movie with cybernetic implants to fight the second one. They simply referred to it as “the Cyborg” because Toho had only licensed Godzilla out, so no calling it MechaGodzilla. Still, you gotta wonder if they were looking out for what Fox was doing with the license after the ’98 movie besmirched their good name so!

Masaaki Tezuka is back for his second outing directing a G-movie, after the fun but somewhat overlong MEGAGUIRUS, bringing screenwriter Wataru Mimura along for the ride. It’s funny that Mimura’s only pre-Millennium Godzilla credit actually was the Heisei GODZILLA VS. MECHAGODZILLA 2. Never change a winning team, I guess? But I’m thankful for these two bringing in one of the most welcome elements from their previous collaborations: a female protagonist.

Akane Yashiro is also a military woman who starts the movie off in a disastrous raid against Godzilla. Unlike MEGAGUIRUS’ protagonist Kiriko however, she’s the one who screws up and sends an armored vehicle flying over a cliff to be trampled by G. This makes her a pariah at work and hated by Hayama, a fellow soldier whose brother was among the trampled. The character’s journey isn’t so much motivated by revenge against Godzilla as much as it is by reconnecting with humans, a redemption that comes in the form of biologist Yuhara’s little daughter Sara. If this is all shit that sounds like tedious crap between monster fights, I wouldn’t go out of my way to naysay you. You want to get together with friends, have a few drinks and enjoy some monster smashing, this touchy feely shit is just gonna get in the way of that. Well shit buddy, that’s all good and well for you, but I’ve been watching these motherfuckers for the better part of a year now, and if Toho wants to sell me a Dead Inside™ Army Lady bonding with an emotionally traumatized yet still somehow cheerful little girl flipping burgers at an army base (???) over sleeping grass (“It moves when you touch it…”) then shit… I’ll take it over another set of poorly conceived alien plans for world domination, you know? Uhhh… Travis, how are your feelz? 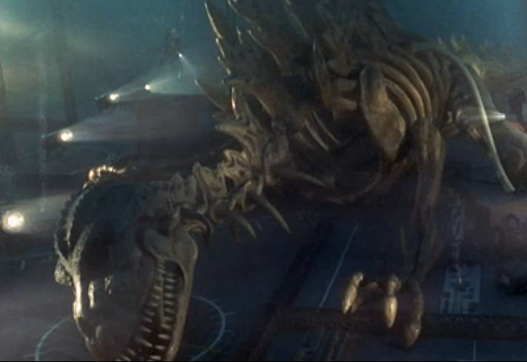 The feelz are good, Luca! “Brevity is the soul of wit,” Shakespeare once said, and he could also be talking about monster movies. GAM clocks in at 88 minutes, shortened from the 100+ minute run times of previous Millennium and Heisei flicks. Looking back on them, it seems like G films tend to outlast their mileage past the one hour and thirty minute mark. Lively fights and somewhat interesting humans are all you need for a serviceable feature, yet attempts to elongate the proceedings with various subplots and happenings for “movie's sake” just weaken the enjoyment. It again feels like Toho trying to fit Godzilla in the modern blockbuster mold. GAM is a refreshing change of pace with G and MechaG (now called Kiryu) making their appearances in the first half hour. We're now twenty six entries into the series, and stretching out the drama simply doesn't work anymore. Just gimme dem kaiju!

Gimme dat Kiryu too! Showa MG has a cool, retro look, and Heisei MG looks slick in chrome, but Kiryu is my favorite iteration of the robo-G. This is the swiftest, most agile version in the franchise, and he kicks a lotta ass. Way speedier than his previous, more stiff designs too! Favorite moment: G is about blast a hospital full of helpless nurses and patients with his atomic breath but Kiryu gives him a FLYING BODY SLAM and sends G airborne. The fact that he's a sentient android imbued with the spirit of the '54 Zilla is a cool, crazy concept too. It almost sounds like an idea straight from Marvel Comics' Silver Age!

Luca, I hope you've made mental peace with the scrambled continuity of Godzilla, because the rebooted timeline of GAM can wrack your brain. Once again, we start over from the death of the original G in GOJIRA with his appearance in GAM being his first since 1954. That's pretty common by now in the Millennium era, but it seems to imply that a few Showa movies are canon. When the Prime Minister is debating how to deal with G, we see flashbacks (aka old footage) of MOTHRA and WAR OF THE GARGANTUAS, laying it out that Japan's had their fair share of monster problems in the decades-long interval between G-sightings. So… what? Is Varan now canon too? Is friggin' SPACE AMOEBA in continuity as well? Let's keep Kiryu around to defend us from the return of Gezora the mutated cuttlefish just to be safe!

Whooaaa Gezora is a real thing... Yeah, I had to LOL when I realized the movie was actually going there. "We developed heat cannons in our fight against Mothra... and high-powered masers in our fight against Big Foot Gayra" the Secretary of Defense solemnly intones, as the movie cuts to old footage from said movies. Nothing so hilarious as straight-faced solemnity intercut with footage of a man in a green sea-weed ape suit wreckin' shit. Doubly so as I have never actually seen WAR OF THE GARGANTUAS (yet) to really make it come out of nowhere. And Showa monsters aren't the only old cameos either! The main actors of G2K (Takehiro Murata) and MEGAGUIRUS (Misato Tanaka) show up in small roles as a confused drunk and terrified nurse, respectively. Tanaka gets to witness the amazing body slam, in fact! How weird would that be to western audiences, huh? I mean, take Batman. They put so much effort into letting the audience know that 2005's BATMAN BEGINS was not a sequel to '98's BATMAN AND ROBIN, and weren't even successful across the board for all their efforts. How many people do you know who thought BEGINS was a prequel to BATMAN '89? A few in my case! To make the Godzilla analogy, this'd be like one year (!) after BEGINS, Warner Brothers makes a wholly new Batman featuring cameos from Christian Bale and Michael Caine as, I dunno, a hobo and a cop, and with some old footage from RETURNS and FOREVER spliced in. People's heads would explode!

Yeah, I've whined about this in the past, but now I just run with it and see how confusing Toho can make it. It's a fun little mini-game while watching these mostly samey movies! Mix it up, mix it up, I always say, and if they don't, I'll find pleasure in other ways. One development that really caught me off guard was Kiryu's "malfunction" in his first fight with G. It's really one of the first instances of my being genuinely taken aback at a plot development in a Godzilla movie. Where were they going to take this??? Unfortunately, besides a cool sequence that ends with perhaps the most beautiful shot I've seen featuring MechaGodzilla, they take it nowhere. They kinda just... fix it without any consequences for the rest of the movie. But for a good ten minutes or so, it looked like GAM was bringing this tired old series to new places!

Yeah Travis, I'll agree. Kiryu is the coolest MechaGodzilla so far, the iteration with the most life in it (literally). No disrespect to the Third Planet of the Black Hole edition and just the teensiest bit of disrespect to the G-Force edition, of course! I'd say I should stop dismissing things beforehand, but it always works out so well in hindsight. You know, one thing's been bugging me about Millennium movies so far is that they all feel the need to let Godzilla get away. Admittedly, in G2K this led to one of the most hilariously tone-deaf endings of all time, but in MEGAGUIRUS (post-credits scene in which the roar is heard and people look up, startled), GMK (revealing G's beating heart at the bottom of Tokyo Bay) and now GAM ("He is retreating! It is a draw!") there's simply no need. Godzilla's been a pretty consistent bad guy in the M-series, so why even bother? It's your own movie, man. No continuity or backdoors needed. “Kill the muthafucka!” as Anthony Hopkins in THE EDGE would say.

That's understandable, Luca, but I think audiences would have a problem with G dying, no matter how much of a bad guy he is. After all, his two definitive on-screen deaths (GOJIRA and GODZILLA VS. DESTOROYAH) were pretty somber, moving moments. Perhaps he's like Freddy Krueger or Jason Vorhees; he's an asshole deserving of punishment, yet you wanna know that he'll be back for more. Speaking of returns, I'll also point out that both Prime Ministers are portrayed by G-film veterans. Current PM Hayato Igarashi is played by Akira Nakao, best known as the strong-headed G-Force leader Takaki Aso during the Heisei era. His retiring predecessor Machiko Tsuge might be familiar to longtime viewers as she's played by Kumi Mizuno. The image of the elder statesman might fool you because she was quite the babelicious sight during the Showa era as Planet Xian’s Miss Namikawa in INVASION OF ASTRO-MONSTER and fetching islander Dayo in EBIRAH.

Since we've been talking about recurring performers throughout this review, let's quickly touch upon why many actors pop up frequently in the G franchise. During the Showa era, Toho had a “new stars” program which took in aspiring thespians and mentored them for potential stardom. Eventually they'd receive film roles (many in kaiju flicks) to see how the public reacted to them, and from then Toho would decide if they fit better as leads or supporting players. This is one of the reasons many recognizable faces will show up time to time in various parts throughout the G series. This shepherding of new talent faded away after many years, but those same Showa players would appear in Heisei and Millennium entries as tributes of where they started their careers.

Next comes something no one would expect in the Millennium series... a direct sequel! That's right! The battle between G and Kiryu marches on with actual continuity in GODZILLA: TOKYO S.O.S.!