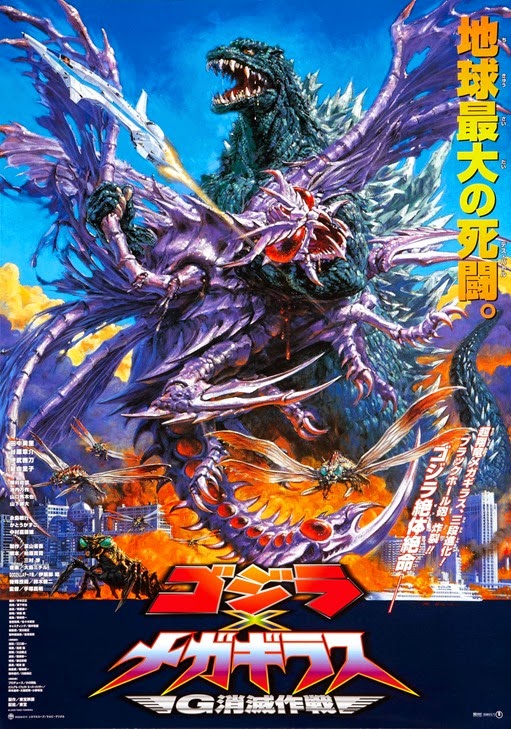 [Before we start off this week’s Kaiju Kavalcade, I’d like to show you all a lovely Godzilla watercolor made by Wholly on The Level friend and ally Doug Slack – visit his Etsy store here!] 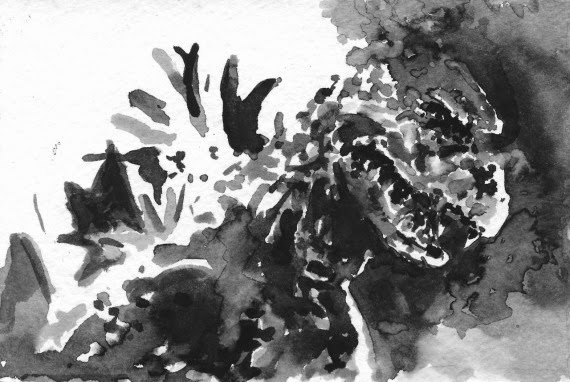 [And now, on to this week’s Kavalcade!]

Well, I was wrong in predicting Megaguirus would be a roided out version of Anguirus, but one thing the big dragonfly beastie has in common with ole Angy is that he provides Godzilla with one of the most exciting fights in the series. GODZILLA VS. MEGAGUIRUS, the second instalment of the Millenium series, starts with old-timey newsreel footage of G’s original attack on Japan in 1954, complete with overly excited newscaster voice. It departs from the original movie in that there is no mention of Serizawa and the Oxygen Destroyer, instead opting to portray Godzilla as just having fucked off back into the sea after his initial Tokyo raid. Interestingly enough, the movie then posits an entire divergent historical timeline for Japan, the capital being moved to Osaka while Tokyo is rebuilt. A 1966 Godzilla attack on Japan’s first nuclear power plant causes the government to look for “clean, sustainable energy sources that will not tempt Godzilla”. Prophetic words indeed for this decade-and-a-half old movie!

Having such an exposition dump at the start of your movie may be lazy screenwriting, but it tickled the continuity nerd in me something fierce. The Oxygen Destroyer at the end of GOJIRA was a weapon of such magnitude and finality that it’s simply insane to me that it never even featured into any of the sequels. The first sequel RAIDS AGAIN in 1955 kind of washes its hands of it by saying this is another Godzilla, while the 1984 and 1999 reboots RETURN and G2K don’t address it at all. The Millennium series’ approach of every movie just being a sequel to the original without interconnected continuity is a wise one, letting every movie just tell its own story. This movie’s anti-Godzilla squad is rather hilariously called G-graspers, a name I have added a hyphen to just now for clarity’s sake. That’s right, all of the human heroes’ uniforms say GGRASPERS in what is clearly a pre-Twitter world that had no worries about hashtag confusion.

The GGRASPERS have devised a new weapon to be used against G, a black hole cannon called Dimensional Tide that oughta suck the big guy into another dimension, new galaxy – intergalactic planetary. Among them is Lt. Kiriko Tsujimori, a former military woman who lost her CO and friend in a previous Godzilla attack in which their squad rather foolishly (but pretty awesomely, I must admit) were deployed against G on foot (!) armed with rocket launchers. She has a score to settle with big G and will stop at nothing to destroy him. I loved this character! She was basically female Maverick who gets assigned to a unit devoted solely to killing the radioactive dinosaur that killed Goose. She’s also the first human in the entire series to friggin’ CLIMB GODZILLA and shoot a tracking device between his fins! Travis, how is the Millennium series treating you so far? 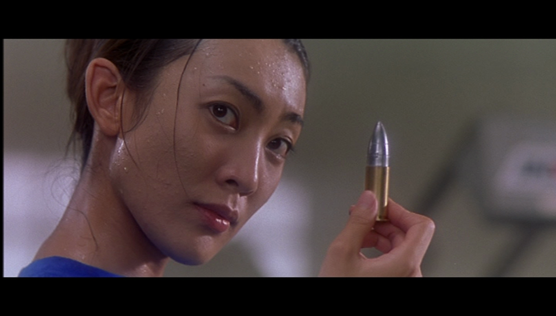 I like MEGAGUIRUS just fine, but I can understand why other fans find it to be a little weak or middling. A large part of this is probably due to the workman-like direction of Masaaki Tezuka (making his helmer debut after years of assistant directing on the Heisei G-films and the REBIRTH OF MOTHRA trilogy). He unfortunately seems to have bad luck with the franchise as this and his later entries (GODZILLA AGAINST MECHAGODZILLA and GODZILLA: TOKYO S.O.S.) had disappointing box office, causing Toho to turn to more kinetic filmmakers like Shogo Tomiyama and Ryuhei Kitamura to re-energize the Millennium era with more outlandish G-flicks. Comparatively, MEGAGUIRUS sticks to the standard kaiju formula pretty well. Now, G2K also stuck to formula, but the eye of Takao Okawara and his great visuals made that film a welcome return after the Sony GINO debacle. Tezuka seems like a nice enough guy, yet his competent work pales in comparison when examining the M-era as a whole.

It already sounds like I'm giving MEGAGUIRUS a bad rep, and I'm not! In fact the human characters make this a nice one to sit through. You already mentioned the awesomeness of Kiriko, and I'll second that motion! In the female department, it's also cool to see G-veteran Yuriko Hoshi (previously seen as photographer Junko in MOTHRA VS. GODZILLA and reporter Naoko in GHIDORAH, THE THREE-HEADED MONSTER) return to the series as Prof. Yoshizawa. I was also fond of Shosuke Tanihara's geeky inventor and his nerd crush on Kiriko. How sweet was it for him to base his software repair program and its avatar likeness after her! Probably the funniest acting moment though comes from Masatoh Eve as the latest evil Lord Business. Yoshizawa is speculating why Godzilla is searching for nuclear power, and since the government imposed ban, there shouldn't be any sources of plasma energy hidden in the city... right? She looks up at Business, suddenly smoking a cigarette with a silent, stone face, shrouded in the dark and tobacco fog. No music cue, but a villainous sting would've been very appropriate!

As for big G himself, I think one of the issues many fans have with MEGAGUIRUS is that he's not very prominent in the first two acts. Of course in act three he gets caught up in all the buggy madness, yet aside from the 1966 opening and Kiriko's G-riding adventure, he's more talked about than shown in the film's first half. I didn't keep a record, but I might even guess that the Megaguirus insects rack up more screen time than Godzilla. When G does show up though, he engages in some fun behavior that recalls his Showa days. My favorite: after being rammed into a building by Megaguirus, he stands back up to get his bearings. He suddenly senses the big dragonfly nearby and quickly does the most wonderful, sped-up double take I've ever seen Godzilla do! Maybe after all these years of victory dances and levitating kicks we've under-appreciated the King of the Monsters as a master of physical comedy. Any other memorable fight moments for you, Luca?

They’ve really been putting their ankles into the fights so far in the Millennium series, with MEGAGUIRUS possibly containing my favorite Godzilla fighting move in ANY of the films so far. After having been stung in the chest and drained of energy by Megaguirus’ tail earlier, Godzilla is downed at one point and he scrambles to get up. Meanwhile, Megaguirus takes a running (flying?) start to finish the job on Big G. Just as G gets to his feet, Megaguirus’ stinger hits him… right in the face! The camera is behind Godzilla’s back, and everything goes quiet. Both monsters are dead still. The camera slowwwwly pans around to Godzilla’s face to reveal… he clamped Megaguirus’ stinger between his jaws – and promptly snaps it the fuck off, to the agonized screeches of the prehistoric dragonfly monster! Fuck yeaarghhhh!

You didn’t mention it, Travis, so lemme take this opportunity to nerd out a bit about Toho lore. The Carboniferous insects that hatch out of the time-displaced egg are called Meganulon. The first appearance of Meganula in the franchise was wayyy back in 1956’s RODAN. The miners that accidentally excavate Rodan’s egg first stumble upon a bunch of these big larvae who proceed to terrorize the small nearby mining town. It’s cool that they’d go for such a deep cut for a new Godzilla adversary, and I feel a small (yet still shameful) amount of pride for spotting the reference! I think the Meganula are indeed more prevalent than G throughout the first two acts, but I didn’t mind as much since it’s not like we haven’t seen tons of Godzilla in all these movies so far. Mix it up is my motto always!

You know, this movie had a strong finish, but I can’t help but sort of agree with its detractors in that it’s a bit too long anyway. Not necessarily because of any lack of Godzilla, but because, after two dozen movies, I’m really starting the feel the limitations on the amount of stories that can be told about giant monsters fighting in all-ages appropriate ways, on a (relatively) low budget and in production cycles that cannot exceed a couple of months. You mentioned the US cut of G2K was a tighter film, with 9 minutes excised from the Japanese running time, and I don’t think that’s too egregious at all. Ever since the Heisei era, Godzilla movies have been hovering around 100-110 minute runtimes, as opposed to the brisk 80 minute (and sometimes less) schlockfests of the Showa era. I really do think that, with few exceptions, these expanded runtimes haven’t served the movies at all. What say you, Travis? 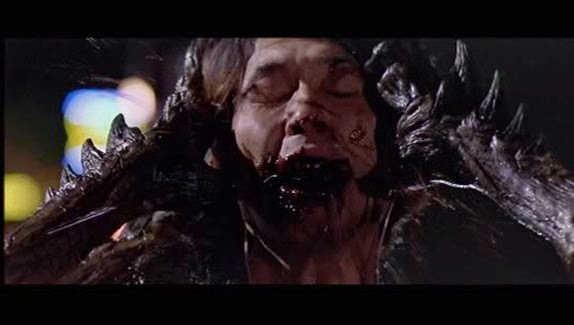 First of all, Luca, way to go for pulling out the Toho trivia with the Meganula/RODAN connection! You've come quite far in your kaiju studies since we started this series. We're almost nearing the end, and you have raised a good point: how many interesting Godzilla stories can you do? Certainly no one complains about the fight scenes, and let's face it, that's truly the appeal of G-flicks. A few critics have even compared kaiju films to softcore porn; essentially a buncha human blah blah filler between the money scenes. With the low budgets and hurried production schedules, that's frankly not a bad comparison!

I think a detriment to the Heisei and Millennium eras compared to the Showa era is the lack of variety with the protagonists. Scientists, reporters, and soldiers are always commonplace, but the Showa movies could focus on people not directly involved with the creature action. The Jun Fukuda entries had teens and bohemians who lead carefree lives until they happened to drop into whatever crazy alien scheme was going on. ALL MONSTERS ATTACK works as a commentary on the franchise as we see the world through the eyes of young, geeky G-fan. In this sense, the Showa movies give us a more rounded or lived-in view of how everyday people deal with everyday monsters. Since the H- and M-era movies were going against modern blockbusters imported from the US, they tend to focus on clean-cut action heroes ready to do battle. By focusing on making Godzilla more realistic for popcorn flick standards, Toho may have accidentally made him a little blander.

MEGAGUIRUS was a financial disappointment, and Toho whipped out that old band-aid of reviving old monsters for the new era. However they decided to really double down their luck and cram in THREE returning foes for the ludicrously titled GODZILLA, MOTHRA & KING GHIDORAH: GIANT MONSTERS ALL-OUT ATTACK! Will you be able to handle all this and a Baragon too?! We'll see!