A lot of things that get labelled “indie” probably shouldn’t. How many people ever actually get to see “independent” movies, made outside of any major studio system, funded by well-meaning, scrappy filmmakers with something to say and the gumption to go out there and say it, by any means necessary? Well, they’d have to be really INTO CINEMA to see a lot of those. For most people, seeing “indie” movies consists of watching movies that do not have explosions in them and are slightly weirder or with a more off-beat central premise than your average romcom.

Marc Forster’s STRANGER THAN FICTION is a perfect example. Handsomely (and commercially) shot, spruced up with some occasional CGI for quirky asides, filled with movie stars looking slightly dowdier than in other movies or simply not doing their usual schtick, it epitomizes faux-indie. Will Ferrell plays tax auditor Harold Crick, a man so embedded in routine he has the route to work planned out to a step. But things have been going oddly for Harold lately, since he has been hearing voices. Not God, or Napoleon, or Pazuzu, but a fancy, authoritative-sounding British lady’s voice who simply narrates his day. This understandably freaks him out, and he goes to seek help. The voice is not simply a figment of his imagination though, as it turns out: it’s actually renowned author Karen Eiffel (Emma Thompson) who is working on her newest masterpiece. There’s only one problem: Eiffel is well-known for killing off her protagonists! After going through a few psychiatrists, Harold hooks up with a wacky professor of literature (Dustin Hoffman) who tries to narrow down genres and authors. What kind of story is he in? How will it end? Once they ascertain he’s in an Eiffel novel, things are looking grim for Harold. He goes to visit the reclusive author, but she will not budge and change the ending. With his death looming in the near future, Harold dispenses with his buttoned down ways, starts eating fanciful cookies and banging Maggie Gyllenhaal. The true sign of an indie protagonist!

While I probably seem cynical and dismissive towards this movie like the FILM HIPSTER that I am, it’s actually never less than pleasant and watchable. The actors have good chemistry and the jokes mostly land, though it’s not really a laugh-out-loud comedy. The conceit of a narrator actually controlling a living person in their own world raises expectations of a movie having something to say about… free will? God? Stories? Maybe I’m just too stupid to get it (and I do like many Paul W.S. Anderson movies, so let’s not count that out) but the ending ultimately seems to reinforce only one message, and not as high-minded a one as you might expect.

After reading Eiffel’s manuscript, Harold agrees that it’s very good and accepts his fate. This perturbs the neurotic author to such an extent that she rewrites his tragic accident into a merely very painful one, and Harold and his new girlfriend get to live happily ever after eating cookies at the 99% bakery. Eiffel’s new book, however, is received as “okay” rather than the literary game-changer it otherwise apparently would have been. From Harold’s POV, the movie seems to say “accept the bad shit and shit will go your way MAYBE”. From Eiffel’s POV, the message seems to be “sometimes it’s okay to shine a little less brightly if it means helping out someone else”. Even if it’s not exactly METATEXTUALLY MINDBLOWING, the latter is a great message. Which is perhaps apt for the movie; approach it as a middle-of-the-road Hollywood tragicomedy and you’ll come away entertained and even quite charmed.

Uhhh… shit, I had my conclusion in the spoiler paragraph. Uhhhh…

I liked Maggie Gyllenhaal’s fake tattoo, which was hilariously covered up in many shots cuz who has the time to put a principal through extensive make-up sessions on a tight shooting schedule! Why isn’t Clarice Starling more of a feminist geek icon? 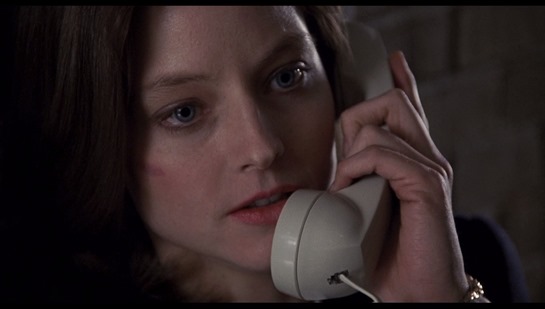 Ellen Ripley. Sarah Connor. Buffy Summers. Xena. Throw out any of these names at any gathering of female geeks, and they will no doubt get hoots and/or hollers varying in decibel strength dependent on the ages of the ladies present. Deservedly so; they are all great, eminently watchable characters in movies and TV shows that dared to posit women as plot drivers and action heroines – fields generally (and lamentably) still reserved for male characters.

During a recent rewatch of THE SILENCE OF THE LAMBS, however, it struck me how explicitly feminist and patriarchy-indicting this movie is. Jodie Foster’s Clarice Starling is constantly working her ass off to excel in her field, only to be met with leers and flirtations everywhere she goes. Although Starling and the film’s main antagonist, serial killer Buffalo Bill, don’t meet until the last ten minutes or so, and her interactions with legendary movie monster Hannibal Lecter (Anthony Hopkins) always have them separated by bars or glass, director Jonathan Demme creates a sense of palpable unease throughout. He frames many dialogue scenes with the interlocutors’ faces in center-screen close-up, making viewers feel uncomfortable, like their personal space is being invaded. Invariably, when Clarice shows up anywhere that has a man or men, she gets sex looks from all sides, and even straight up come-ons several times in the movie – not from perps or suspects, but from the purported professionals she has to work with.* A great exchange between Clarice and her boss Jack Crawford (Scott Glenn) has Starling criticize Crawford for hushing up a local sheriff by telling him “let’s not discuss this in front of a woman.” Crawford reassures her that it was just an act to get him to play along, to which Starling replies that “it matters, sir.” That’s a nice bit of social critiquing in your serial killer movie, movie!

Although her sex sometimes forms a hurdle, Clarice is not completely defined by it. The titular SILENCE OF THE LAMBS reveals a youthful trauma that Hannibal Lecter wishes to tease out of her in exchange for information on Buffalo Bill. Lecter immediately makes guesses in the field of “sodomy” and “fellatio”, but it’s none of that. A male agent could just as easily have made the same confession to Lecter, and shared the same, ungendered motivation as Clarice. Much as I love Ellen Ripley and Sarah Connor, their motivations (hardcore mother instincts, especially in both of their second outings) have become an easy crutch for writers of female genre characters in the decades since. I very much appreciated the dichotomy SILENCE presents: Clarice’s inner world, where she is driven to achieve excellence by a non-gender specific trauma concerning a perceived failure, and her outward reality, where her gender is seemingly the only thing that ever gets noticed or she is judged upon.

Another positive thing I noticed was the film’s (admittedly hilariously heavy-handed**) assurance that, despite Buffalo Bill’s gender-bending proclivities, transpeople are not inherently violent, aberrant or dangerous. A remarkable feat for a 20+ year old movie, I’d say.

Maybe I’m wrong, maybe Clarice Starling has actually been a huge feminist geek icon since 1991, but her fans are as un-flashy/showy as the woman herself. Maybe it’s the less-than-stellar other entries in the Lecter saga, but let’s face it – something being crap has never stopped nerds from putting stuff on pedestals. I certainly hope I am wrong, though – Agent Starling deserves a place in that pantheon among the slayers, warrior princesses, space truckers, and, uh, moms of really important future guys.

In any case, you could all do a lot worse than to rewatch SILENCE OF THE LAMBS. It’s that rarest of beasts: a feminist horror movie, and a damned good one, to boot. 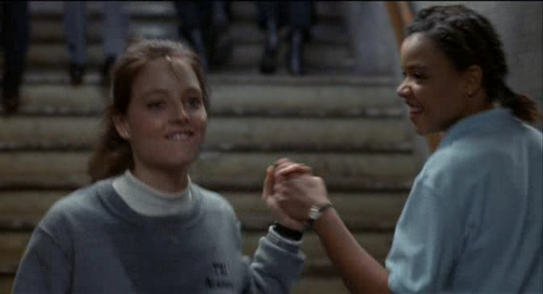 *My favorite/the creepiest was a cross-eyed stuttering entomologist she consults midway through the movie. Having this beta male confidently, almost lustfully gaze straight at the audience is some awkward shit.

**Clarice and Lecter both throw some statistics at each other about gender reassignment clinics, the application process, and studies about non-violence (“passivity” (?)) in transpeople. The entire film is predicated on tense dialogue between these two, but on this topic they are in full agreement. Bit silly if you think about it, but it’s for a good cause so hey.