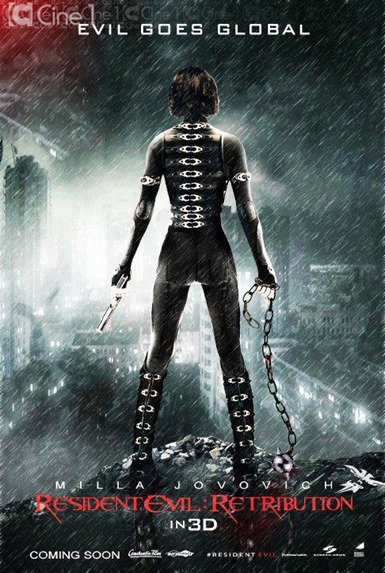 Don’t trust that poster! Evil doesn’t really go global in this movie! It does sorta, I guess, but in that same way that the It’s A Small World ride takes you to Hawaii and the Congo. But more on that later! We start with a good five minutes of Umbrella slaughtering AFTERLIFE’s jammy people, played out in reverse. It’s a really cool scene, actually, helped by tomandandy’s sort of synth-Morricone sounding score. I swear they went to the trouble of composing some sort of theme for Alice, and it’s no shit pretty rousing!

This time they take the effort of actually recapping most of the previous 4 movies (but hilariously omitting most of 2 for reasons), and I couldn’t help but feel a little involvement. I’ve been watching these movies over a week or two and yes, while I’ve mostly been laughing at how silly everything was, the series has gotten under my skin ever so slightly. Everything’s just so straight-facedly dopey I can’t help but like it! After a five minute fake-out scene in which Anderson shows us that he’s a big fan of Zack Snyder’s version of DAWN OF THE DEAD, Alice wakes up in an Umbrella facility. Anderson also liked THX-1138! Jill Valentine interrogates her with the occasional question, followed by loud screechy noises. Alice is in the paper sandwich board again, which is as much a series staple by now as zombie dogs*.

But somebody hacks into the Umbrella security system and gives her a two minute window to escape the interrogation room and put on an S&M suit! When she comes to the control room, all the poor tech guys have been shot (despite previous movies showing us that Umbrella IT guys are very well armed!). This is the fault of one Ada Wong (played by the fantastically named Li Bingbing), who was sent here by her mysterious benefactor. A monitor crackles, and the static recedes to reveal none other than… Albert Wesker!

Explosion-proof Wesker informs Alice that Ada works for him, and he has a strike team coming to extract them both. The Red Queen (you know, that crappily rendered little-girl-shaped AI from the first movie?) has taken over the Umbrella corporation and wants to destroy all human life on Earth! For reasons!

So the movie is basically Alice and Ada meeting up with the extraction team as they journey through Umbrella’s huge VR DOME TESTING FACILITIES. It’s basically a more expensive remake of the first one, but with a lot of simulated environments like Tokyo and Moscow and NY and (lawl) Suburbia. In the Suburbiadome Alice finds deaf little Becky, the daughter of one of her clones in one of many, many zombie outbreak scenarios the Red Queen keeps running even though shit is pretty much past that in the real world. Becky triggers all of Alice’s RIPLEY impulses so when a Tongue Monster from the first movie abducts her, you know she’s gonna go after her!

The extraction team is a bunch of fan service video game guys (Leon S. Kennedy and Barry Burton, the latter played by the incomparable Kevin Durand) + AFTERLIFE survivor Luther Basketball and also two nobodies. If you don’t know which two die first, you are not good at movies! How Wesker got a hold of Luther Basketball or why he’d even bother sending him, I don’t know. But who can really understand the motivations of such a man as Albert Wesker. He’s gone upriver long ago, into that wire-frame model of the night of first ages. We are used to gazing upon the shackled form of a conquered Nemesis, but in Wesker we saw something monstrous and free.

Michelle Rodriguez gets second credit, but it’s such a weird role. She plays two clones, one good, one bad. The good one’s basically a by-stander until she gets randomly killed by Tongue Monster. Bad Michelle is just a mindless henchwoman to Jill Valentine (who herself is a titspider slave of the Red Queen) who ultimately gets infected with LAS PLAGASSSS

Las Plagas is a thing from the games, I know, but it’s barely explained in the movie. It’s little bugs? That make zombies clever enough to use guns and drive vehicles? But it makes living people indestructible? Okay, I guess! PROMETHEUS is so jealous of RESIDENT EVIL, I’ll bet. Why do THEY get to have nonsensical stuff and I get bashed for it! You don’t have nudity, gore and an 80 minute runtime, PROMETHEUS! Now go back to that part of my brain that is designated FORG--

RETRIBUTION is a bit of a letdown because of the absence of a strong (or, well, campy) villain like Wesker or Dr. Isaacs. The Red Queen isn’t interesting enough as a threat, and her underlings are just stormtroopers, even if they’re played by Michelle Rodriguez, Oded Fehr and FASCINATING ACTOR Colin Salmon whom liberal guilt nerds were suggesting as the next Bond for five seconds. I’ll give Jill Valentine this, though, she’s so bad that almost every line is worth a good guffaw. Between her, Ada Wong, and the reverse opening, it’s almost as if Anderson is going for some sort of “retard Kubrick” vibe in terms of emotional distancing. The movie looks so slick and antiseptic that I’m half-convinced Anderson is trying to make a movie that genuinely feels like him mashing action figures together in a big toybox.

The action scenes are pretty much better than ever, and quite varied in content. There’s the boat massacre, a zombie car chase (!), a hallway fight with Alice vs. half the zombified Akihabara district and plenty more. They’re all very exciting and stylishly executed and what-have-you. And, you know, this movie’s cliffhanger had me lawlin’ and pumped to go see the 6th (!) one in theaters. Alice team-up with President Wesker and the Resident Evil All-Stars vs. Zombie Helm’s Deep and also dragons? I’m there!

I hope you enjoyed this journey through the lowest common denominator drivel that is the RESIDENT EVIL series. I certainly have! What about you, have you seen them all? Are you a lifelong fan or would you never stoop to such trash? Are you perhaps a disgruntled CapCom fan who eagerly awaits the day they reboot this son of a bitch with Chris Redfield/Jill Valentine stuck in a mansion in the ARKLAY mountains? Whoa, I thought you guys didn’t exist anymore!

*no zombie dogs in this movie