After a near decade of absence from the director’s chair, Paul W.S. Anderson returns to his baby with RESIDENT EVIL: AFTERLIFE. Expectations were high after the upwards curve that 2 and 3 represented in his absence, so this was pretty exciting! For… probably… this one person blogging about these movies years after the fact. I mean yeah, I was curious. Look, if you’re reading this, so are you probably. What? Screw you, buddy! Let’s talk about the fourth RESIDENT EVIL movie! 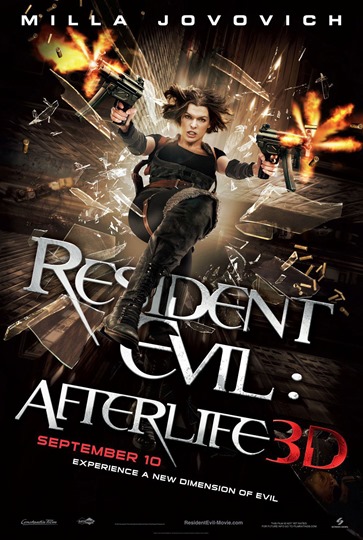 Finally this series got to 3Din’! And if any series deserves that retardation, it’s this one. We pick up right where we left off, with the army of Alices storming Umbrella’s Tokyo HQ. No wait, actually Alice gives us a VO of how the world went to shit because of Umbrella’s T-virus outbreak. That’s all good and well, but I think most audiences not up to speed with RE LORE would more readily accept a post-apolyptic zombie world as a general sci-fi action setting than they’d just say okay to the hundredfold heroine. “Yeah okay there’s a hundred of this chick but WHOA why are there zombies???”

Albert Wesker has been recast! The new guy is absolutely hilarious and I wouldn’t mind seeing Mr. Shawn Roberts in more movies.

When contact starts to break off with different sniper sentries, the Umbrella HQ tech guys start getting worried. They don’t know how worried they should be getting, however! This ain’t just zombies, it’s a shitload of Alices! As the different Alices slaughter Umbrella goons by the dozens whilst throwing shit at the screen, one of the IT guys gets slightly nervous, which causes Wesker to shoot him in the head mid-sentence. Wesker don’t fuck around! He’s a cartoon villain and he wants you to know it! Oh no watch out! An Alice is dropping from the ceiling (the ceiling is super high since it’s one of those HIVE facilities again) so Wesker AND ALL THE DORKY TECH GUYS immediately pull DOUBLE GLOCKS and start blasting. This whole opening ten minutes (!) is quite frankly amazing. Everyone has katanas and machine guns and double glocks and the Alices are just running over the walls and holy shittttttttt

This goes on until Wesker escapes via some sort of weird Umbrella dropship and initiate self-destruct on the facility. But HO! OG Alice is on his ship! Haha! Fuck you, Wesk—ohhhhh he’s injected her with a thing. AACCKKK what did you do Wesker?

“I’ve injected you with an antidote! The T-virus bonded with your blood giving you increased strength… perception… agility… telekinesis… but now…. now you are human again! And now… I shall kill you!””

HONK HONK HONK! Whoops! Wesker, you forgot you were flying a plane and now you are crashing into a mountain! In an utterly hilarious camera-swoopin’ freeze-frame we get to see Wesker in NEAR HORIZONTAL POSITION in the air trying to get at the controls like some insane Wile E. Coyote motherfucker. I half expected some subtitles to pop up under him going all VILLANUS UMBRELLAE WESKERI

SOMEHOW, Alice gets out of this wreck alive and well, and decides to head up north to the mythical ARCADIA where survivors have supposedly set up a commune of the uninfected. She heads to Alaska in a cute little red TinTin plane, keeping a pretty pointless video diary that serves no purpose other than to keep the cheap seats up to date. Which, you know, isn’t too stupid considering this movie’s ICP-lovin’ target audience.

Lemme talk about the music for a second, actually. By getting tomandandy to do the score, there’s a sort of audio-cohesion for the first time in the series. tomandandy get the threatening, industrial droning that Anderson so obviously was looking for in the first movie, but filled it up with SlipKnot and Orbital instead. A good new addition they make!

Once there, she discovers naught but a cemetery for aircraft! There is no village whatsoev—HEYYYY what the hell, feral Claire Redfield! Get off me! Wait… why do you have a metal spider on your tits? You’re coming with me!

So they fly down the West Coast together till they get to LA, where they find some survivors in a prison surrounded by the undead. Figuring what the hell, Alice attempts a risky landing on the roof. She almost makes it, but she’s gonna topple off the side oh n—NOT SO FAST *slo mo black man leap*

She was lucky that one of the survivors was a black basketball player who literally SLAM DUNKS her plane back on to the roof. We’re about twenty minutes into the movie!

They give her a little tour of the premises, introducing the new characters/zombie fodder, with as a special highlight the mysterious CHRIS… played by fascinating Prison Break actor Wentworth Miller. The movie tries to play him off as a shadowy figure of mysterious allegiance by putting him in this sort of Hannibal Lecter cage. But it doesn’t help that his reasons for being in the cage seem perfectly legitimate. Come on movie, you’re not making this guy very threatening by having him deliver reasonable excuses in a growly voice!

It’s not long before burrower zombies with Reaper (the BLADE II kind, not the Mass Effect kind) faces come through the floors* and expose a tunnel system that leads through the sewers. Although the sewers lead out to sea, and the ship ARCADIA (oh yeah it’s a ship lol sorry Alice) is right off the coast, they do not want to take these tunnels! They’d rather take an Urban Pacification Vehicle through the zombie crowd – which is probably not to the liking of THU AXEMAN

Yeah he’s literally just a ten foot hooded guy with a giant home-made maul that APPEARS at the prison gates. Like, he actually just walks up and starts helping the little zombies smash the gates. The T-virus/Alice’s blood had hitherto really been reaching PROMETHEUS levels of retardation/unpredictability, but just having this guy show up with NO explanation whatsoever is really a new level of callous OH LET’S JUST THROW SHIT AT ‘EM Andersonness. Btw that’s Claire in the screenshot fighting him, taking over from depowered (remember?) Alice for a pretty good fight. After she pumps him full of lead, but *gasp* he starts getting up again, however, Alice swoops in and blows his head off. YER GOOD Claire, real good! But as long as Alice is around, ye’ll always be second best, SEE??? This is really a recurring theme of Alice reminding secondary characters that uh-uh-uhhhhh I’m still the biggest badass around here! Since there’s no time to fix the car and zombies are overrunning the building (and the asshole MOVIE PRODUCER stole the plane) they decide to take the tunnels anyway.

When they reach the ARCADIA, Claire’s memory comes back upon seeing the Umbrella logo below deck. Yes… yes… the boat was there… Umbrella goons came and took us… put spiders on all our tits… I managed to escape…

btw Chris is Claire’s brother, but she doesn’t really remember THAT

The EXTREMELY GIGANTIC hold of the ship is full of people cylinders, including our beloved K-Mart. Well, even if you don’t love K-Mart, pretend you do, cuz all the others are literally nobodies in white jumpsuits. Hmmm what… what is going on he--

hmmm yes yes since I ingested the T-virus

(what when did he do that)

I needed human DNA to balance it out

(human dna what? does it do that)

SHOULD you guys be worried at this point that I didn’t mention zombie dogs at any given moment, here they are! Wesker has two zombie dobermanns (that is literally the only race that ever gets infected in these movies) that split open down to their haunch and you’ve got literally half their heads snappin at ya, which is pretty cool.

Also pretty cool: condescending Wesker surviving all the damage Chris, Claire and Alice throw at him to make ever more smug faces! This guy right here!

Anyway, at one point they foolishly think they damaged him enough, so they leave his bullet-riddled body at the foot of his throne and lock the Hollywood producer douchebag in with him. The movie’s only major failure to pander in my opinion is giving the producer guy an off-screen death. Come on, he’s the Horror Movie Asshole! At least show us Wesker biting him in half or something! Wesker goes to the dropship bay (whoa that’s a big boat) and sets off the self-destruct sequence like in Tokyo. But hey what? That beeping is awfully close… Alice you bi--

Wesker, we hardly knew ye! Oh all right, we knew ye well enough, but you were a blast to hang out with! I hope you are even more indestructible than you seemed because the next two movies will be lesser for not having you! Another thing I liked: the self-destruct sequence of Umbrella facilities is literally just a big bomb that is easily movable from its wall slot. I imagine Alice just putting it in the one dropship she knew (?) Wesker would fuck off in, giggling to herself “Ain’t I a stinkuh???”

Ah yes yes, time for Milla, Chris and Claire to settle down and start a maritime colony with these really spaced out white jumpsuit fuckers (and K-Mart) and get to fishin’ for cod and c—what now?

A whole fleet of Umbrella dropships, that’s what! Maannnnn, what are you guys even doing anymore! Your boss is dead! Earth is a zombie wasteland! Put half the effort you put into kung fu and weapons training into agriculture and you’d probably have a hippie paradise in six months!

Series first: the mid-credits stinger! A purple spandex-clad lady tells her Umbrella goons that the woman they are about to meet will give them the fight of their lives… turn to the camera… nobody in the audience has any idea who she is… CONTINUE THE CREDITS

After having looked like so for a few years:

Yup! It’s ole Jill Valentine from APOCALYPSE, ever a slave to visual video game continuity! I mean yeah, I can see that they’d put her in another outfit, but to actually DYE HER HAIR pushes it right over into retardo “oh yeah it’s like that in the game so why the fuck not” territory. Even more hilarious considering that the movie and game stories look pretty much NOTHING alike at this point. Who put that spider on your tits, Jill? Crossing my fingers for a not-dead-at-all Purefoy! Oh who am I kidding, anything will do! Feed me your slop, Anderson!

*Interrupting a planned Milla shower, which makes this the first RE where she keeps it all on!