I guess Paul W.S. Anderson took the complaints about a distinct lack of apocalypse to heart, post RE: APOCALYPSE. Milla gives us a nice VO at the start of EXTINCTION that “Umbrella thought they had contained the T-Virus outbreak… they were wrong.” How did those fuckups at Umbrella EVER get their products into 9 out of 10 American homes? The true evil overlords here are probably Umbrella’s marketing department. Anyway let’s talk about the third entry in the RESIDENT EVIL SAGA 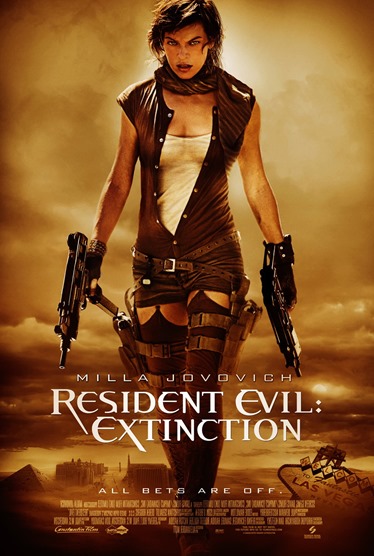 Well, the T-virus certainly did a number on Earth, yessirree! Not only did your basic zombie apocalypse happen, the rivers also dried up, the lands went barren, etc etc. It’s like Anderson was like PFFFFRTTT fuck you! Here’s your apocalypse you whiny bastards!

The movie starts dishearteningly, with what seems like a flashback to the first movie, as Alice wakes up naked on the shower floor.* She stumbles through the well-known RESIDENCE from the first movie (gotta keep that title relevant!) until… GASP!! a booby-trap shoots her in the gut! Hey, there’s Dr. Isaacs from last movie with some stooges! Take blood samples! Clean up this mess! They take an elevator upstairs to a cover-up shack and ditch the body in a whole DITCH O’MILLAS! This shack is surrounded by a tiny chain-link fence, but even more distressingly, by a whole horde o’ zombies.

It’s immediately apparent that this is the first time in three movies where some care went into the zombie make-up. They look like rotted people and skeletons-with-some-bits-still-on-‘em, rather than the “guys in grey make-up” from the earlier movies. Also, no herky jerky whenever they’re in the shot. Thank you, Russell Mulcahy, director of HIGHLANDER!

Which is actually an interesting thing: Mulcahy is the third director in three movies, but Anderson is always listed as writer and producer. And the writing credits aren’t just “based upon characters created by” either, it’s straight up “written by Paul W.S. Anderson”. These aren’t committee written Hollywood pieces of shit… they are HIGHLY PERSONAL pieces of shit! This series is Anderson’s LIFE’S WORK!

The Real Alice is actually driving across the desert wasteland on a motorcycle (BMW) with a little GPS (Vaio) thingy to STAY OFF THU GRID. She left the rest of her band after the second movie because Umbrella’s ability to track her made her a liability. Now she kinda wanders and… does stuff. Scoping out an abandoned gas station, she finds a fly-ridden hanged corpse, but also a notebook! She picks this up cuz driving can get boring. Hey wait, a survivor? The series does its signature “let’s creep up on someone from the back for a jump scare” thing, but the lady is not infected. She wants Milla HELP MAH BEBBEH. Zombie babbly? No, it’s just a plastic doll! Momma turns out to be a cannibal rapist hillbilly matriarch, and her boys jump Alice right away. Alice being Wolverine and Captain America at the same time, there’s no actual danger of rape happening. They try to, but Alice kicks the guy’s face in, after which they throw her in a pit. Disgusting Props for having Momma help hold Alice down, btw! Oh but it ain’t just a pit! It’s a pit with ZOMBIE DOGS lest you forget you’re not actually watching The Hills Have Mad Max. Follows a prettty cool action scene where Alice manages to tie the dogs to a pillar and their mad scrambling brings the house down, turning the erstwhile spectators into dog chow. That was cool!

Cut to a lone zombie munching on a lone corpse on an equally lonesome highway. Then BAM a truck hits him and his brain matter splatters all over the windows of a school bus. INNA GADDA DA VIDDA blares as we are introduced to our human cast, featuring old-timers Carlos and LJ from the second movie. In a why-the-fuck-not nod to the games, the convoy is led by Claire Redfield (Ali Larter), the female playable character in RESIDENT EVIL 2. Although my knowledge of the games is limited, I do know that none of them are set in a post-apocalyptic wasteland, so any “nods” to the games are pretttty much pointless right about now. But heck, it’s Claire Redfield, and why not.

Dr. Isaacs has been using the Alice blood to work on a cure for zombieism. Well, not a cure, exactly, but something to restore basic intelligence and make them docile. At a big board meeting with the Umbrella hot shots, he proposes that while the infected crave flesh, they do not need it for sustenance. They could go on for decades! But if we shoot ‘em up with this, we can tame them and we could live like TRUE 1% KINGS with zombie butlers!

Everyone seems to like this, and they give him the go-ahead. I like that this wasn’t actually Umbrella’s original evil master plan. Isaacs suggests it and everyone’s just all “oh yeah yeah good idea man”, like Anderson is, once again, tacitly admitting that MAYBE Umbrella isn’t the most forward thinking of companies. Guy up above, by the way, is WESKER, Umbrella’s CEO. He’s another hilarious case of NOD 2 THU FANS since he always wears sunglasses like his game counterpart. Because we only see him in a board meeting in an underground facility, so he just looks like a stupid asshole. He’s revealed to be a hologram, so I almost wanted to retract this, but his real location at the end turns out to be just another board room in another underground facility, so…

Alice and Claire’s gang meet up when the former saves the latter from ZOMBIE CROWS by setting them all on fire with her mind powers. A lot of swooping hero Michael Bay shots of Alice proclaiming shit’s bout to get real! Crows pecking people’s faces off! This… this movie is delivering on cheap B-movie thrills! Over a campfire, they all pour over Alice’s notebook where the guy who hanged himself pasted a bunch of flyers about SCENIC ALASKA, and kept a diary in which he seemed to have received radio broadcasts from survivors up north. Radio signals from Alaska to Nevada? Damn, shit IS top notch over there!

As Isaacs’ attempts to capture Milla prove to be problematic, the board decides it’s not worth it anymore and forbids him to keep trying. Crafty Dr. Isaacs, however, samples a bit of Wesker’s voice and preps a strike team on his account. I guess the mercs thought Wesker was amusing himself with a Christopher Walken impression since the sample is REALLY OBVIOUS with long ass pauses. Paraphrased: “I… authorize… a strike… tee… m!” Yeah, this movie won my heart by straddling the fine line between sorta cool and really stupid.

Isaacs and his goons drop a container full of zombies in the convoy’s way, which leads to a pretty exciting post-apocalyptic Las Vegas strip shootout. I dunno why they want zombie butlers, since they seem to have mastered tesseract technology; About 50 zombies run out of that five-by-ten foot container! Before anyone gets their panties in a bunch, the zombies RUN because Isaacs roided ‘em out before unleashing them, so there. Not that anyone who gets his panties in a bunch about running zombies would be with this series till the third installment, but there you go.

Stupid Isaacs gets bitten himself (you coulda just SHOT them all, guy) and makes a break for it back to the facility. Alice gets the brilliant idea that they could use THE HELICOPTER to go to Alaska (b-b-but you’ll still need fuel?), so they decide to break in and steal it. The unfortunately bitten Carlos proposes to ram their truck into the mob of zombies that surround the facility’s fence and blow it up. I’m mentioning this because possibly my favorite shot of the movie is Carlos in the toppled truck’s cab discovering a lone doobie, lighting it up along with the dynamite, and the camera pulling back as the zombies rush the cab while Carlos LOOKS STRAIGHT INTO IT with a sexy “aayyyy guurrrrllll” look before he and all the zombies blow up.

Isaacs, OF COURSE, has injected himself full of Alice serum and is now a monster. But he is a far cooler looking monster than Nemesis! Look! You can totally see Iain Glen in it!

The fact that it’s not a stuntman in a monster suit allows for Isaacs to keep hamming it up as the final boss monster. HAARGGHHH I THOUGHT YOU WERE THE FUTURE ALICE… BUT IT WAS MEEEEE ALL ALONG HAAHRAHHGHHHH

In possibly the best “I’m sorry for earlier crap” move Anderson pulls, the Isaacs monster gets diced by lasers, but this time WE TOTALLY GET TO SEE IT. Thanks, man!

THIS movie’s cliffhanger ending consists of the Umbrella CEOs discussing all contact being lost from the American facility, when they’re suddenly contacted by Alice who puts their asses on notice – she’s comin, bitches! And she’s bringing some friends. A MILLION ALICES is the movie’s final shot, before a cover of “White Rabbit” leads us into the credits because Anderson loves his half-assed Alice’s Adventures In Wonderland references. It’s not Jefferson Airplane, but shit, it’s a step up from SlipKnot in the last one!

EXTINCTION is the first entry I’m dubbing “pretty cool”. This series is making me feel like Lisa Simpson falling in love with Nelson Muntz. Stop worming your way into my heart, you stupid pieces of shit! I’m gonna have to break out the antivirus and I don’t really know how much means “makes you walk again” rather than “grow tentacles”!

*Milla is probably the only beautiful actress that could tweet nude pictures of herself and the whole world would shrug.