I realized recently that there were four or five RESIDENT EVIL movies. In the last decade, there has been a RESIDENT EVIL movie in production at any given moment in time. Doesn’t that kind of blow your mind? Who do you know that is a big fan of the RESIDENT EVIL movies? Do you have a cousin, a sibling, a loved one who awaits with bated breath the release of RESIDENT EVIL: TRAPPER KEEPER DOODLE WORD in 2015? I don’t! But they are out there, or else we wouldn’t keep having these movies just… appear every few years!

And you know what? I haven’t seen any of them. Well okay, I’ve seen 2 and 3, but I was in such altered states that I remember only a comedy pimp and a flock of crows from both of them, respectively. So there we have it: 10+ years of B-movies that I haven’t seen. Fresh territory to explore and… enjoy? Let’s find out with the first movie! 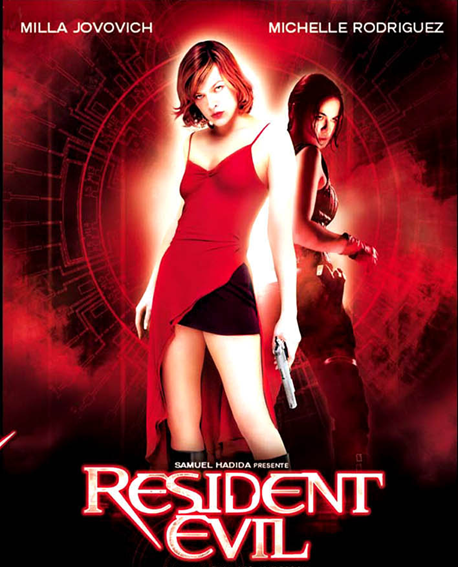 The year is 2002. CGI is hot shit, but not still hot enough that it would be a draw to audiences (like say, THE MASK). Video games were also hot shit, despite their movie adaptations not always being so. THE MATRIX and its retarded bullet-time havin’ brethren definitely were hot shit. So maybe… put those things together? Yeah sure, greenlight that sucker! It really amuses me to think that George Romero, the granddaddy of all zombie movies actually had written a treatment for this movie, only for it to be rejected in favor of the cost-cuttin’ director of MORTAL KOMBAT, Paul W.S. Anderson! Oh, what delicious fanboy agony that must have been!

I’m not the world’s biggest Romero fan, personally, but from the first few minutes, Anderson makes it clear that he’s not making this movie for those with an IQ in the triple digits. The movie starts out with flash cards that are also being narrated by what sounds like a Trailer Voice Guy. TVG tells us that The Umbrella Corporation manufactures everything from software to household appliances, and 9 out of 10 American households have Umbrella products in their homes. BUT… Umbrella also secretly develops military hardware, genetic experiments and viral weaponry… *BAM* RESIDENT EVIL

We see some office people at Umbrella going about their work, when someone futzing with BLUE VIALS and also GREEN VIALS callously throws one to the ground and the whole installation goes into lockdown. People are shut into elevators, locked into labs where they slowly drown from water leaking out of a broken thingy (?)… basically everything goes to shit. It ends with a pretty cool death where a lady tries to crawl out of the elevator she and her coworkers are stuck in, and the elevator suddenly starts dropping down just as her head’s sticking out from between the narrow doors. Just before her neck hits the floor, the elevator stops. But before she can crawl back in, the elevator just WHOOSHES back up and makes her hit the ceiling instead. That’s pretty darkly comedic/original! Also, we don’t actually see the decapitation, but rather we cut to a POV shot until the ceiling coincides with a smash cut to black. Mmmmmaybe that would have been a better title reveal moment?

Anyway, Milla Jovovich wakes up in a manor house somewhere and seems to be either amnesiac or really thankful for all of life’s little mysteries like drawers and chairs. Speaking of MIRACLES: it was around the time that jump-scare-encounterin’ Milla is seized by some sort of special ops team that I realized RESIDENT EVIL is probably a fan-favorite among Juggalos. There’s a lot of aggressive and loud music, there’s hot babez n gunz n shit, blood, monsters, and everything’s nicely spelled out by computer voices should you get lost at any point.

Another hilarious moment comes when the special ops leader (Colin Salmon of JAMES BOND 007 fame) explains that the manor Milla woke up in was a front for the emergency exit to THE HIVE, an Umbrella underground research facility. While he’s explaining the location and functions of THE HIVE, the camera takes us through a CGI model of the facility. The characters are not watching this on a screen, it’s purely a directorial flourish to visualize what Salmon is telling them. When the virtual tour of the facility stops as the camera pulls in close to our group, Salmon finishes with: “We are the red figures on the map.” But nobody’s looking at a screen. They’re all standing around in a hangar. Salmon was… saying this… to explain to the audience… that the red human-shaped thingies on the computer thingy… were the movie’s characters.

Yeah, it’s a movie based on a video game with zombies, but honestly, it felt much more like a SPECIAL OPS vs. ROGUE AI movie. The zombies are just human employees (and dog test subjects) infected with the T-VIRUS from the broken blue vial at the start of the movie. So it’s basically “Really Cheap JURASSIC PARK With Zombies And Techno”. Boy, that techno/metal! There are SOME jump scares for the gentlest among us, I suppose, but Anderson undercuts any tension he might have built up in favor of a soundtrack that’ll make you want to pop happy pills and rob the nearest baby of its pacifier. And it’s not limited to weird soundtrack choices! There’s at least three moments where there appears to be a scene missing. Michelle Rodriguez is swamped by zombies… Michelle Rodriguez is on a high ledge taunting the zombies. Milla and Ugly Betty Guy are having a Plot Revelation Conversation in an empty office… Milla and Some Guy are running towards wherever the hell Michelle and James Purefoy are hidin’ out cuz now zombies are after them! I swear I didn’t fall asleep at any point during this movie!

Now, I don’t really mind stupid at all. COMMANDO and BAD BOYS II are among my favorite movies of all time. But, unfortunately, this movie fails to deliver on the most basic level a stupid B-movie should deliver. The violence just isn’t up to (sorry) snuff. There’s one gleefully cruel scene where the Red Queen AI is fucking with the special ops team in a room of lasers where they all get chopped to bits in different ways. Strangely enough, they are all laser-chopped in a completely bloodless manner. It was like I was watching BREAKING DAWN again here! The final laser kill is diced into tiny little cubes, but we only ever see one side of his head start forming a grid pattern with blood seeping out, after which the camera pans over to a shocked Milla. Afterwards, during scenes set in that room, the camera is even set thusly that we never see that part of the room where the pile o’ special ops cubes are lying.

In an amazing instance of both the movie wanting to be sure everyone is up to speed and the divulging of information to the audience at the wrong time (in this case, far too late), Milla and the group of survivors are told that the best way to kill a zombie is to “sever the spine or severely damage the brain tissue”. To which Michelle Rodriguez helpfully reiterates: “WE GOTTA SHOOT ‘EM IN THE HEAD???”. The mind-blowing information that zombies oughta be shot in the head is brought to you near the hour mark of a 90 minute zombie movie. Yeah, there had been a whole lotta torso-shootin’ and “OMG why aren’t they staying down???” before that. I’m totally aware that this information is only old news to the genre-savvy (but really, that particular information is pretty mainstream) viewer and not so much to the characters, but you really should do away with such a plot point pretty early on in the narrative. The zombie genre was nearly half a century old even then!

Near the end of the film, a big quadruped monster attacks a human villain by jumping on him from the ceiling… after which we cut to Milla looking at security footage of it, where we see the monster… shaking about a bit on top of the guy? Then later when Milla and friends arrive at the scene, he’s just kind of lying in a puddle of blood without any real damage. Since the monster was described to have EVOLVED after sampling human DNA, I assume he carefully took some samples of earwax or something?

Anyway, Milla and her surviving friends fight off the Q-Tip Monster on a speeding train in a fight that is almost sorta cool cuz you can actually see damage being inflicted on the thing, in the intermittent shots where it is a puppet rather than shitty CGI. Ah yes, I almost forgot. In the scenes with zombie dogs, there are actual shots where dogs are used who are dressed up as zombie dogs. This looks amazing cuz they just glued various meat products onto dobermanns, it seems. Kudos to the dog trainers who kept them off of each other!

Milla and infected bro reach the surface where they are promptly quarantined by Umbrella guys. The guy’s so infected his wounds seem to be spoutin’ tentacles, but he’s dragged away as Milla is sedated and blacks out. She wakes up several weeks later since her natural hair color seems to be growing out, only to find RACCOON CITY, the town near the cover manor, completely desolate and empty. Pan out to cityscape, end credits.

I’m honestly kind of baffled as to why this warranted a sequel. I mean yeah, shitty movies make money all the time, but this movie even failed to deliver as an exploitation cheapie. Milla is generous with showing us her skeleton as always, but that can only take one so far. But hell, I promised, and promises are like umbrellas -- the best ones are the ones you smack a raccoon with repeatedly.