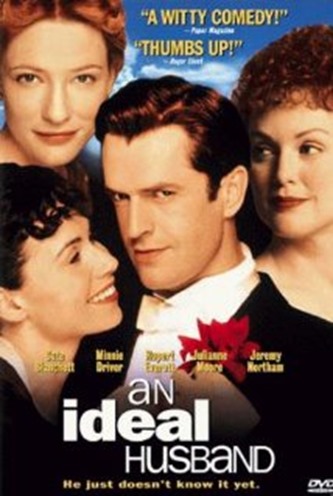 Sometimes a movie just does its job and disappears into the night, not unlike a Victorian frippoon* as portrayed by Rupert Everett in that selfsame movie.

Everett plays Lord Arthur Goring, the titular ideal husband/dandy, whose source of income seems to be professional smugness. His friend Robert (Jeremy Northam) is an MP who is married to Gertrude (Cate Blanchett), a seemingly perfect woman. His sister Mabel (Minnie Driver) is also present. Their world is shaken up by the arrival of Mrs. Chevesley (Julianne Moore), who tries to blackmail Robert into supporting the digging of a canal someplace far off that she’s thrown a lot of money at. What’s she got on Robert? Well shit, he used to be poor and made his money stelling state secrets to a seedy Baron (Jeroen Krabbé). The real crux of the movie is about misunderstandings and the avoidance of public embarrassment. They kinda gloss over the fact that selling state secrets was probably a hangable offense! But I kinda liked that! Here’s a movie about fancy people being witty. One of them committed a capital offense. Shit, that could be EMBARRASSING if it came out! Let’s clumsily trip all over each other and make double entendres until it goes away!

Minnie Driver and Cate Blanchett are really pleasant surprises in this movie. They both register in my brain as “good actresses”, but they were very funny. Especially Blanchett, whose biggest claim to fame is playing ice queens (with or without pointy ears), gets to let loose something fierce in stumbling for words and coming up with lies on the spot, to the point where she might as well have said herpaderp near the finale.

AN IDEAL HUSBAND is an adaptation of the Oscar Wilde play in the tradition of so many a BBC/Miramax/Pathé production, namely “Get good source material. Get good actors. Borrow fancy dresses. Point camera. Shoot.” And hey, it’s good! I’m not gonna begrudge anyone a wealth of good material. This isn’t a fucking Kevin Smith movie where the camera gets plonked down to look at 30 something fast food employees discussing the merits of STAR WARS vs. LORD OF THE RINGS.

It’s a pleasant movie that doesn’t try especially hard, but it doesn’t need to. It gets by. I guess you could say AN IDEAL HUSBAND is what Marvel hoped IRON MAN 2 would be. Oh, and it hilariously ends on a freeze-frame + fade out, followed by a PREDATOR style credit sequence whith all the characters winkin’ and smilin’ at the camera while the actor’s name appears under their face.

RANDOM OBSERVATION: There’s a weird ass scene where Driver and Blanchett seem to be cosplaying as Greek action heroines while conversing about the plot. A special treat for cosplay and randomness enthusiasts out there!

*Thank you, C.S. Lewis, for introducing the word “frippoon” into my life. Here endeth thy worth.