I can’t really recall ever having seen any particular screwball comedy, even though I must have seen quite a few in my childhood years. The screwball comedy pretty much fit my often-home-alone mother’s definition of “a nice movie” to the tee. Black and white, attractive actors, fast-paced light witty banter and a happy ending. What’s not to like! I really enjoyed DOWN WITH LOVE, even with my mere cursory “feel” for what the genre entailed rather than an actual working knowledge of it. This genre being relatively unexplored territory to me, a conscious front-to-back viewing of one of the seminal examples of it was just what I needed. Dames ‘n gents, let’s talk about: 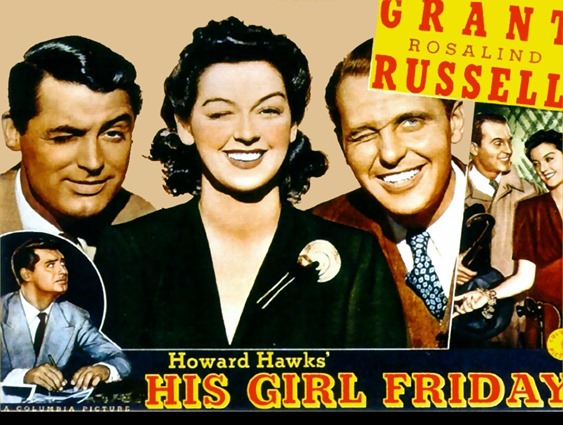 Everybody winking and smiling on that poster isn’t just empty affectation, it’s pretty much what you can expect from the movie. Nobody’s taking it seriously, and nothing is serious. Basically everyone is a big cartoon character crackin’ jokes at 5000mph at all times.

Now before I talk about the movie more, I would like to show you the main menu of a legally purchased and in every way legit DVD: 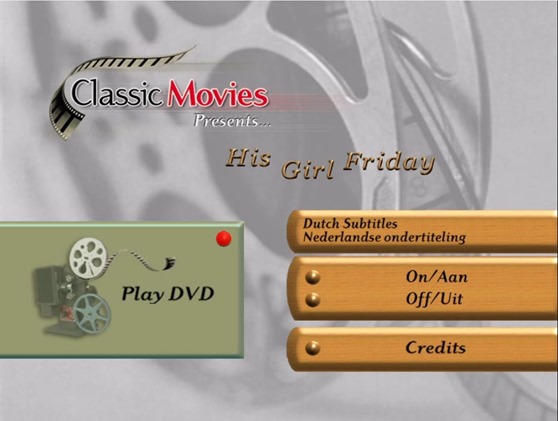 i mean come on

Rosalind Russell plays Hildy Johnson, ex-wife to Cary Grant’s Walter Burns. Hildy is going to marry goody two shoes Bruce Baldwin (Ralph Bellamy) and comes by Burns’ newspaper office to let him know. The career-obsessed Burns was a neglectful husband, but not really in any dramatic way. We learn that they spent their honeymoon in an abandoned coal mine chasin’ leads! “Well I couldn’t have known about the second cave-in!” Burns sheepishly complains. Burns also keeps reminding Hildy of her being an amazing newspaper MAN (?) but Hildy will have none of it! “Bruce makes me feel like a woman!” All this career bullshit is for the birds! She wants to make babies and darn socks! Now this is a valid life choice, of course, but it’s sooort of weird for a 1940 movie to present a career woman, surely a rarity in popular media depiction of the time, who just wants OUT as soon as possible to go be a housewife.

The only other “ooooookay 1940” moment comes when Burns discusses the case of Earl Williams (John Qualen), a man wrongfully convicted of shooting a cop. Why’ve they got him locked up then, if he didn’t do it? “Well, the police officer was colored, and there’s a lot of colored voters in town.” It’s a… a reverse OJ!

Anyway, Burns wants to save Williams from the gallows (!) and needs Hildy to write one of her signature EMOTIONAL PIECES, which he’s sure will grant them a reprieve from the governor. “But Walter, we’re a Democrat paper!” “We’ll be a Democrat paper again after the reprieve!” Never mind unscrupulous, Burns is straight up CRIMINAL at times. He employs a lady of the night, a forger and a straight up gangster to GET THU STORY throughout the movie. You see, Hildy just wants to go to Albany with her new beau to be wed in the morning, but Burns keeps on throwing obstacles in their path, going so far as to have Bruce be incarcerated on false charges several times (planting fake money on him for one!). When he sends his lady of the night to get Bruce locked up on soliciting charges, she asks him who to look out for. “Oh, he looks like that fella in the pictures… Ralph Bellamy!” What a weird metajoke for a movie that old! How delightful!

Look, Cary Grant and Rosalind Russell ARE this movie. They’re just absolutely magnetic. They keep such a rapid-fire pace of wit going that you’d be forgiven to think our grandparents were issued dizziness warnings before entering the cinema like some sort of jocular EXORCIST. Grant makes you like this corrupt son of a bitch completely effortlessly as he keeps smugly insulting everyone without his targets even being aware that they’re being condescended to. Russell is essentially the perfect Lois Lane in a movie that just happens to not feature Superman. Despite her wish for a gender-normative existence (at the start of the movie at least) she never comes across as anything less than a hilarious badass. Bellamy plays the new beau as a big lovable dope who is completely out of his league against Grant’s wiley charms, like Ned Flanders if he were special. I’ll also give big props to John Qualen who plays a cop killer (!) like he’s fucking Droopy Dog and completely comes across as a poor, simple man just caught up in this tornado of wit.

I recently saw the Marx Bros. movies for the first time, and I had a hard time getting into them. They were a sort of movie that doesn’t really exist anymore, essentially an extension of the vaudeville tradition where you’re watching a couple of performers do their bit with the loosest attempt at a plot to tie it together. True, screwball plots are nothing more than an excuse to get the leads bantering, but they exist within a more-or-less set universe. Marx Bros. movies might as well be filmed as stand-up comedy, and that takes a bit of getting used to as a modern viewer. HIS GIRL FRIDAY pretty much lives on in romcoms and sitcoms of today, but I can hardly name actors that are as charismatic and hilarious as Grant and Russell, LET ALONE that they’d lower themselves to doing a romcom.