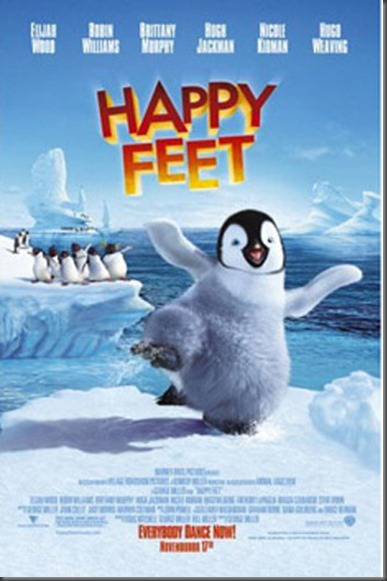 A post-SHREK CGI cartoon full of singing, dancing celebrity-voiced animals? Surely, this must have been the most sure-fire recipe for disaster since I wore my “I hate everyone” sandwich-board and stood on a Harlem street corner for five hours?* Dear reader, you may be as shocked as Snoop Dogg reading Sartre that this movie actually isn’t as bad as it sounds.

Let’s get the bad stuff out of the way first. Despite actually being gorgeously animated, it may not have been the best choice to go for character designs as unstylized as the ones in the film. Penguins don’t really do much but squawk, so their beaks aren’t designed for talking. It looks very strange to have these fairly realistic penguins open their mouths and have human speech come out. It gave me a weird feeling of cheapness in the first few minutes, despite everything actually looking fantastic. The disconnect just makes you think it’s shoddily done!

Okay, next big bad thing. You get Nicole Kidman and Hugh Jackman as Ma ‘n Pa Penguin. Sure. But why have them do Marilyn Monroe and Elvis Presley impersonations? Why spend that money? Surely, George Miller, you could have spent millions of dollars less and just scoured Perth’s karaoke bars for decent imitators? The credits even mention Hugh’s Elvis impersonation was done WITH PERMISSION OF THE PRESLEY ESTATE. That strongly implies they had to pay to just have an Elvis impersonation in the movie! Even more reason not to spend the money on the actor, if you really MUST have an Elvis-sounding character! Hugh and Nic’s characters are great penguin singers, so I’m also kind of iffy as to why mama penguin was “Norma Jean”. I mean, Marilyn isn’t exactly known for being a legendary singer, right? Why not call the mom Aretha and actually get the real Aretha?

Oh, and a final bad thing, although I did not experience it as such; Yes, the film does feature penguins singing famous pop songs and occasionally tap dancing to them. If this sounds like a turn-off, then you will not be swayed by this movie. I’m an easy mark for songs I recognize! And hey, unlike stuff like SHREK where they just burst into song because that is funny because people will recognize the songs and then realize the song was not originally sung by donkeys and ogres, the songs in HAPPY FEET actually have a reason to be in the movie!

You see, penguins apparently have heart-songs; personal songs they carry with them all their lives which they sing during mating season. The penguin whose song makes the perfect duet is their soul mate! Elijah Wood’s character Mumbles is an aberration, though – he cannot sing! But he does have… HAPPY FEET

Feet that go all a-tappa-tappa-tappa apparently are an abomination among emperor penguins, and they offend penguin elder Hugo Weaving grievously! According to him, it is this abomination that offends The Great Guin and has led to the current famine!

So here’s what I liked about the movie: The singing penguins and their strange insistence that tapdancing is heretic never comes across as anything but weird zealotry on their part. Mumbles is treated like a leper and only gets love from his mom and his Adélie-penguin buddies. Even his mom is constantly discouraged from not shunning her son! There is no reason at all for why tapdancing is evil! The camera often pans out INTO SPACE to show how tiny the colony, the pole, the world is. I think it’s a rather elegant way of showing the retarded myopia of the emperor penguins, even as they’re shown to be the unwitting playthings of far larger and, to them, unknowable forces. This isn’t some fantasy Dreamworks style Penguin World. It’s OUR world, and the movie slowly eases you into that fact. Humans are almost Lovecraftian entities! The human element is scary, but never malevolent. It’s just very well done, communicating how a penguin would perceive these creatures and their machines. Just completely alienating and bewildering, not played for laughs or cheap animal abuse drama. The sequence where Mumbles journeys to the human world for a while had me utterly entranced! What the hell was even going to happen? The resolution of the storyline is nicely done, and ties back into exposing the pointlessness of the emperors’ blind zealotry.

All this stuff makes it sound like a super duper metamovie about the state of CGI animal cartoons, while actually delivering a CGI singing animal cartoon. I’m sure that was not the intention whatsoever, but it sure came across as that! Give it a shot, you sure could do a lot worse.

*Bloodz and Cripz are united only in their hatred for misanthropy!