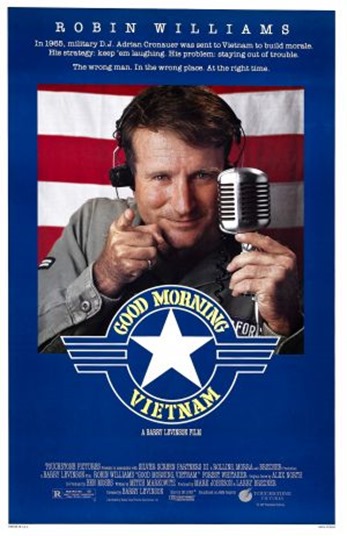 Oh, Robin Williams, you so crazy! I loved MRS. DOUBTFIRE and ALADDIN as a kid! That guy was hilarious! Mork & Mindy too! Doing all the voices and shit? Goddamn! HOOK? Flying around…

But look see, you grow up, and you leave that stuff behind. That stuff is still okay though, cuz kids might discover it and know the joys of that crazy bat from FERNGULLY! His name was Batty, which I just now got!

I’d seen PATCH ADAMS before, which is the only one of Williams’ inspirational movies I’ve actually seen, so GOOD MORNING VIETNAM was sort of a trip to the roots of this notorious sub-sub-subgenre. Williams is USAF DJ Adrian Cronauer, who’s constantly breakin’ the brass’ balls with his filthy BLACK music and IRREVERENT style of humor. He also stalks a pretty Vietnamese girl and makes friends with her brother. Forest Whitaker is a guy who drives him around. Bruno Kirby aka PEETUH CLEMENZA from GODFATHER II is his immediate superior who’s always exasperated with his rebelliousness. Professional asshole J.T. Walsh hates Williams so much that he even obfuscates some intel and sends the man (and poor innocent Whitaker!) into a hot zone without his knowledge! Man, those guys really hate impersonations of flamboyant gay fashion designers!

On the whole, the movie is actually okay. It’s really a comedy drama somewhat based on true events, so if most of the jokes are baby jokes it doesn’t matter, since you can pretty much assume that uneducated 60s guys would find them pretty funny and outrageous anyway. The drama bits are honestly pretty affecting, which isn’t so surprising with a capable cast like the film has. I think dramatic Williams has this sense of vulnerability about him that makes him easily likable, which often gets drowned out in his manic comedy routines. It makes sense, cuz you sorta get the impression that his rapid-fire offend-nobody jokes are just these elaborate cries for love and attention. Awww, Robin! I like ya! Now stop doing Apu!

Naw but for reals, it’s funny in parts. I laughed! Ironically, none of the laughs came from his OUTRAGEOUS radio show. When Clemenza takes over and does a stupid Frenchy impersonation, all of Robin’s friends are outraged and disgusted at this SQUARE taking his place! Yeah, okay, he’s playing polka instead of Martha & the Vandellas, but I actually thought the French guy impersonation pretty much was standard Cronauer material! Forest & the bros should have cut him some slack. He even gets the biggest laugh in the movie! When the general calls him out to explain why the troops’ morale has taken a dive since he took over the show, and Clemenza subsequently has to reinstate Cronauer, he gives a hilariously earnest: “Sir… in my heart… I KNOW I am funny!”

Another scene worth mentioning has Forest Whitaker drive out to pick up Williams in a pho joint to convince him to do the show again. THE BOYS NEED YA ROBIN to which he’s like naaw man nawww the establishment’ll just spit me out I can’t deal with that shit anymore! But gentle Robin is reminded of the divine spark of comedy within himself as they come upon some soldiers in the road ready to ship out to NHA TRANG or some shit and they coax some comedy out of him. It’s hilarious how Williams is all naww naaww guys I can’t OH COME ON MISTUH CRONAUER WE LOVE YER SHOW IT MEANS A LOT TO US oh okay i will

I think Barry Levinson just let Williams riff a bit with the extras, cuz the laughter here is sweetly genuine, and Williams even manages to be funny a few times. The Louis Armstrong scored atrocity montage that follows it works well because of this. You finally get put into the mindset that this guy is popular and is actually helping.

Fun fact! The real Adrian Cronauer is a pretty conservative guy and did not, in fact, use humor in his broadcasts – although the funky music WAS part of his repertoire. The script Cronauer wrote was initially intended to be a M*A*S*H*-style tv show, then a TV movie. The TV movie version reached Williams, and it got retooled to suit his sensibilities more. And how!

So yeah, this was a movie that Ella saw before her disfellowshipment (as they call gettin’ kicked from the religions, apparently – or maybe just the Witnesses) and bought again because of good VHS memories. As opposed to most of her good memories movies, this was one her dad liked. As a former hippie, or so I’ve been told, the movie’s Fuck This Damn War, Man! message was one that spoke to him. It’s funny how, from admittedly biased and anecdotal evidence, Jehovah’s Witnesses do seem to have quite a lot in common with hippies. Peace ‘n Love ideals, staunchly anti-violence stance, they just don’t have the flashy dress sense and free love is replaced by free repression! Otherwise – PEAS IN A POD I tells ya!