Derp Blog Into Darkness #7: THE DAY AFTER TOMORROW 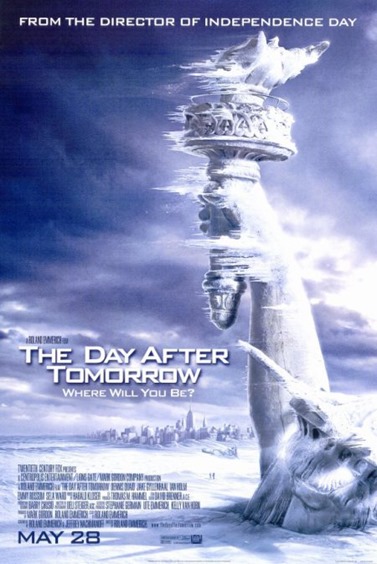 If one were a kindergarten teacher with lil’ Mikey Bay and lil’ Roly Emmerich among their pupils, and one were to ask the children to draw a picture of a dog, the following things would be likely to occur. Mikey would hand in a picture of a crudely drawn penis and kick you in the shins as he ran away laughing, tripping a few times along the way. Roly would stand out by not handing in anything, requiring a search, and being found stuck behind the bookshelf with a half-eaten pot of paste still rolling around next to him. The appropriate respective reactions would be “Ughhhh fucking Mikey (hahaha tho, a penis)” and “Aww come here, Roly.”

THE DAY AFTER TOMORROW is a poopy movie. It has characters that struggle to get to two dimensions, and its PG-13 blockbuster status precludes it from having anything really outrageous happen. It’s remarkable that I found the first half actually far more entertaining than the second, wherein most of the big money shots and action set pieces happen. At one point I noticed the DVD player was at around 40 minutes, which totally astonished me, since I felt like we’d just gotten out of the first act and my mind sort of half expected around 20 minutes to have passed.

What makes the first half so entertaining is that it’s basically a South Park episode but for real, full of “I DON’T THINK YOU APPRECIATE THE GRAVITY OF THE SITUATION MR VICE PRESIDENT” dialogue. There are two hilarious set-up scenes where a NY zookeeper comments on the animals getting so restless. Especially ONE pack of animals… the Bronx Zoo’s extremely rare CGI ICE WARGS!!! The fact that the wolves are the only animals in full CGI should pretty much tip you off that these guys are gonna come back later. There’s a second scene with the zookeeper when New York’s already flooding where he’s checking on the animals and “*gasp* Wh-where d-did… the wolves go??” Honestly, I would have cut out the first wolf intro so as not to betray their full CGI-ness and just have that second, now extra hilarious random scene of a zookeeper wondering where the arctic wolves went in this time of dire climate change.

So yeah, Dennis Quaid is a paleoclimatologist (unlike Tom Hanks’ SYMBOLOGIST, a real profession) who has laid out this model of hardcore climate change over the coming century or so. Only, i-i-it’s happening noowwww! Tornados fuck up LA, a big ass tidal wave hits NY, a hailstorm hits Tokyo with hails duh soizah tenjureens, all that good stuff. There’s a whole set piece with the destruction of LA which is hilarious cuz there is no subplot or any character of import in LA. It really is just destructosploitation! Alright, so maybe there’s some fun to be had as a sort of family-friendly FINAL DESTINATION? Well, besides one reporter getting good ‘n smushed by a billboard, there are no comedy deaths in the movie! There’s even a little set-up where a couple of asshole businessmen take shelter in an off-duty bus by giving the driver $300, but they then just drown like all the other non-asshole New Yorkers outside!

A cartoon JEW YORK LIBRUL is hiding in the same library where Jake Gyllenhaal (Dennis Quaid’s son) and his friends are riding out the storm. At one point, Jake & Co. suggest they burn books for warmth. Liberalo is very upset by this!

“Y-you can’t burn Nietzsche! He was one of the great thinkers of the 19th century!” Haw haw this book lovin’ fag right here!

Cute female liberal that Joe Sixpack in the audience will like better: “He was a chauvinist pig who was in love with his sister!”

Liberalo: “He was not a chauvinist pig!”

Female liberal: “But he WAS in love with his sister!”

Oh, and get this – Liberalo doesn’t even die! Despite loudly proclaiming “I DUN BELIEVE IN GOD”! What are you doing with all these set-ups without payin’ ‘em off, Roly! I mean, even the wolves menace Jake and friends for only about 90 seconds at the end, with quite a few cost-cuttin’ wolf-POV shots thrown in for good measure.

Fun fact! In this disaster movie about climate change, distributed by 20th Century Fox, the characters are getting all their hot (ha ha no pun intended) climate change news from Fox News. It is quite hilarious to see a serious movie about serious things have its characters go on and on about matters of great gravitas and world-shaking importance then blithely tune in to Fox News to see what’s goin’ on in the world. Also quite shameless that Fox released a fucking CLIMATE CHANGE THEMED BLOCKBUSTER considering their own stance on the issue. Eat a dick, Fox!

But, you know, you can’t get mad at this movie. In this day and age, it’s nice to see a big movie just straight-up directly tackle climate change, even if it is a shitty one. It’s like someone punching you in the face, thereby magically saving three kids in Birma from starvation. Knowing that, how you gonna be mad at the guy who punched you? You’d be more like “Awww… aahhh… shh… shit. Okay. Okay. Thanks man. Hey, you mind? I need to take care of this.”

Regarding the topic of this series: I actually had a talk beforehand with my partner Ella about this movie. She saw this movie in the cinema with her mother, and went back to see it with her father. One of the few times he ever went with her to the theater. I’m sure some of you can relate. Personally, my own dad only goes out for movies with Hobbits in them, so before THE HOBBIT, it had been nearly ten years since he’d set foot in a theater.

Me: “So what drew you to theaters for that one?”

E: “It was big and spectacular, and it looked good. And I liked INDEPENDENCE DAY.”

Me: “Did you go see GODZILLA in the theater too, then?”

Considering I was 14 and she was 18 when GODZILLA came out, it’s probably quite logical that a big monster would not have spoken to her. I said that the impersonality of disaster movies kept me at bay. I always felt like an action movie needed a good human(oid) villain for the protagonists to overcome, and weather/natural disasters just didn’t cut it. Ella replied she found an “inhuman” antagonizing force just as interesting, cuz it couldn’t be reasoned with, couldn’t be shot, it could only be endured.

I’d been chewing on that for a few days, and came to perhaps to the first milestone this blog was intended for. Ella is uncomfortable with bad intent, with malice. A sentient villain, one with actual malevolent agency is, I think, to her a “necessary evil” for an action/adventure movie – again, no pun intended. If the opposing force is non-sentient, it is no longer an object to unleash aggression on, but rather a storm to weather together – something for the good guys to rally against and find strength together.

Why did I like “sentient” villains better then? It also put me to thinking about my own choices. Amateur pop psychologist as I am, I decided it was because of the breach of the Social Contract they engendered. Villains and heroes alike are pushed outside of societal norms in narratives, and are therefore these walking embodiments of huge emotions. John McClane is just a poor guy forced to shoot all these douche terrorists, man! Hans Gruber, heh, he’s gonna show all zees stoopid Eff Bee Eye guys what for.

Ella watches action spectacle for a feeling of reassurance, unity. I watch it for catharsis, for vicariously living some outsized (to the point of buffoonish) badassery. This sum DEEP BLOGGIN guys! I’m not kidding when I say that since I’ve started doing this series, I’ve started re-evaluating my own movie watching as well. Who ever said that after THE DAY AFTER TOMORROW?

Hope you’re still entertained with all this soul-searching – next one’s gonna be pretty wacky, or so I prophesy!