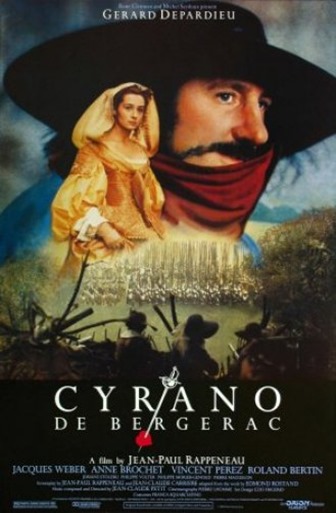 From the sacrilege of BRUCE ALMIGHTY we go to the comfort of 1990’s CYRANO DE BERGERAC. Based on the classic play by Rostand, this Dépardieu vehicle is a respectful, handsome movie adaptation. The costumes are gorgeous, the sets are lavish and the battle scenes are nostalgically mounted with real people charging into each other. For a 135 minute movie, it also moves along at a fairly brisk pace.

The tale is a fairly well-known one; big-nosed Cyrano is in love with his beautiful cousin (haha old timey stories) Roxanne, who in turn only has eyes for sexy Christian. Christian, however, is a dolt, and cannot woo a woman if his life depended on it. In steps poor heart-broken Cyrano who will aid his unwitting rival in conquering the object of his own affections by writing his material for him. The only version of the tale I’d ever seen in its entirety was the 1987 Steve Martin version:

And the only thing I remembered from that was the basic conceit, and a scene where Cyrano makes up 50 different ways of insulting someone with a big nose. Turns out it was a scene straight from the original! I remember finding the Steve Martin version of the 50 insults funnier though, but that’s probably cuz I was about 10 when I saw it. On the other hand, stuff that was funny 200 years ago has more chance of being dated, especially when delivered in a bulk of 50 punchlines at once.

I guess the only thing that I found a pity was that I couldn’t get emotionally involved. Cyrano is a whiny babbly who’s either raging at something, or being sad that Roxanne doesn’t love him. In many ways, he is the original internet commenter! Montfleury is his Robert Pattinson. Get off the stage, U FAG! Christian is, as said earlier, a big dolt. Roxanne is beautiful, and that’s pretty much it. She needs poetry to be wooed to such a ridiculous degree that Christian, once left to his own devices, can count on zero residual affection from her for all the other shit that he’s supposedly written. Another lulzy moment comes when Roxanne declares that her lover’s turns of phrase are so beautiful, she would love him even if… even if he were ugly!!! Truly, a romance for the ages! But it’s acted well by all the principals, and the production is pretty gorgeous, so you can hardly fault the film for its source material.

A twenty-minute battle sequence against the Spaniards is the movie’s high point, and in fact a time where the movie managed to get me emotionally involved THRICE!

Finding out that the movie was nominated for five Academy Awards (and won Costume Design) didn’t surprise me! It’s a nice, well-made movie that wouldn’t offend or shock anyone. My lovely partner told me that she first saw it when she was still a babbly Witness, taped off of TV. She’d watch it a couple times a year, then sought it out on DVD when she was on her own. If I’m not mistaken in my piecing together of evidence gleaned from this experiment so far, I’d say that Jehovah’s Witnesses enjoy movies that are PG-13 maximum, earnest in spirit and pretty to look at. Oscar-bait on condition that it’s not R-rated, basically. Let’s see if this theory holds up with the coming movies, although the next movie is anything but Oscar bait.