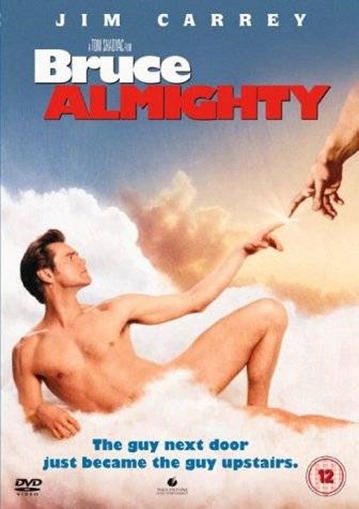 A DERP BLOG first! As I was watching BRUCE ALMIGHTY, I started realizing that I actually had seen it before, but remembered precious little of it. No matter, we’re here, we’re queer, etc. I asked my partner if this movie was one she’d seen when she was still a Witness, or perhaps a FORBIDDEN FRUIT she’d always wanted to see because of its illicit subject matter. Turns out it was one she had been definitely curious about for a while, and caught it on TV after she’d parted from the faith. This movie was explicitly anathema because of a guy having God’s powers, which was trivializing and sacrilegous. Hilariously enough, she had seen the far worse sequel EVAN ALMIGHTY (in the theater!) when she was still a Witness because cosplaying Noah is a-ok in the Kingdom. I’m not gonna leave her out in the cold tho: I’d seen that one too, believing it had to be an improvement over the first, since it had no more Carrey and Carell was the main guy. What? I was a big fan of ANCHORMAN!

BRUCE ALMIGHTY is the tale of Bruce Nolan (Jim Carrey, ho boy is it ever Jim Carrey), a Buffalo reporter unsatisfied with his position in life. He’s stuck reporting on FLUFF, like huge cookies and chili cook-offs. He wants mooooore!

Sign this movie was made in 2003 #1: in the current economic situation (or really, that of the past five years or so) no way would they have made Bruce unhappy with what seems like a fairly cushy job.

When he’s passed over for a promotion to make anchorman in favor of his rival Evan (Steve Carell, making everyone think of and pine for that other movie with Steve Carrell and a news team), he curses God and tells him HE COULD DO A BETTER JOB OF ITTTTT

Sign this movie was made in 2003 #2: Carell is credited lower than Catherine Bell, star of LifeTime powerhouse franchise The Good Witch.

ANYWAY God (the most magical Morgan Freeman of all) takes Bruce up on that offer and grants the down-and-out journalist His powers, while He takes a vacation. Powers are only valid in the greater Buffalo area, though! Will Bruce learn valuable lessons and perhaps humility along the way? I WON’T SPOIL THAT

I’ll admit it, I laughed out loud a few times. There’s a scene where Carrey runs through the house carrying a dog and the dog is peeing straight ahead and there’s just pee going everywhere and god I’m laughing just thinking about it. There’s also a hobo that seems to follow Carrey around with stupid/deep signs; For instance, when shit’s at its lowest and GodCarrey has really been fucking up, he has a sign that says “Thy KingDUMB Come”. Nobody in the whole riot punches him for this! Earlier in the movie, some eses were kicking the shit out of him, so I can only imagine what kinda stupid shit was on his sign at that point.

Unintentional hilarity #1: the PG-13 rating has one of the Latino thugs say a hilariously childish swear word when Bruce confronts them with his newly acquired divine powers. The gangster tells Bruce he’ll apologize “WHEN A MONKEY COMES OUT MY BUTTT". Come on man, “ass” is a PG-13 word! Oh well, making an ese sound like an 8 year old is funny in itself.

Unintentional hilarity #2: the movie ends with a tracking shot rolling in on the hobo’s face as he hilariously morphs into Morgan Freeman.

It’s a mostly inoffensive movie, though I’m not cool with Bruce’s moment of catharsis including the line “You tell me what’s right for me Gooodddddd!”. Otherwise, it’s a fairly liberal Hollywood movie featuring the Big Man. They don’t even mention the Bible or Jesus! Wait a minute, does that mean it’s not the God we all assumed it was??? Did Carrey smuggle a hymn to an Other God into mainstream theaters? And I’ve been slagging this movie off for the last bunch of paragraphs???

Dear reader, I hear the stairs creaking as I type this. A noisome lumbering thing is now fumbling with the doorknob. The nauseating smell of rotten fish fills my nostrils. I hear the sopping wet footsteps coming through the hallway. A hand! A webbed hand has--