CLOCKWISE is going to be the first entry in what I suspect will be quite a few where I discuss a rather popular film that somehow passed me by. Indeed, growing up with my dad a big Fawlty Towers and Monty Python fan, it seems inconceivable that I’d somehow miss this one for my entire childhood. And I have seen A FISH CALLED WANDA, to boot – a far less child-friendly film than this one! 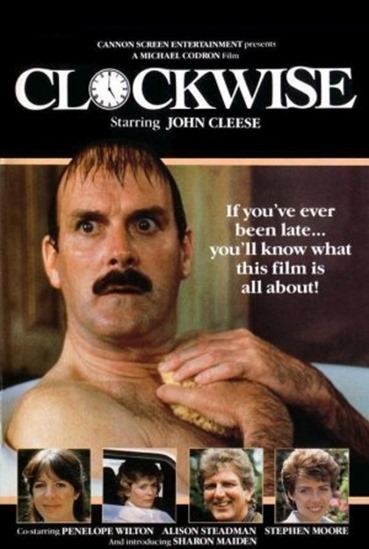 Cleese is headmaster Brian Stimpson, who has been chosen to be the chairman of some sort of important headmasters association. This is a big deal because it’s the first time the headmaster of a public (or, well, non-private… it’s confusing with the terms and the things) school has made chairman. Stimpson is a man of impeccable punctuality and irreproachable conduct. He’s a tightass! We’re introduced to him as he’s monitoring the playground from his office, shaming transgressing students by calling them out by name and telling them “9:20!”

First sign that this film was made in 1986: he has a huge bulletin board and a tiny computer that fits all of 8 characters on every screen with which to make his labyrinthine arrangements.

You know, I was actually assuming Cleese’s character would be Basil Fawlty 2.0, but I was pleasantly surprised that the film took many opportunities to show that Stimpson is a rounded character. Yes, he’s neurotic and rigid, but the kids actually steem to like him. He cracks sarcastic jokes and they laugh. He takes great pride in his working class background, and is extremely enthusiastic for this appointment not just for personal glory, but to help his school and others like it to stand out against THE POSH ONES, as they are so sneeringly called in the film. (“Until we can afford to actually send our kids there”, one character remarks.") There’s even a few references to him having been a slacker as a kid, but without a Hollywood movie’s obligatory “and here’s why I grew up!” revelation scene.

For some arcane reason I still don’t comprehend, the headmaster’s convention doesn’t allow for wives and kids. From the glimpses we see of it at the end, it doesn’t seem like some sort of wild party with strippers and morris dancing, so I’m sort of stumped as to why that is a thing. Is it just a classic British NO LADIES PLZ WE MIGHT THINK OF SEX??? thing? British readers, please comment! His despondent wife leaves him at the train station, where two truant students distract Stimpson momentarily, causing him to board the wrong train and to leave his speech on it as he gets off.

This leads him to get into a car with Laura, one of his students who has a free hour (A STUDY HOUR, as Stimpson is wont to remind us with every utterance of the phrase). Laura has an illicit relationship with Mr. Jolly, the guy in the third square on the poster up there and the school’s music teacher.

Second sign this is a 1986 film: IMDb doesn’t list the actress’ birth date, but the relationship between Laura and Mr. Jolly is rendered fairly inoffensive by the fact that Laura’s big hair and shoulders make her look about 30 (actress on the utmost right of the poster).

Together they’re off, accruing misdemeanors and steadily less petty crimes to get to Norwich on time, followed by Stimpson’s angry wife and the old ladies in her care, Laura’s parents, Mr. Jolly and the cops. Another thing I like, Stimpson is SO repressed, his big freakout moment consists of ineffectually kicking the car, getting bounced back and landing face down in the mud – all without a word. Probably the film’s biggest laugh for me.

Here be spoilers, should you care for such things!

I kinda love that there is absolutely no lesson learned, no big speech at the end that relates the Things He’s Learned On His Journey to his ultimate character goal. He gives a shitty speech in disintegrating clothes, followed by a good sketch where he’s totally the man for the job, as he owns the headmasters as adeptly as he kept the kids in check in the opening assembly scene. And then he just gets hauled the fuck off to jail END CREDITS

A good film! I wish I actually HAD seen it when I was 10, so I’d have fond memories of it, but I think it’d be a pretty fun film to watch with my kids later. Cleese’s physicality is such that he makes you laugh just by walking on those big fucking stilts of his. His “right, yes” expressions ought to crack anyone up at any age!