I won’t be shitting on a romcom. Is there a genre that is more maligned or easier to rip apart as formulaic drivel? Are there fish that migrate to their barrel-based spawning grounds with more regularity? As Grant Morrison once said, there are those writers who feel they are missionaries, and those that feel they are anthropologists. It is my pith helmet I will don rather than my rosary as I descend into darkest Romcomia: 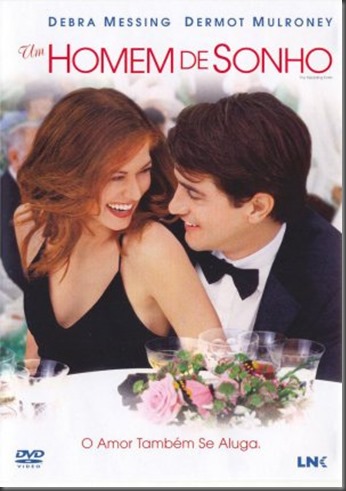 Kat (Debra Messing) is an awkward, neurotic career woman who is dreading her half-sister’s (Amy Adams) UK-set wedding, especially since the best man is her ex-fiancee Jeffrey, who left her at the altar a few years ago. She hires Nick (Dermot Mulroney), a gigolo, to pretend he’s her new therapist boyfriend in order to not seem as pathetically single to her overly judgmental mother and totally self-centered half-sister. UGH amirite ladies???

Luckily she has a sassy chainsmoking friend so the wedding isn’t a complete torture. I don’t remember her name but she does think Nick’s bum is quite edible and she likes smoking cigarettes and is even more single than Kat. The film’s breakout character!

The first fifteen or so minutes spanning the trip from NY to London have Kat tripping and stumbling and schlepping oversized luggage with minutes to spare to get on the plane (which she delays even more to help out her totally pathetic temporary replacement who is just now finding out what a WORKLOAD Kat deals with on a daily basis ugh amirite ladies???). She’s very nervous and makes charmingly awkward slips of the tongue once she meets the apparently quite dashing Nick. I don’t know how prostitutes work besides the basic idea, but I was under the impression that you got to know what they looked like beforehand, right? What if Kat had ordered Ron Jeremy here? Oh well, let’s not look a gift horse in the sexily scarred mouth.

The first laughs I found myself having were after Kat had fallen asleep on the plane, and her hair was all messed up, and she was trying to hide it from Sexy Suave Nick. I’m sure he’s had to escort some far worse looking people than you, Debra-Messing-looking-lady that you are! YES, even with your hair all a-tousle! At this point I was just lolling because yes movie we identify with her already you can stop doing that shit now it is not necessary

Here’s my biggest beef with the movie: Kat is the broadest, most inoffensive character ever. As the sharpest among you probably surmised by now, Nick totally has a change of heart during the movie and OMG falls for his client. The only problem is there’s nothing really there! Yeah, she’s not actively a bitch or anything, but she displays no qualities that put her beyond a perfectly ordinary run-of-the-mill person. There’s no scene where he has a revelation that she’s actually SO MUCH MORE than she lets on to be. To be honest, he had been saying that she was keeping herself down from the moment they met, but that was pretty obvious to anyone with half a brain and three quarters of an eye. If anything, this makes you think about what kind of exploitative sex dungeon nightmare Nick’s life must be if this female Adlai Atkins is his idea of the most beautiful and perfect creature that will make him turn around his life once and for all!

I will give the movie its running time: it’s barely 80 minutes long! When the conflicts were resolved and the wedding could continue as planned (after, of course, the requisite Chase To The Airport), I noted this was either a very short movie or they were gonna drag in some really left-field conflict any moment now. 73 minutes in! I mean, a movie like this is essentially TRANSFORMERS for girls, right? It only exists to tick the right boxes and to pander adequately, so why keep doing it for more than 90 minutes? It felt very old-fashioned to me, like Jack Warner felt he needed an extra PICTCHER FOR THU LADIES to balance out this quarter so go rent me some gowns and see if Kay Francis can be pried away from those dogs for a second!

I hope you guys are enjoying this series as much as I am; Out of three movies I’ve seen so far, I’d only say one was “good”, but they’ve all been very interesting at least!