Merry Christmas to All! (except Robert Zemeckis)

Straight up front: I fucking love Zemeckis’ BEOWULF. I think it’s badass and it’s sad and it’s funny and it’s exciting. I wish it were animated or live-action, but the mo-cap a lot of its detractors hate is counteracted for me by some hilariously hammy performances, a great score, and a neat little twist on the classic story.

Can you guess which movie does not fare so well? 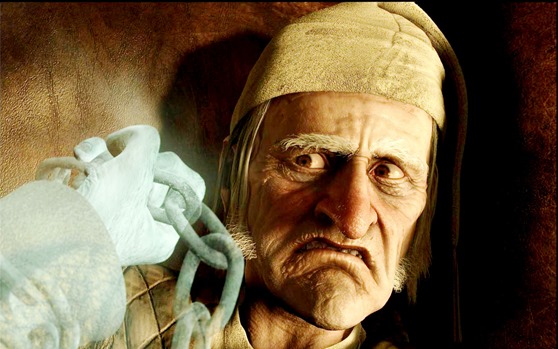 Did I give it away?

In BEOWULF, writers Neil Gaiman* and Roger Avary came up with a clever way of tying the story’s epic poem meanderings into a three act modern blockbuster structure. With A CHRISTMAS CAROL, no such thing is even attempted! Everybody fucking knows this story, and this is the story you’re going to get. It’s as straight an adaptation as you’re bound to get in this day and age.

“Oh man, that’ll be stodgy and turgid! How boring!” is what I hear you say. Well yes, that is true! To an extent! Because you see, even though the creepy mo-cap men are re-enacting a very literal adaptation of Dickens’ classic, Zemeckis DOES spice things up. How?

Yes, with noise and camera movement and 3D stuff poking at the screen. So in one scene you’ve got creepy flesh monster Scrooge delivering 19th century dialogue barely touched up for the screen, while in the next, Zemeckis is taking you on a rollercoaster ride through Victorian London and OOHHHHHOHOHO that cook just threw a pork pie at us and OOHHHH a noisome facsimile of a dog snatched it up right as it was to hit the camera! Bob, you scamp!

The over-the-top performances that (to me) saved BEOWULF are wholly absent here. Great actors like Gary Oldman, Colin Firth and Bob Hoskins are basically acting like they would in a very dignified, very down-to-earth version of CAROL, leaving us all in the neverending horror of their fucking faces. Here is Oldman as a creepy meat midget.

Oldman’s Bob Cratchit is, for some reason, envisioned as a fairly short guy. Shorter than the real Oldman. This only heightens the audience’s idea that something is fucking wrong with Gary Oldman in this movie. And he’s played a little person in a live action movie before this!

And Carrey… oh Carrey, Carrey, Carrey… You know, he’s not even BAD as Scrooge. He’s doing a fairly straight and boring interpretation of the archetypal curmudgeon. He never really mugs or does a riff on his own on-screen persona which, I suppose, is commendable. He can be a pretty good actor in the right parts! He gets to go a little more over the top as the Ghost of Christmas Present, but it’s only appropriate given the crazy nature of the character. In fact, he goes SO over the top he dies laughing and turns into a hysterical skeleton in front of our very eyes! But not before revealing two horrible Gollum children under his skirts who also speed-age into an incarcerated knife-wielding madman and a straightjacketed prostitute!

Which makes you wonder: who the fuck was this movie for? Certainly no young children will stay still for the sleep-inducing dialogue scenes; old people will get a headache from the crazy flying camera and constant barrage of 3D in your face; both of them will be horrified by the scary bits (ghostly Marley’s jaw keeps falling off)… who does that leave? Rational adults?

I say thee nay! They will be watching one of the myriad better variations of this (too) oft told tale.

*Gaiman’s original idea does not really shine through in the finished film. A version of it can be found in his anthology Fragile Things. It’s very, very Gaiman.