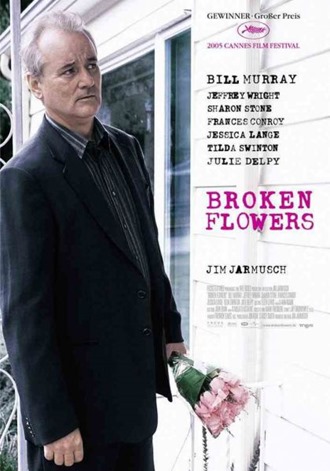 BROKEN FLOWERS is a deeply weird movie. It’s not weird in a David Lynch way where you can’t make heads nor tails of what’s going on on-screen, mind you. The plot is pretty straightforward. Don Johnston (Bill Murray) one day gets a letter from an old flame, saying he has a 19 year old son who is out looking for him. Trouble is, there’s no sender on the letter. Don’s detective story-obsessed neighbor Winston (Jeffrey Wright) is incredibly intrigued by this, and compiles a folder of addresses, phone numbers and even plane tickets to help Don on his way. Don is not too happy about this, but acquiesces pretty quickly without much force from Winston anyway.

The movie is essentially a series of vignettes as he visits the four still-living exes to find out if they are the mysterious letter-writer. Because you literally know nothing about these women, the movie remains intriguing to watch. There’s always something new on the horizon! It’s all pretty well-acted, keeping your interest throughout, even if none of these women have very interesting stories to tell. They’re not boring, per se, they’re just… well, realistic. There’s no outsized ACTING moments, and all the confrontations are pretty low key affairs. The first, a NASCAR widow played by Sharon Stone, has the most MOVIE-like moments with her aptly named daughter Lolita seemingly trying to seduce Don. Murray plays it suitably awkward in moments where she traipses by naked on the phone, but his character is so lethargic and his movements so minimal that it barely registers as humor.

I’d say that would be my major complaint with the movie. There’s “charmingly low key” and there’s “deathly lethargic”. I can buy that Murray’s character once was a true DON JUAN, but those days are seemingly over as the movie starts. He does nothing but watch TV in track suits all day, with his late-period woe-is-me Bill Murray look on his face. He somehow scored Julie Delpy doing this. She only leaves because he is afraid of commitment, and he “treats [her] like a mistress, even though [he] isn’t even married!” Don looks like he might be falling asleep at any time, and needs to be nudged into action by Winston at all times. Credit to Murray for actually selling that Don is slowly getting more involved in his quest, like he actually wants to connect with someone the way Winston and his family do, again without going for BIG ACTING MOMENTS.

Movies like these make me think I need to branch out more often. I get what the movie was going for, and I admire its low key approach, but perhaps it was just too minimalistic? I am reminded of THE LION IN WINTER, another movie where a playboy examines his past relationships – one cut of a wholly different cloth. NOTHING is understated in that movie, and I enjoyed it immensely. Is it my one-track diet of oversized cinema? What is an action scene but an explosion of emotions, of dramatic intentions violently clashing, to drive the plot onwards and change the status quo from one scene to the next?

I watch movies to be entertained, shocked, titillated, (even) educated. I suppose I inherently expect some form of catharsis, be it from a kick-ass climax, a new set of insights, or a lesson learned. I just felt slightly cheated by Don’s ultimate “Live in the moment” revelation, especially since we were never really privy to the fact of him dwelling on the past or worrying about the future. He just seemed a sadsack for no apparent reason! But the final minutes…

Of course, given that the film strongly hints that his “live in the moment” advice is given to a boy who ISN’T his son, who then runs away all freaked out, it’s not entirely inappropriate to think that Don simply hasn’t learned the right lessons from his experiences, and is left in the same emotional limbo he was in at the start. What is this movie trying to say in that case? Is it a 90 minute thesis presentation on Homer Simpson’s old maxim “Never try”? I AM NOT AS GOOD AT MOVIES AS I THINK

It may have been Jarmusch’s intent to leave you as uncertain as Don himself by the time the credits roll, but the movie just doesn’t earn such an ambiguous climax. Not much happens! Did something happen by the end? MAYBE???