Welcome to the first installment of DERP BLOG INTO DARKNESS!

Following other grand Wholly On The Level projects, Blog Into Darkness shall chronicle my journeys into random movies I have never seen, with little rhyme or reason to their inclusion beyond their being acquired by my lovely partner at one point in the not-too-distant past.

“Okay fat chance I’m gonna read some guy reviewing his girlfriend’s DVDs I’m outta here bro!” I already hear you say but WAIT don’t get on that T-16 just yet!

The reasoning behind this series is hinted at in the blog post linked just above. Having shed her deeply religious background in 2006, my partner’s way of living changed enormously – which equally impacted her movie watching and buying habits. Her DVD collection grew substantially in the following years, coming to comprise “safety viewing” (most every CGI cartoon released in the latter 00s) and PROFANE R-rated demonic stuff she would never have dared watch even five years before (stuff in the vein of CONSTANTINE and NIGHTWATCH).

When we moved in together, and we were sorting DVDs, I noticed how incredibly eclectic her collection was, reflecting different moods and eras of her life. And to top it off, I hadn’t actually seen quite a few of them! Always curious to seek out new things, I decided to sift through the heap and write a bit about each as I discover them. They might be hidden gems, they might be utter shit – you never know until you watch them. Oh won’t you join me on my first foray… INTO DARKNESS 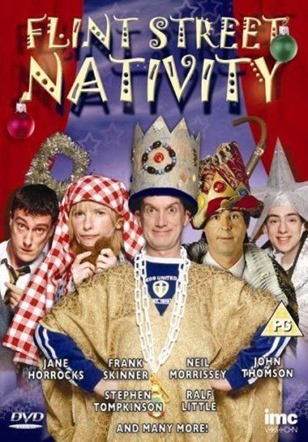 Based on this cover, I’d have told you FLINT STREET NATIVITY is a wacky British comedy about an exceptionally substandard yet charmingly over-eager troupe of amateur actors trying to put on a Nativity play. This is not entirely off-base, but let me tell you that the first few minutes threw me the FUCK off.

It starts with shots of a jungle (?), with earth-shaking rumbles announcing the imminent arrival of some horrible beast. The camera then slowly pans to reveal a little baby Jesus doll lying in the underbrush. The monster is revealed to be an atomic age B-movie giant lizard, brought to life by sub-Hercules: The Legendary Journey level CGI.

The whole scene is disrupted by another, far more terrifying monster: primary school teacher Mrs. Humphries, towering over a class of terrified kids, demanding to know who threw the baby Jesus into the iguana vivarium. Mrs. Humphries is never actually in the picture, existing in the movie as a disembodied voice from a bird’s eye POV camera.

It took me a few seconds to realize that this classroom was suspiciously free of any actual children – in fact, there were none! FLINT STREET NATIVITY was a… a reverse BUGSY SIEGEL! I was dreading the remainder of the film once this dawned on me, but luckily my fears were unfounded. I mean, I may have been rightfully alarmed if this were a Hollywood movie, but the high-concept idea of adults playing kids in oversized sets soon gets swept away for a surprisingly mean (yet still PG) film about what amounts to office rivalries. But with slapstick and pee and puke! It’s essentially a workplace comedy, with the workplace being a primary school. Especially Dervla Kirwan’s (that name!) character gave me the impression that she pretty much could have come out of a grown-up setting.

The guy in the center of the DVD cover (played by Frank Skinner) was probably the most lulzworthy of all, doing a football-obsessed kid flawlessly, complete with imitations of sportscasters without entirely knowing what those old guys are actually saying. Best gag of the movie comes from him as Herod on stage threatening the wise men while retreating back to his throne. He steps on the Herod-robe but he is DETERMINED to keep hitting his mark knowing full well what’ll happen, so you see the robe getting shorter and shorter with each step, until the hilariously inevitable occurs.

A very pleasant surprise was Mark Addy, probably best known to international audiences as either King Robert Baratheon on Game of Thrones or Heath Ledger’s fat buddy in A KNIGHT’S TALE. He plays the class Ralph Wiggum, spending most of the movie in a cardboard donkey mask like some sort of special ed Nick Bottom. There’s a moment where he goes to talk to a crying kid outside who’s been bullied for having a lisp and called a retard. It’s here where Addy’s character is revealed to be one of the special ed kids and, most refreshingly, there’s no grand revelation or tearful admissions. Addy just says something to the extent of “hey well I’m one of those kids it’s not so bad”, which actually DOESN’T make the bullied kid have a change of heart, nor does his refusal to re-evaluate his situation make Addy cry or anything. It’s very down to earth in a most touching way. That scene actually made me think Addy doesn’t get enough high profile work. I hope his stint on Thrones will help that somewhat.

The movie ends with the parents (played by the corresponding actors in non-oversized sets) chit-chatting over mulled wine about their kids’ performances. I’m of two minds on that ending, since it does sort of hit easy clichés the movie had been avoiding till that point (the insecure Indian girl has a domineering matriarch mother; the princess has a slut mom; the weird psycho booger eater comes from clueless-if-well-meaning white trash) but the thing is… I’ve seen it happen. Anecdotal, yes, but I can’t entirely rule out the screenwriter having actually been to PTA meetings such as these and drawing conclusions.

1.) Do you want Helena Bonham Carter in your movie but you don’t have the budget for her? Dervla Kirwan will suit your quirky evil needs just as well at a fraction of the price!

2.) For shame, Peter Jackson! Casting Evangeline Lilly as a made-up* elf in THE HOBBIT when Jane Horrocks exists!

My first BLOG INTO DARKNESS was a pleasant excursion into lands I probably would not have quickly ventured to because of a dearth of explosions. Will further journeys yield equally pleasant or MORE HARROWING results? I hope the former for myself, and the latter for you, dear reader!

*As opposed to all the mercilessly realistic, grimly documentarian Ken Loach style elves in the other movies.