Strong Style Jones & The Battle of the Moons is… a thing

I want to preface this blog post by stating I am friends with the entire three man team behind Strong Style Jones. Seeing as how I’m friends with most of the people who follow this blog too, that probably doesn’t have much meaning, but since I am an honorable man who makes Ned Stark look like Blair Waldorf I thought I’d mention it. 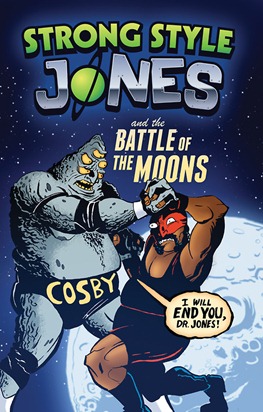 You may have seen some questionable shit on this blog that would fly in the face of accepted good taste. There was the time I wrote positively about Gossip Girl, the time I sort-of defended Twilight, and the time I made damn sure everyone knew COBRA was cooler than DRIVE. Today I come to praise a comic about space wrestling, butts and poops. So if you’re still following this blog after all the aforementioned disasters – pull up a chair and let’s talk about space poop!

Strong Style Jones tells the story of a delusional washed up space wrestler who, after having to throw his final match, wanders the galaxy in a drunken haze looking for fights. In BATTLE OF THE MOONS, Strong Style Jones seemingly bites off more than he can chew as he takes on the multi-eyed and inexplicably German alien wrestler Herr Bill Cosby. I can’t really tell you much more than that, since this is literally the entire plot of the comic, and it would be a crime to spoil any of the outlandish sight gags that make SSJ such a greasy delight to read. The humor varies from downright Cronenbergian farce to deadpan reaction shots followed by often perfect blue-collar bon mots, with a few knowing send-ups of comic traditions along the way. The final page is not only marvelous in its grossness, it’s also a pitch-perfect parody of the lone brooding hero standing victorious over his beaten foe (think characters like Wolverine and Batman). But the universe of SSJ does not allow for glory, merely the good fortune of embarrassing yourself less than the other guy.

I’d be remiss not to point out the clarity of the narrative and panel lay-out structures. In many mainstream comics nowadays, there’s a sense of overproduction where battle scenes are indecipherable messes of lines and motion blur. While SSJ features often chaotic battle, it’s extremely easy to follow even in its heightened state of near-constant adrenaline overdose.

The book’s madcap energy brings to mind the nuttiness of early Teenage Mutant Ninja Turtles comics where anything could (and would) happen with little rhyme or reason besides the fact that Eastman and Laird thought it would be cool. I wonder if thirty years from now Strong Style Jones fans on the holonet are going to clamor for a return to the “original, darker” interpretation of SSJ after the sanitized cartoon version became its more popular incarnation. I’m pretty sure its creator would say “naw man its about butts.”

Were I not relatively familiar with the creators, I’d say there was interesting social commentary being made, but that is probably my European view on these things. Wrestling (as in the WWE, WCW, etc. American style wrestling) is an incredible niche thing here. I remember it being on Belgian mainstream television for about a year, maybe two, only to become the butt (haha) of a cultural joke and disappear again after the “outrage” died down. In that respect, it was pretty much like Jerry Springer, a show that also found short-lived infamy on Belgian television. Personally, I find American wrestling very intriguing and amusing, if only for the INSANE pageantry that surrounds it. It’s something that is essentially acknowledged to be fake and caters to the lowest common denominator of the lower classes. It’s 8 year olds putting up mock fights to see whether the Hulk or Superman would win, only the different wrestling leagues (?) make up their own colorful characters for licensing purposes with built-in hype and brand them heroes or villains(/heels) as the masses demand it. SSJ takes this geek aspect of wrestling to its ultimate extreme, by setting it in a sci-fi universe with aliens and robots, literally making the contestants super-powered beings.

Delusional drunkards fighting insane grotesques over meaningless trophies and accolades, sometimes even actively impeding good work to be done (in SSJ #1) – it’s hard not to see a pretty damning critique of the state of geekdom in 2012. But again, I’m pulling some serious “death of the author” shit outta my ass here, cuz, you know, “iss bout butts.”

If you do not fear the scatological, there’s a lot to enjoy here. It is an extremely well-done comic about extremely puerile things. If you got Michael Mann to shoot an episode of Jackass, this might be what you’d get.

Buy Strong Style Jones and Battle of the Moons, if you dare!