Har har, that’s how you bait an internet audience. 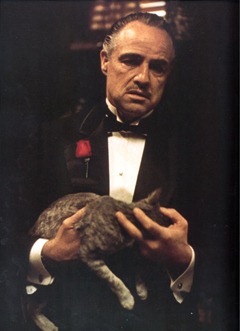 THE GODFATHER is one of those movies that’s in many people’s “Best Of All Time” lists. Or at least, the ones who care to have such things. The first two installments of the trilogy are consistently near the top on IMDB’s top 100 movies page, duking it out with THE SHAWSHANK REDEMPTION.

What’s amazing to me is that it isn’t just a critical darling, it was a huge box office success as well. Adjusted for inflation, the first movie made more money than any single HARRY POTTER or LORD OF THE RINGS. It also deftly beat out both THE AVENGERS and the DARK KNIGHT movies. Notice a disparity there? Now, I love both kinds of movies equally, but it’s a damned shame Hollywood doesn’t push the GODFATHER-kind anymore. It’s a blockbuster that mostly just has people talking, is set in the “real world” without any fantasy elements or big special effects*.

I don’t wanna make this post about THEY DON’T MAKE EM LIKE THEY USED TO ANYMURRR, since I think “nostalgic fondness” is pretty much on par with “guilty pleasure.” If whatever piece of art has the sole redeeming quality of being experienced by you at a young age, then it’s not worth much to begin with. I think early 90s Simpsons episodes are still great; not so much Thundercats.

10 Things I LEARNed upon revisiting the series as an adult:

The (first two) GODFATHER movies represent expertly crafted mainstream entertainment for adults. They’re seen as “good” and “classic” movies, but they are far from stuffy or inaccessible. I don’t think Hollywood will ever return to the model where movies like this are pimped as blockbusters – just check on all the other movies that outrank it on the adjusted all-time list – but consider this post a friendly reminder of how wonderful these movies are, and how easy to get into.

So yes, fuck STAR WARS for making blockbusters all about safe, family-friendly four quadrant Hero’s Journey pictures. I know JAWS is equally to blame for this, but I coudln’t bring myself to write “fuck JAWS.” The GODFATHER films would never lend themselves to such crass moneti—

*Give or take a fake horse-head and a bunch of squibs.