I wish PROMETHEUS had never been made.

Guillermo del Toro recently said that, with the release of PROMETHEUS, it was pretty much certain that his H.P. Lovecraft adaptation AT THE MOUNTAINS OF MADNESS would never see the light of day. 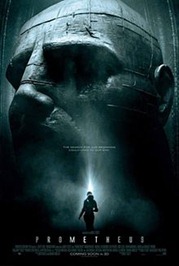 While it’s easy to spot the superficial likeness in plot between the two (research team goes to remote location, finds out about horrifying origins of mankind), one thing is for sure. Del Toro would have put a shitload more care in his movie. If you can count on that spicy Latino for one thing, it’s that he makes sure the world of the film makes sense, even if it’s populated by fairies and ghosts and vampires and hellboys. In PROMETHEUS, barely anything makes sense.

Spoilers follow. If you’re hit in the face with facehugger acid blood, you turn into a contortionist Harvey Dent Spider-Man zombie and Stringer Bell will have to burn you, shoot you and run you over. That sounds very awesome and it kinda is, if that were a standalone sequence. But it’s part of a two hour movie with a narrative and everything.

If you have sex with a guy who drank champagne that got spiked with goo that was just lying around a Space Jockey ship, he will skeet a giant ass facehugger into you. Like, man-size. It’s actually kinda comical. Oh, and if the comically oversized novelty facehugger totally envelops an eight foot spacejockey, a midget alien pops out. Seriously, it’s like a little goblin! Spoilers end!

The movie starts with gorgeous location photography. Really stunning stuff, and the 3D is worth the price for this alone. Then it’s revealed there’s an alien ship hovering over the landscape, with a hooded figure approaching it. The figure reveals his face and he is a weird cross between Dr. Manhattan and Voldemort. He drinks a black goo that attacks his very DNA, and tosses himself off a waterfall as he desintegrates. Cut to titles.

What did this dramatic, cryptic prologue mean? I don’t know! Maybe you can tell me? The film simply does not answer that. Was the planet Earth? Was it LV-223, the destination of the Prometheus’ expedition? Who knows!

We’re shown Drs. Elizabeth Shaw (Noomi Rapace) and Charlie Holloway (Logan Marshall-Green, seriously not Tom Hardy, I swear) digging up ancient murals that TOTALLY prove ancient man had contact with aliens. This is a very fresh and original theory, so Weyland Co., eager to keep its title as dumbest corporation in movie history, immediately funds it with a trillion dollars.

For two years, Shaw and Holloway are underway to LV-223, with android David (Fassbender, without question the best part of the movie) keeping shit running while the crew is in cryo. Once there, they’re defrosted and are holo-briefed by a now-deceased Peter Weyland (Guy Pearce in SUPER HILARIOUS old man make-up). Charlize Theron and Idris Elba (the second best thing about the movie) are also there. They have sex at one point because the two most attractive people in any setting will naturally gravitate towards each other. Exploration happens, but nobody really finds out anything.

The best parts of the movie are when David is full of wonder about life, the universe and everything. There’s a gorgeous sequence of him finding a Space Jockey starmap that’s filled with beautiful 3D, animation, music and Fassbender finding just the right expressions of controlled/restrained awe. He’s even a joy to watch going about his daily business while the crew’s in cryo.

There’s also two good suspense/action scenes: Noomi performing some emergency surgery on herself, and Idris vs. the contortionist zombie. But that’s pretty much exactly what they are. Good scenes without context. They make very little sense in a larger framework.

There’s your movie in a nutshell pretty much: competently made/shot, poorly thought out.

Pearce is in a secret cryo pod, to “meet his maker” before he dies. I was expecting this would lead to something. Maybe he’d get rejuvenated by Space Jockey DNA or something, but he’d go nuts and the remainder of the crew’d have to fight him/stop him from reaching Earth. But nope, it didn’t really lead to anything. Why would you even GET Guy Pearce to have him play an old man? Can’t you just hire an old man? When David and Pearce’s nurses/bodyguards get to the ONE LIVING SPACE JOCKEY pod, I was pretty much expecting some answers (not the least of which about the prologue which still didn’t make sense, and we were in the third act by now), but nope! He just starts punching people!