The Decline and Fall of the Roman Empire: Mad Men, v.3

The myth of America: that simple, honest men born of her great plains and woods and skies have made a nation of her, and will prove worthy of her when the time is right.

Under harsh light it is false. But a good myth to live up to, all the same. 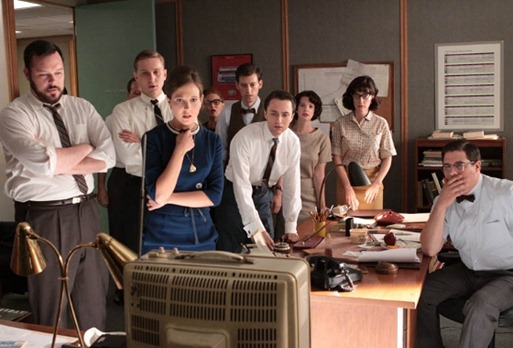 I’ll admit it. I was wrong. I was wrong for trying to make out whether or not Don Draper was an asshole or a cool guy. YOU AIN’T SEEN HALF OF IT, indeed!

The third season of Mad Men is all about growing up. About kids who come to realize that their parents are fallible. On the most personal level, Sally Draper had grampa Gene pass away and then later both Bobby and her were confronted with Don and Betty’s divorce. In the greater scheme of things, well, it’s 1963. Take a look at the picture up there. They’re not watching a Mets game. The great disillusionment has begun.

It was funny (not in a ha-ha way, but you know what I mean) watching the JFK episode from a Belgian point of view. Our monarchy was instated in 1831 when our government invited some German nobleman to be our first king. There’s not that supremely American (and I imagine pre-Vietnam, pre-Watergate) ideal that The President is the guy who pulled himself up by his bootstraps to become The Numba One Representative Of The Nation. To most Belgians (and not even really radical ones), the king is just a guy we have to pay for.

There is a great risk of sounding patronizing here, which I don’t really want to do, but by the time I got to season three’s penultimate episode and It Happened… I felt so sorry for all of these characters for having their collective parents split up. MLK’s assassination and Vietnam alone are going to make sure it’ll be an ugly divorce. I felt sorry for America having to turn into Europe.

Now, I realize that Mad Men is all about showing that America’s Golden Years weren’t all dat but for a privileged elite, but Civil Rights would have come anyway. Vietnam wasn’t like the Civil War (and if you open a book, the Civil War wasn’t really much like “the Civil War” either) where something like abolition happened. It was just Mom and Dad fucking up all around.

Which brings us to Don and Betty, of course. In a cruel twist of irony, Betty ultimately left Don not for his myriad philanderings (his latest one actually spurred on by fatherly Conrad Hilton’s disappointment in him), but because she found a man that fit the daddy archetype better. Hoo boy, nobody can accuse this show of being subtle, huh?

I hear a lot of anti-Betty murmurings (even if I try to stay spoiler-free) on the interwebs. She definitely has her bad sides – vanity, self-centeredness, shallowness… but nobody’s a saint on Mad Men. Betty’s bad luck is just not being “evil” in a FUN way, like Roger. That guy’s a piece of shit most of the time but who cares? He’s hilarious! Additionally, Betty is kind of a princess forced into the role of housewife, and princesses are usually hated by either those who can’t have them or those who can’t be them. I’m looking forward to eating these words next season once more!

I still hope the kids end up at Don’s. Nobody really knows what makes Betty happy, but I’m pretty sure that, again in a shocking parallel with Rusty Venture, it ain’t them kids. Oh man, and Sal being fired for being one of YOU PEOPLE >:[ and that poor German nanny having to take Pete’s peter for helping her out cuz no way was she getting out of that one with her reputation intact.

It’s enough to get you to drink.

But hey, this show ain’t all doom ‘n gloom!

He’ll never golf again! But I will! See you next time, when I’ll pitch ya the (for now) last season of this donnybrook of a show called Mad Men! Very well! Happy Christmas!