The Passion Of The Magneto

It’s easy to take snipes at THE PASSION OF THE CHRIST nowadays. Nearly a decade after its release, it has safely receded from public consciousness as anything but “that crazy zombie Jesus movie”. But back in 2004, it was a phenomenon nonetheless, so it was hard for me not to immediately see the similarities of PASSION and HUNGER. 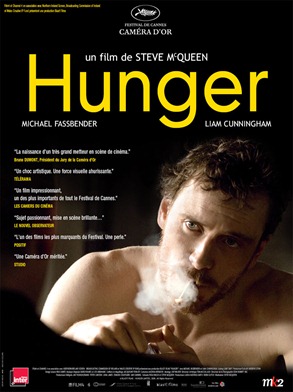 Okay, I say “similarities”, but it’s essentially just the most basic plot framework of a man who meets his fate in service of what he believes in. In Bobby Sands’ (Michael Fassbender) case, it is the reinstatement of political status for IRA prisoners in Northern Ireland.

One thing they definitely do not have in common is subtlety. Where PASSION essentially speaks the language of the blockbuster (sweeping music, crane and helicopter shots, CGI effects), HUNGER is a lot more subdued and reserved. It’s a movie that very clearly lays out all you need to know in long, quiet shots laden with information. Prisoners futzing with torn-off bible pages to roll cigarettes, building little drainage systems out of mashed potatoes and poop so they don’t have to sit in their own pee. A prisoner pawing at a fly to play with it out of sheer loneliness. A prison guard’s frustration at his cruel occupation manifesting itself in what appears to be straight up zombieism once the card is punched. And in the midst of it all, Thatcher constantly on the radio assuring everyone that none of the prisoners will get a political status.*

Steve McQueen and Mel Gibson are very different filmmakers, and HUNGER and PASSION are very different movies in the end, despite their similar motifs. McQueen is a craftsman, telling a highly effective story in a highly effective way. Gibson is a huckster, who’ll use every trick in the book to just make his product look slick and sell his message. In what is no doubt the most amazing scene in a movie full of them, Sands meets up with his old buddy Father Dom Moran (Liam Cunningham, who’d join up with Fassbender again in Neil Marshall’s awesome CENTURION) to inform him of his intentions to go on hunger strike. Moran thinks this is futile, as provo goodwill is at an all-time low, and Thatcher can easily afford “a couple of starved terrorists.” In a truly tour de force one-take scene that runs over fifteen minutes, Bobby and Dom lay out the pros and cons of a hunger strike, and we get to know a bit (a lot) more of what makes Bobby tick. He may have become a martyr, but he was never a saint. Dom quite rightly points out to him that the timing is all wrong for a (successful) strike and for god’s sake Bobbeh you have a SON!

The last fifteen minutes are Fassbender wasting away, which is painful to watch, of course, but the movie has given you plenty to ponder while this is happening. I wanted to say “to chew on” buuuuttt…

Whereas PASSION is simply Jesus getting beat up for two hours (context-free!) with very clear good and bad guys (oy vey!) in a story designed to make Christians feel righteously persecuted, HUNGER never takes sides. The provos and prods are both shown to be conflicted about the terrible shit they do. But terrible shit they do nonetheless. Even our protagonist embarks upon a possibly pointless death march, despite living relatives. Conviction and righteousness are there, sure, but Sands is definitely also an arrogant man.**

Sands: Do you think God will punish me?
Moran: If not for the suicide, then at least for your stupidity.
Sands: That’s the difference between us, Dom. You say suicide, I say murder.

With the Occupy movement getting pooped on and the Eurozone slowly crawling out of the financial abyss, HUNGER served as a stark reminder of the absolutely medieval mindset our First World still finds itself in. In the most basic sense of communication, Sands was unhappy about his government. He was jailed for violent actions as a result of that discontentedness. When Sands engaged in peaceful protests to gain political prisoner status (NOT to advance his original cause in any way), he was met with a

Now take it back to the original dispute. Bobby Sands is not happy with his government. Now picture Bobby Sands being Robert Sands, C.E.O. of SHAUNTY O’LEPRECHAUN, Inc. Perhaps a foundry for rainbow-situated pots of some kind. Anyway, Robert Sands, CEO. Can you imagine him in a poop stained cell being starved to death because his demands of being able to talk to his fellow prisoners and receiving letters and parcels were just too radical? Yeah, me neither.

*If you watch the IRON LADY trailer right after seeing HUNGER, its can-do spirit will likely offend you even more than it had before.

**The neutrality of McQueen was not carried over to the network that was broadcasting the film! In a written epilogue, the film tells us about the effects of the strike: twelve people died from starvation, IRA hitmen killed 16 guards over the coming weeks and months and prisoner’s rights were improved somewhat (though never officially given the status of “political”). The network failed to subtitle the 16 dead guards.