Once Upon A Punch

There’s only a handful of stories, and endless spins on them.

Here’s a fellow that agrees with me: Vladimir Propp.

Contrary to what you might think from his name, Vladimir Propp was not a Death Eater. In the early 20th century, Propp was a literary scholar whose most famous work entailed the deconstruction of the Russian folk tale. Since folk tales by definition don’t have a clear author, what Propp essentially did was call every motherfucker in Russia’s nana a lazy, cheating bitch. But, you know, who can blame her. No mass media around in the Dark Ages! Can you imagine?

I vill tell you de story of de princess captured in de kessel by her djellus stepmuther!

I, uh, vill tell you… SACHA VATCH OUT A BEAR

Propp proposed (had to do it) that every fairy tale basically had the same structure, and 7 possible “actants” or plot movers.

During Propp’s lifetime, Finnish and American scholars Antti Aarne and Stith Thompson combined forces like some sort of (more) dorky Captain Planet to make the Aarne-Thompson classification system. Well, technically, it was just Aarne’s list, which got expanded upon by Thompson in ‘61, 50+ years after Aarne’s original 1910 publication. That’s when the numbers came in.

We still kinda use these structures in our movies of today! Case in point: 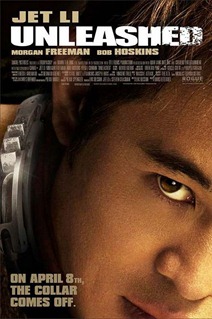 Or as Aarne-Thompson would call it: 310. The Maiden In The Tower. Or, you know…

Jet Li’s tower is a mental one, as he is kept on a leash by Glasgow gangster Bob Hoskins. When the leash is on, he’s a docile manchild who barely speaks. Once it comes off, he kills everyone in the room. Hoskins has built a decent criminal empire based solely on “Danny The Dog” and two comedy henchmen to drive him around. Due to circumstances, Danny is released from Hoskins’ grip and meets up with a BLIND BLACK PIANO TUNER NAMED SAM. Sam (Morgan Freeman) is also the guardian of Victoria, an “18 year old” Kerry Condon who I swear is absolutely lovely on HBO’s Rome but is like a bracefaced Jar Jar Binks here.

The biggest criticism the movie probably gets is how completely saccharine it turns once Jet Li gets taken in by Morgan Freeman and learns to be a real boy. The action completely falls by the wayside in favor of knocking on melons to see if they are ripe and perhaps an ice cream headache or two. Now, if you’ve seen some other Besson movies, this totally falls into his wheelhouse. In fact, I daresay that some of the more “lad-friendly” elements felt shoehorned in to me. In the script stage, Besson was probably totally seeing this as “a martial arts fairy tale” or some shit. Then Louis Leterrier (TRANSPORTER 2!) comes on and adds blue filters and completely out of place titties! I mean, at one point Li is fighting a big mini-boss type and he crashes into someone’s bathroom. He tries to sneak out while the apartment’s owner is under the shower and hasn’t noticed him. Stroking my chin thoughtfully, I wondered if it was going to turn out to be a busty model under the shower (COMMANDO-style) and yep, once the bad guy busts in too, they fight all around the bathroom and… yup.

It’s actually totally funny to notice how the skeleton of the movie has this RAPUNZEL structure, and the actual nitty gritty of the production is straight out of a fucking 80s Cannon production. Extra lulz: When Hoskins brings Li to the UNDERGROUND FIGHTING TOURNAMENT, he might as well have brought the princess to the dark forest – there’s crazy rich people with Goku hair writhing in masses like orcs and the other fighters are armored and carrying fucking SPEARS AND BATTLEAXES. Meanwhile, the mini-boss he fights in the bathroom? He’s so visually distinct from the rest, he might as well be Queen Hoskins’ Black Knight or Chained Dragon or whatever: albino white guy dressed as a samurai.

A last word of… maybe not defense, but clarification. Sam’s character is quick to be deemed a “magical negro”: blind, musical, always chucklin’ and helping our main character out. But I think you have to take into account that this script was written by a Frenchman. Also note that his (white) adoptive daughter shares many of the same qualities. I think an influence that can’t be discounted here is simply the European stereotype of Americans – within five minutes of meeting you, an American will have told you his life story and invited you into his house. This doesn’t entirely excuse making him a blind piano tuner named SAM PLAYITAGGEN (surname maybe not correct), but it at least provides a fresh perspective.

Watch this movie! Jet Li headbutts a bunch of dudes!