The sixties were a magical and wonderful time. 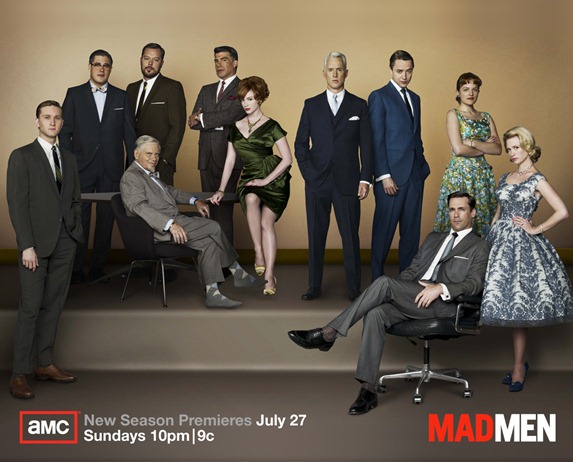 Unless you were black.

Or leaned to the left.

I usually don’t return to my previous subject as quickly as this but since my last post on whether or not Don Draper was an asshole or awesome, I’d gotten a few interesting responses from a variety of people. They basically all boiled down to:

You can’t make such statements so early in the show!

…which kinda surprised me, since my general conclusion was simply that Draper could be both extremes (often within the same episode) and that this was the hallmark of a good show. But as always, I like to engage in a dialogue with my audience and since conversation is an art, I would greatly appreciate us chiseling/painting/pooping this one out together as I write something about each season of MAD MEN.

This season was all about confronting Don with his immaturity. After a vaguely un-PC stereotype of a comedian hinted at Don’s infidelity to Betty (with his own wife, no less), Housewraith decided she’d had it with Don’s shit and threw him out. This befuddled Don to such an extent – and Don’s quite a champ at being befuddled – the dude undertook a vision quest to the mystical land of Callehfornayay. I was seriously kinda feeling shades of Heart of Darkness/APOCALYPSE NOW with Anna Draper as a sort of inverted, benign Kurtz who gives Don his (admittedly kinda heavy-handed) rebirth. Full of contrition, Don returned to the East Coast (apparently still not equalling Roger in terms of days off) to face the rather debilitating news that Betty is expecting another baby right as the nukes seem ready to go off – the season finale is set against the Cuban Missile Crisis.

The show has gotten under my skin to the extent that I like the INCEPTION-style uncertainty of the season’s ending leaving hope for a reconciliation. But one thing I really hope both Don and Betty learn is that women don’t have to be Jackie or Marilyn, they can be whoever the fuck they want at any given time. Let ‘em be Anne Ramsay if it makes ‘em feel good. It didn’t even really piss me off that Don had affairs; it pissed me off that he had affairs and then all but calls his wife a whore when she buys a bikini.

Sal and Kitty: god, if they’d met in, like, 2005 they’d probably be BFFs and go shoe-shopping together. Now all they can do is ruin each other’s lives while probably still caring about each other.

Sally Draper: the sweetest kid in television history? If the Venture brothers had a sister, she’d probably be it. Mixing drinks for the grown-ups, clumsily doing chubster-ballet, telling awful knock-knock jokes… every enchanting thing she does just drives it home more painfully that with parents like Don and Betty, this kid is about as fucked as if she really did grow up on the Venture compound.

In comic book news, Housewraith disavowed any affiliation with Boitaku after he spent a couple of days in her… well, not treehouse but… plastic… lawn house? Anyway, Glenn’s creepiness is explained after we find out that he’s a comic book aficionado (I wonder how much actual Silver Age Action Comics and Metal Men cost them, or if they got ‘em on loan or something). Don’t worry little buddy! Platinum will never leave you like that bitch Betty!

I’m greatly looking forward to season 3, if only to find out how much more miserable the lives of the characters can get.

No wait, I would be remiss for not mentioning the lovely Rachel Menken (Maggie Siff) having found herself a schmuck of a husband and Peggy finally getting an office with her name on it and stop-the-motherfucking-presses some fairly consistent recognition from her male colleagues.