Why Cobra Is Cooler Than The Driver

Since the release of Drive, I’ve been hearing a lot of mumblings over the interwebs about COOL.

Ryan Gosling’s nameless Driver in Drive is COOL. He’s the classic archetypal silent tuff guy, never saying more than needs to be said, doing everything with clockwork precision and deadly accuracy. He even has a recognizable badass getup: leather racing gloves, bowling jacket with a SCORPION on the back, toothpick in his mouth… the works.

But the Driver is actually not cool at all! You know who is? 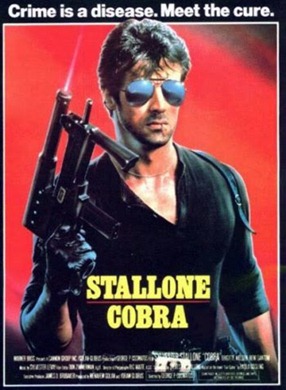 That’s right motherfucker, Cobra is cool. Why is he cool while the driver isn’t? They both have same over the top badass attitude, they both waste bad guys with aplomb, they even have a similar getup almost sorta! The answer, my friends, is tone!

Let me get one thing out of the way first: I think DRIVE is an excellent movie that I would recommend to anyone with a brain in a heartbeat. I hate doing the apples and oranges thing, but (fuckin’ SIGH) to just really get my ass out in the clear here I’m also gonna state that DRIVE is a much better movie than COBRA.

But alas! Director Nicolas Winding Refn is trolling you, kind sirs! In an excellent interview with the AVClub he calls DRIVE a “fetish film”. And he’s actually very literal when he says that! In VALHALLA RISING, Refn asked us “What is the deal with religion?” (Refn likes Seinfeld, okay?). In DRIVE, he asks us “What is the deal with movie badasses?”. They’re always on top of things! They’re so in control and skilled and successful all the time that they should be pretty much millionaires doing whatever it is they do! Well, how do you get into Carnegie hall? Practice (TCHAWN PRAKTESS)! The Driver is shown to be a socially pretty backwards guy, who basically just spends his free time honing his skills, working on engines, doing getaways and stuntin’ for the movies. When he bumps into Carey Mulligan and her son at the store, he bashfully moves to the other aisle! Now there’s nothing about these things that stands in the way of the Driver being cool. But AH! Yon scorpion jacket betrayeth thee, Madam!

The Driver is a STONE COLD PROFESSIONAL that doesn’t have time for simple pleasures like a family life! He only says what needs to be said! No time for bullshit! But… the scorpion jacket. He wants to look cool. He works really hard at it. He’s got all the skills to back it up, but goddammit… the talking thing is hard. I know! I’ll just let a cool outfit say it all for me! I won’t have to say a thing! The deliberately slow-paced first act is all about letting you know this guy: he’s a creature of habit, a creature of dedication, a creature of awkwardness. But he wants to be noticed. He wants to be found cool. The jacket, the glove, the toothpick… that’s a lot of image building for a guy who doesn’t really have a life.

Now, in COBRA, we don’t really get many scenes of Cobra’s home life. As you can see in the poster, there’s definitely the calculated look. He even has a trademark fifties oldtimer. In the first scene where we see Cobra at his apartment, he gets hassled by some no-good Reagan-era eses. They wanna get rough, but Cobra rips the main guy’s shirt down the front to his belly. This immediately appeases all of them, and they turn into jolly and polite mariachi! He comes in, puts his gun in the fridge and cuts some cold pizza with scissors as he watches the news (which just happens to have a plot-advancing report on).

HEY MAN i hear you say WE ALL PRETTY MUCH GOT THAT THE DRIVER HAD SOME SORTA PSYCHOLOGICAL PROBLEMS WHEN REFN LITERALLY PUT HIM IN A MICHAEL MYERS MASK to which I say okay man don’t yell jeez. But also I say: this immediately exempts the Driver from being COOL.

Refn is essentially a big troll, telling us a joke and explaining it while he does so. No joke is funny if you have it explained to you. There’s no mystery in a magic trick once you’ve seen how it’s done. Seeing a badass try really fucking hard at being badass negates the effort. Cool is effortless, it’s a funny joke, it’s a magic trick, it’s chemistry.

Some say DRIVE is a triumph of style over substance. I think it definitely requires some viewer participation. The first act is all about simultaneously building up and tearing down the Driver. This is who this guy is, he’s pretty badass, but ain’t he also kind of a loser? And when he starts kicking ass in the second half… who do you root for? This blank, boring wannabe? The nice lady he met (but isn’t really in the film all that much anymore)? Marlin and Hellboy, the infinitely more interesting-to-watch bad guys? Well no, they’re the bad guys. Refn promises you badassery, spends a whole lot of time tearing down the badass, then delivers. But do you still want it?

DRIVE is a very good movie. COBRA is a very cool one.