Why TWILIGHT Sucks (And Why It’s Okay)

Ooohohoho you are treading dangerous and iconoclastic ground here, Luca! A post denouncing Twilight as sucky? Surely, a vampire pun will soon follow! To which I would say no way man! The level that I am on is wholly above that! Ahem.

I’m going to admit straight up front that this post was inspired by JoBlo tweetin’ at the esteemed Film Crit Hulk over at Badass Digest, asking him whether someone had ever written something intelligent about why exactly TWILIGHT sucked. However I, always looking for DAT EXTRA ANGLE, thought that maybe it’s time that someone who doesn’t really like the series at all took the heat off. 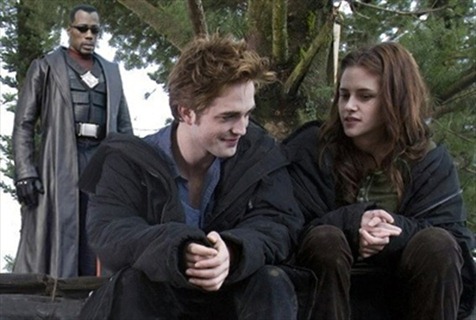 We’re gonna ice-skate up this hill in two parts!

Okay, so we’ve got a lead couple setting gender relations back about five centuries, set in a world where nothing interesting or imaginative happens*, populated by supremely attractive people. Why should we not boycott this with all our might (lol)?

In summary, TWILIGHT is popular because it appeals to some very base (and basic) desires, coupled with its core audience existing in a very corporate controlled environment. It would, however, be wrong to get up in arms about it, since most fans are (or will be, once they get out of adolescence) rational and critical people who can separate fact from fiction. And then sir, YOU would be the sexist! Some will grow out of it entirely, some will experience it as a gateway to other, better things, but only a minority will end up a female version of this guy***

*In the second movie/book, Jacob takes Bella to an action movie. It’s called something like THE BLOODKILLENING or some such Simpsons joke name. The normal human guy from Bella’s circle of friends that has a crush on her accompanies them, but he quickly blows his chances by getting nauseous from the stomach-churdling violence on screen. I love how out of touch this paints Stephenie “I have never seen an R-rated movie” Meyer to be. She thinks action movies are stomach-churning gorefests.

**Teenage girls are exempt from this, as in your teenage years everything is as dramatic as shown in TWILIGHT. Twi-moms though? They shoot up schools.