The Motion Picture of Dorian Gray

Sometimes you sort of stumble on a movie and you’re like what the hell, why not! Such was the case for me and 2009’s DORIAN GRAY starring beautiful Prince Caspian (he is an actor named Ben Barnes though he is not really a prince named Caspian). 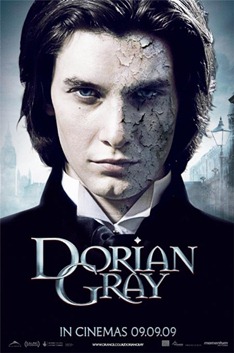 You’ve probably an inkling of the plot if you live in a First World country with internet access, but Doctor Who has taught me to be mindful of every world so:

Hot young guy comes to London, meets rich assholes. Has picture painted of him, says he’d sell his soul to look DAT HOT forever. Wish backfires when he remains the same but the picture takes on the signs of decay.

Okay, that doesn’t sound like THAT much backfiring but let me tell you, you’re not hanging that picture in your living room unless you’re Tom Savini.*

The two rich assholes are Lord Henry Wotton (Colin Firth) and painter Basil (Ben Chaplin). Both actors are super charming and witty, and make you not really mind that they are rich assholes. They take young Dorian a-drinkin’ and a-whorin’ and seem far more amoral than him. Wotton’s bon mot “There is no finer opportunity to hone one’s skills of deception than in marriage” should say it all. If it weren’t for these two, Gray probably wouldn’t have cursed himself unwittingly, nor would he have gone off the deep end as far as he did. I was actually under the impression (purely from the connotations that the name “Dorian Gray” carries in pop culture) that he would be a more decadent protagonist. But while he does indulge in vices from orgies to murder, it’s not a sudden turn *coughanakincough* from Johnny Appleseed to Stabby McGee. And he’s even repentant quite quickly!

Movies like DORIAN GRAY, to me, are kind of a bitch to try to assess. They’re obviously based on fantastic source material, so what do you review? I mean, it’s based on Oscar Wilde, of course the dialogue’s gonna be fantastic. And if you’ve got people like Firth et al. to deliver it, that’s half your movie right there. Unless you’re planning on spending your entire budget on SCONES AND TEXTING (that’s what British people do, right?) and then shoot it under a single fluorescent light with a webcam from 2003 with grease smears on the lens, I’d say way to fucking go director Oliver Parker!

As you can see in his credits there, Weird Rasta Mutant from NIGHTBREED is also totally the director of the fancy-pants adaptation of a gothic classic.

*Not adding a picture of the, um, picture here since it’s a third act reveal. It’s probably a lot more shocking if you’re an Edwardian lady/gentleman that has never seen THE MUMMY, however.