It is a truth universally acknowledged, that any man currently watching a romantic feature film, must not be in want of a wife, elsewise he would be watching a Jason Statham vehicle. 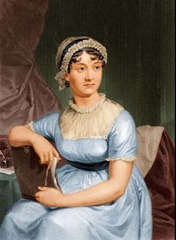 The preference of women for romances that expound upon their characters, as contrasted to men’s preference for romances that pound upon their characters’ faces, is a well-documented and oft-lamented dichotomy. But how the D– do they manage to keep up a productive and joyous marriage? Doth the husband not leave the room in a huff and engage in nine-pins whenever the wife, however dutiful in her disposition, endeavors to consume such literature as rewards its protagonists steadfastness and virtue with secure marriage bonds? And likewise, doth the wife not excuse herself presently to practice the clavichord, should the husband wish to partake in such narratives as engage in pugilism, costumed or otherwise?

My first brush with Jane Austen was an attempt at Sense & Sensibility in my seventeenth summer. I had seen the movie before that, but I remembered little from it besides Kate Winslet getting sick from walking in the rain too much and then marrying Alan Rickman. Since this was on TV before RUSH HOUR ever hit theaters, I had no means of identifying Tom Wilkinson. The book left a similar impression on me, in that I’m pretty sure that if I’d start reading it again now, I’d be taken by surprise by most plot twists. That, and complicated, long sentences.

After years of having it on my Big Pile O’Classics I Should Read Some Day Maybe, I gave Pride & Prejudice a shot a few months back. Maybe it was the years, maybe it was the mileage, but I found myself enjoying it, and a far brisker read than S&S to boot! Something that always irked me in popular fictions of yesteryear was the unflinching tendency of the writers to go phrenological. Not only were their protagonists shining exemplars of goodness, they had all the physical attributes to prove it! The typical symmetric cranium of a philanthropist! A dainty nose signifying inquisitiveness! Strong cheek bones indicative of great moral fortitude! Now, I’m not a big fan of long-winded descriptions (Tolkien is my enemy), so you can imagine that by the time your average 19th century pulp fictioneer was done describing his characters, I’d come to properly hate the character I was to follow for the rest of the book.

Not so with Pride & Prejudice, gentlemen! Granted, it’s not exactly pulp fiction, but people tend to throw “old books” on the same dusty mental pile. Lizzie Bennet, the main character, is actually pretty sharp! She lives in a world where a woman can’t have a job (except that one, I suppose) and all her hopes are set on marriage. Okay okay, I’m scaring the guys off here, but Lizzie totally makes it work! She’s not some marriage-crazed harridan, but rather a more laid back, witty person. She takes after her dad, Mr. Bennet, who also just prefers reading and being left alone. Two Bennet sisters straight up suck – no spoilers, I’ll leave it up to you which ones! Mrs. Bennet is an airhead whom Mr. Bennet admits he just married for her looks way back when (“Alas, they have faded!”). Mr. Darcy, Lizzie’s love interest, is a very singular literary character in that you can perfectly recreate him in ASCII:

But, you know, gotta give Austen a little leeway! She can’t just come out and call all these bitches out, simply because that shit wasn’t done back then. If you’re thinking Regency England is FOR FAGS BRO, consider this: every character in this book that posesses even a modicum of intelligence thinks the exact same thing! Besides the awesome ice burns Lizzie and Darcy give the norms, it’s kind of a sad meta-look into the life of an author that was mentally just centuries ahead of the curve. If you put some effort into it, you too can enjoy some really sweet burns directed at the establishment, the church and conformism in general. Plus, history!

Now I must address my male readership; I gave you the means to impress your significant other with considerably less effort than it otherwise would have cost you. Remember these things, read this book, wow your lover! If you are the non-book-readin’ type, the 2005 Joe Wright version is about as flashy an adaptation as you could make.