All in the game of thrones, yo.

Just one more beddy-bye until HBO commences its fantasy bombardment upon the oil fields of your cornea. That’s when the first episode of the long-awaited fantasy adaptation Game of Thrones airs on the prestigious pay-per-view channel. Based on the (too?) long-running George R.R. Martin-penned A Song of Ice and Fire book series, HBO is looking to get back into opulent, MA-rated period television in the style of Deadwood and Rome.

As a longtime fan of the books, I had been keeping tabs on whatever production stuff I could get my eyes on, and found mostly reassuring tidbits. With the pilot nearly upon us, my friend and television boffo Brendan approached me to do a weekly recap of the series. Seeing as how he hadn’t read a letter of the series, I thought or different POVs might indeed prove interesting. 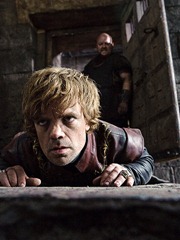 L: What makes you interested in this show, B? I can imagine that for someone who hasn't read the books, it can look a bit “been there, done that”.

That said, I like the fact that David Benioff, of 25TH HOUR, TROY, and a draft of WOLVERINE fame, is co-running the show. I think Benioff is one of these talented writers (and a fantastic novelist) who's maybe been strangled by the Hollywood system, and hope that TV will give him and his staff an outlet to shine. From what I've seen of the trailers, it doesn't look cheap, so I like that HBO is putting the same money behind it they did something like Boardwalk Empire.

But if I had to pick one reason why I'm interested in Game of Thrones, it'd be Peter Dinklage. The rest of the cast is filled with people I like -- Sean Bean, Mark Addy, Aiden "Tommy Carcetti" Gillen -- but Dinklage is what draws me to the show. When I was in college, I saw him play Richard III in a very small theater, and he was astonishing. If everything about the show is meant to be very Shakespearian and cunning and filled with whispered conversations in stone castles, I can't wait to see him bring the same energy he brought to Richard on a weekly basis.

L: Well, you're in for a treat. Dinklage is playing fan-favorite Tyrion Lannister, a little person nobleman starkly contrasting against his Aryan god-siblings. George R.R. Martin often described the books as "vaguely based on the Wars of the Roses", and Tyrion is the obvious Richard III analogue in that equation.

B: What do you like about these books/this material? And as someone who hasn't read the books, what should I know going into it? For example, I shouldn't be expecting Mark Addy to turn to someone and go "lightning bolt, lightning bolt," should I?

L: "A Song of Ice and Wire" is exactly how I sold the books to Wire-fans, and The Wire to ASOIAF fans. From what I've read, they've added some sugar to the pill of mostly-set-up Season 1 (think D'Angelo's flashback to the trial in the first episode of The Wire, when he stumbles upon William Gant's body -- a technique never again utilized throughout the show, and enforced by HBO because viewers wouldn't remember the guy from the start of the episode), so I'm hoping it grabs a big audience quickly. You can imagine how ecstatic I was when they cast Gillen as a scheming politician.

Like The Wire, once you start getting who's who, and what everyone's motivation is, the plotting is absolutely relentless. Don't get me wrong, I'm not saying it's as good -- it doesn't have any message about society or the human condition as urgent or specific as The Wire -- but the structure is there. You'll be hooked a few episodes in, if they pull it off.

There may be a bit of a tonal shift between certain plotlines that could possibly be jarring. The books' chapters are named after characters, which are dubbed POV-characters in fandom. For instance, it's considered a spoiler knowing which characters might become (or lose their status as) POV-characters in the next book. All but one of these POVs are situated on the continent of Westeros, the story's sort-of British Isles. One of them, though, is set "Across the Narrow Sea", and is much more of a Robert E. Howard barbarian story than a Medieval Wire. I found those chapters a refreshing break from all the plotting and intrigue, but your mileage may vary.

The magic conundrum: you won't hear Mark Addy call for any lightning bolts, because it's most likely his character doesn't believe in such. Magic is this vague, eldritch, unknowable thing, the province of village midwives and traveling mummer's troupes. My favorite example of it is when a bunch of people are cursed, and they start dying off in OMEN-esque ways, yet still in circumstances that aren't too fantastical considering their situations. So, as a reader, you're left thinking "Wait, what? Were they actually cursed? Was the hexer just a character with good insight and a lucky call?" The books don't give you a clear-cut answer. 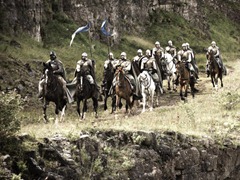 B: You mentioned that the land in which the story takes place is based on the British Isles. Is this one of those stories where it's a forgotten chapter from human history? Are all the characters "human," or are they other "races"?

L: As far as I can tell, Westeros (the planet is never given a name so let's just call the setting that) is not some forgotten pre-history like Middle-earth or Hyboria. Further proof of it would be the weird seasons. Summers lasting years, winters lasting decades. I think Sean Bean tells one of the kids in a trailer "You've only known summer all your life" as a "You kids don't know how good ya got it!" lecture. So, unless the series is ending with a straight up apocalyptic cosmological shift, this ain't Earth.

There are other races, but it's not like Star Trek where you've got humans and Klingons and Vulcans attending meetings together and shit. Like magic, non-humans are the stuff of legends and the dark places of the world.

You could make a case for the Targaryen siblings being non-human. They are the white-haired princelings in Conan Country who are plotting vengeance against Mark Addy, the usurper of their dynasty. The Targaryens' gimmick is basically that they're 100% inbred, and instead of retard babies, it's like the Super Soldier Serum. The reason for this is that they're like the only bloodline left from "Old Valyria", which is the world's equivalent of Atlantis, as I've understood it.

Is this already starting to confuse you?

B: Not yet! The Targaryens’ "special relationship," though, reminds me of something I've read about the books -- they're apparently pretty graphic, not just in terms of their violence, but in their presentation of sexuality, particularly adolescent sexuality. Given HBO's willingness to indulge the particular kinks of say, Alan Ball, is there anything that you think might not make it in?

There's actually one (arguably) healthy sexual relationship between two teenagers, but the show may be canceled before we get to season three.

B: As a fan, what's your best and worst case scenarios for the show? And how receptive are hardcore fans going to be to deviations from the text?

Worst case scenario (artistically): The child actors suck. That's seriously the only worry I have at this point. It looks opulent, there's some great genre actors, and the writers are of similar pedigree. Scott Templeton (I forgot his name)!

I-wouldn't-mind-this scenario #1: The show makes it to season three. With some creative rewrites, it would be a decent enough stopping point for the series.

The fans I've talked to have responded rather positively to the changes that have happened so far. The addition of an introductory scene to Dinklage's House, the aging of the preteens, ... . Might change, of course, but for fantasy fans, they're keeping a remarkably level head.

I feel like I shouldn't give you too much of an explanation on who's who (too late!), since that's something the pilot should explain. I'm really looking forward to seeing your reactions, and how well the writers do their job of getting that fuckload of information across to new viewers.

B: There was a great piece in the New Yorker this week about the whole "finish the book, George" phenomenon that I think says a lot about modern fandom. I'd like to hear your thoughts on it.

L: I think I share Neil Gaiman's opinion on it (how cool to be able to say that, huh?) in that George should take however the fuck long he wants about it. Playing devil's advocate for a second here, George DOES spend an inordinate amount of time at conventions, and he's a huuuuge merchandising whore. Writing updates? Naw man, but here's a new Song of Ice and Fire collectible figure or replica weapon that you can order for only $19,99!!!

Btw I am really fucking stoked for this show.

B: I'm actually pretty stoked, too. I missed Boardwalk Empire and while I dug Lights Out, I fell behind on it. And stuff like Justified and Sons of Anarchy are on my "to watch" list. But this looks like so much fun.

Game of Thrones premiers tomorrow, but will be repeated on every friggin’ HBO channel throughout the week.