Self-proclaimed VISIONARY DIRECTOR Zack Snyder returns to the screen with SUCKER PUNCH, an ode to everything nerds have ever found cool, ever. 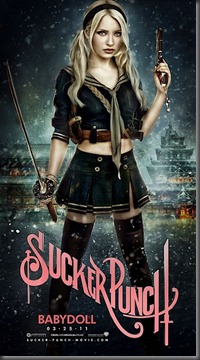 Like that picture? Well, I just saved you a trip to the movies. There is nothing to the heroine of this movie, or indeed the movie itself, but a pretty picture.

The great irony of the movie is that, in all its aspirations to critique female objectification in popular media, it forgets to make its own characters anything more than… well, babydolls.

Emily Browning’s character Babydoll is framed for murder, and expected to be lobotomized within a few days. She hatches an escape plan, and enlists four other inmates. The planning and most of the execution of the escape plan takes place in a fantasy whorehouse in which Babydoll and the other inmates are dancers/whores. Part of the plan involves Baby’s distracting of the staff/johns/pimps/orderlies with her dancing. Those dance scenes are the outrageous action scenes this movie was sold to you with.

I have to disagree with there being “no stakes” to the action scenes. True, they’re a fantasy within a fantasy, and the girls are invulnerable to the point where you think they’re powered by the rays of a yellow sun, but I think the stakes of the action scenes are not so much in “death” as in “mission failure” (to drive home the video game analogy so many are fond of). They fail, they get caught. I also have to admit, I did get a visceral thrill out of them being very well-staged.

The use of the action scene as a titillation, and the true stakes being women trying to escape patriarchal oppression is fine enough. It’s simple Screenwriting 101 where the movie fails: the girls’ goals are never really our own, because we simply don’t get to know them. I’m not asking for hammy Saving Private Ryan-esque “This is what I was like before I came to this HELLHOLE, maaaan!” monologues, but little moments in which we get to know the girls’ characters. As it is now, they’re mostly interchangeable, save for Jena Malone’s Rocket and Abbie Cornish’ Sweet Pea.

Surely, Snyder did not mean for this particular ironic detachment, did he?

I used to think of Snyder as a boozy, coke-addled frat boy. After SUCKER PUNCH, I think I see him more as a slacker pothead. This movie is obviously the result of him and his wife/friends hitting the bong, coming up with some whooaaaa deep stuff, and basing a movie on it.

And hey, nothing wrong with that, I’m sure many great works of art found their original inception (brrraawwww) in the hazes of a Byronic stupor. It’s just that, like the experienced marijuanist, Snyder woke up the next morning, realized he’d actually have to do some more work beyond the ideas he scribbled on his rolling paper and just said “awwww man now I actually gotta do this thing”. I mean, I can seriously picture him showing up to the WB offices, sweating profusely and yanking his collar professor Frink-style, with a binder saying SUKKA PUNTCH SKREPT and it’s just the script to FREDDY’S DEAD: THE FINAL NIGHTMARE with the title altered or something.

Zack, the next time you have an idea; that’s good, man. Ideas are super. Plato was all about that shit and people certainly don’t talk about Plato saying “Oh man, Ozymandias having a folder on his desktop labeled “Boys”? Gimme a fucking break!”

But what you need to do then is find one of them dudes that takes ideas and puts them on paper so audiences understand those ideas and say “Oh okay yeah, that was pretty cool” instead of “All that and not even a gratuitous titty shot”.

Oh wait, that’s objectifying. GODDAMMIT SNYDER YOU GOT ME