No One Leaves Harlan Alive

Following up the first season of Gossip Girl with the first season of Justified is a bit of a culture shock, to say the least. It’s a looooong drop from the towering spires of decadent Manhattan to the woodland meth labs of ole Kentucky. For the viewer as much as protagonist Raylan Givens (Timothy Olyphant), a deputy marshal stuck in his ways somewhere right after the Civil War. Givens is “exiled” to his hometown of Harlan, Kentucky after shooting a dude in Miami. I was immediately endeared to this soft-spoken southern gentleman, seeing as how the reason he shot the guy was basically that he’d shoot him if he didn’t leave town. Towns were not left, guys were shot. For the observant among you, the guy in question is character actor Peter Greene, whom you may remember as baddie Dorian from Jim Carrey’s early hit The Mask. 2010 Dorian looks like he has cancer, aids and drank from the wrong Grail all at the same time.

Givens isn’t happy to be transferred to Harlan. His grifter pappy Arlo, his childhood sweetheart Ava, and a surprisingly florishing drug business all contribute to Raylan’s gentlemanly headache. But most of all, Raylan has his hands full with his former best friend Boyd Crowder (Walton Goggins). 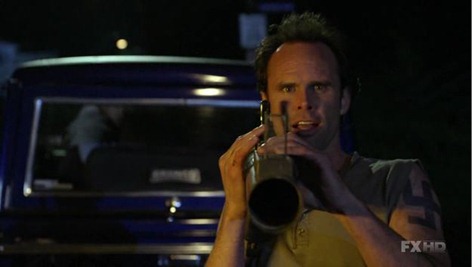 Goggins is the show’s ace in the hole. Raylan and Boyd are pretty much on the entirely different ends of the spectrum. Think of “the South” as an idea, a collection of stereotypes you’ve acquired throughout your years/decades of pop culture consumption. Now try to put all the good things in one column, and all the bad ones in another. Chances are the former will be a pretty good description of Raylan, while the latter fits Boyd to a (swas)tee(ka). They’re like Batman and the Joker, if the Joker were a little stupider, and Batman a lot more likeable.

Unfortunately, Boyd gets shot at the end of the pilot and spends most of the remainder of the season in hospital/prison. This pretty much condemns the first half to a “crime of the week” format that unfortunately doesn’t really do the show justice. It is, of course, purely in the realm of comic book fantasy (Raylan is under investigation for shooting a guy, but then just merrily shoots at least one other guy per episode) but the show works best when it’s dealing with themes of friendship, loyalty and betrayal. Hell, Raylan doesn’t kill Boyd in the first episode because they “once worked the mines together. Hell down there.”

There’s an easy, affable charm to Justified, carried mostly on the shoulders of Olyphant and Goggins. It’s really astonishing coming from backstabbing BFFs Serena and Blair to the constantly-giving-each-other-another-shot enemies that Raylan and Boyd are. Is this the difference between a boys’ show and a girls’ show? I haven’t seen enough gender-specific shows to be able to tell. I just know that come February 2011, I’ll be itching to find out what kinda shit Raylan and Boyd have gotten themselves into. I hope that by then the show has gotten a little “bigger”, and escaped its TV feel. I mean hell, I’ll have seen one hell of a western by then. 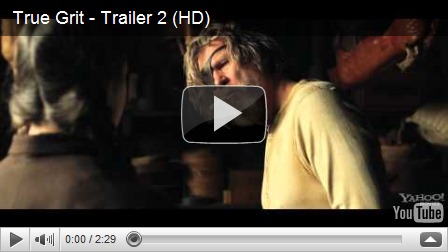 The 10 Biggest Annoyances in Mass Effect 2

After my forays into “icky girly cootie” and “artsy fartsy awardsy” territory in my most recent posts, I thought I’d venture back into safe nerd territory like the wild Kevin Smith after making a PG-13 movie. In yet another first for Wholly On The Level, this article is a collaboration between myself and fellow Gossip Girl enthusiast Matthew “Notorious O.W.L.” Hedgecock.

Mass Effect 2 is a superb action RPG, filled with great writing, amazing set pieces and most importantly the illusion that you, as a player, have a significant impact on the game-world at large. But nerds wouldn't be nerds if we couldn't nitpick. Here are the ten biggest annoyances of Mass Effect 2!

Take it away, Matt! 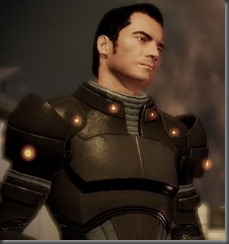 Sup Kaiden. Boy, I’m sure glad I don’t have to talk to Ashley in this playthrough. Now please take those fucking Christmas lights off your shoulders and quit dressing like an asshole.

Note from Luca: God, I should have known there’d be at least one fashion complaint in here.

2.) Ashley Williams
Urrggghhhh. Remember those spikes of hot regret you felt in Mass Effect 1 after you left Kaiden to die on Virmire? Yeah, they’re back, and they hurt just as much as before. Here you are, back from the dead, having just slaughtered an entire legion of Husks and Collectors and a NIGHTMARE FROM HELL Praetorian all while managing to save half a colony of space truckers and what is your reward?
You get lectured at by racist, trigger-happy Fundamentalist. Thanks SO much BioWare, I really wanted to get sermonized about what an asshole I am by a character who is SO AWFUL that she has the ability to kill Wrex – THE BEST CHARACTER - in the first game! Please, God, let her get roasted on a spit and eaten by Krogan in ME3.

P.S. God help your soul if you romanced her in the first game. Thought you avoided her awful slam poetry this time around? “Commander, you have received a new message on your private terminal.”

3.) Harbinger’s smacktalk
“If I have to tear you apart Shepard, I will. I know you feel this. Leave the dead where they fall. Your form is fragile. Your form is so fat, I thought I was fighting a volus. Pathetic mortals don’t know how to shoot freethrows. Entire squad is babies. I’m not talkin’ about dance lessons, I’m talking about taking it out and chopping it up, Shepard.”

Granted, Harbinger’s constant prattle makes you want to kill him more AND informs you that a powerful enemy is on the battlefield. But who would have guessed that an ancient race of sentient machines with unknowable motives would talk shit like a 12-year-old in a Halo match? 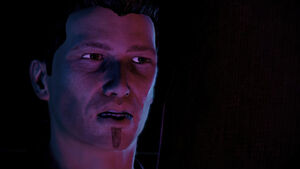 Fuck is wrong with you, Kasumi.

Lucanote: Kasumi does redeem herself a bit by going into a haiku-writing lust frenzy for Busta Rhymes-alike crewmember Jacob not long after Keiji’s death.

5.) No female Turians
This is a pretty nerdy complaint because clearly this is a development limitation. But there are good reasons given as to why you don’t see female salarians or krogan, and volus and elcor aren’t common enough to really warrant attention.
But damn – you can fly from one end of the galaxy to the other and not see ONE female Turian? Better watch out, FemShep, you’re gonna have a mess on your hands after Garrus pops that heatsink.

6.) The ramen stand
Just someone tell me why this is here. So Grunt and Kasumi can make one-time comments about it if you just so happen to take them down there? Sorry, that’s not a good enough reason to have that asshole chef shout GOMOSHEVASS or whatever the hell he says every time I pass by him.

The ramen stand is a mystery. A shitty mystery.

Luca NOTES!: Your shameful racism, however, is plain for all to see.

7.) Jaroth’s carelessness
I wish all enemies were careless enough to leave their evil plans out in the open for you to read freely WHILE STANDING IN FRONT OF THEM. Stopping Hitler would have been a lot easier.

Luca sighs: I’ve played this game twice now and I had to look up who Jaroth was. He’s the devilishly crimson salarian who’s the leader of one of the teams trying to take down Archangel. He wants to organize a mafia coup on Omega, but foolishly lets all his iPads lay around for Shepard to read and later tell the don about.

8.) Cerberus acting retarded
About ¾ the way through the game, Shepard is tasked with scouting the inside of a derelict Reaper for the dead machine’s IFF. It’s a great mission – scary, tense, and difficult in a way that few other missions in the game are.
Plotwise the mission is very good, except that it continues the trend of Cerberus behaving like total fucking morons. OK, so a science team has gone missing (of course) and when you get there you find out they’ve been turned into Husks (of course) but what’s more surprising is that the team was apparently LIVING in the Reaper while they studied it.
Come again? Whose idea was it exactly to set up residence inside of a demongodrobot from beyond space? Sure, screw-ups are pretty par for the course for Cerberus – these people have a “Jurassic Park” type incident on their hands every damn week – but this one just seems particularly stupid. I think they know enough about Reapers at this point to know it wouldn’t be a good idea to crawl up one’s ass and make themselves at home.

Eye-rolling Luca: At this point Matt quit writing his “ten” biggest annoyances, mailed me what he had and somehow left a garbled message on my voicemail containing heavy breathing and repeated use of the word “Ga’hoole”. So without further adue, the final two annoyances of Mass Effect 2!

9.) Cockteasing bullshit
For a game company that is deservedly well known for its gay-friendly writing, ME2 is strangely devoid of any possibility of same-sex romance. It’s very likely that this was a time limitation issue, but compared to any previous Bioware games the STR8Z UNLEE limitations stick out like a conservative thumb. The set-ups are still in there: Tali, the quarian mechanic, speaks of her species’ intimacy rituals and shyly suggests that she’d be honored to go through one with the female player. Which is then never followed up on. Jack, the telekinetic criminal tells you of her polyamorous experiences, but rudely shoots you down if you hint at any interest. Sorry, my canuck developer friends, but I don’t buy it when this character

doesn’t at least swing both ways.

10.) Give me ze detonators, Mr. Shepard!
A shady racist organisation that’s not afraid to kill as many beings as it needs to advance “human interests”, headed by a man who does not ever confer his real name AND WHOSE EYES GLOW IN THE DARK, asks you to hand over the base of an advanced alien race you’ve been fighting throughout the entire game. As a player, you’re given the choice to just blow up the base or set off some sort of special bomb that kills every living organism in it. I understand the importance of clear-cut binary choices in a game like this, but come the hell on. Who would ever think under any circumstance that handing over a facility that is somehow able to produce Godzilla-sized Terminator foetuses to an organization of space Republican-Scientologists is even close to a good idea? The only reason I can see for handing over the base to Cerberus (said organization), is just a morbid curiosity for how it would affect the third game. Which I, of course, succumbed to.

Please succumb to your own base instincts and tell us what nitpicks you had with this otherwise quite amazing game in the comments below!